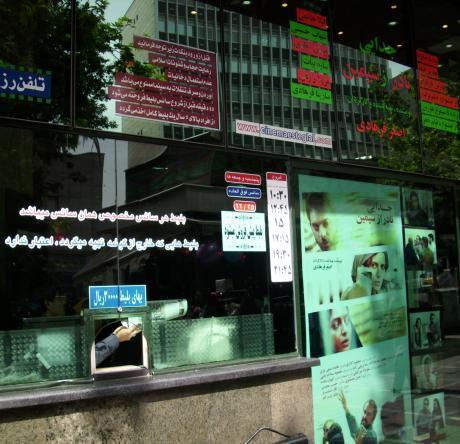 With the announcement of the Oscars nomination “A Separation” is nominated for 2 Oscars!  In addition to Best Foreign Film it is also nominated for Writing (Original Screenplay).  At first I was hesitant to write about this movie because in my mind I didn’t want to jinx it!  I wanted to write about it AFTER it had won, but with two nominations that’s just too good to pass up!

So it is a great pleasure to see an Iranian film receive two Oscar nominations and deservedly so.  All those Iranians (everyone is a film critic nowadays 🙂 who write about this movie being “sad” should just STFU!  Seriously.  They know nothing about critically acclaimed movies and think just because a movie is in the running they should run their mouths.

The last several Oscar winners in the Best Foreign Film category were all “sad”, so much so that A Separation is Laurel and Hardy in comparison.  Last year’s winner was In a Better World which was a film about a doctor going to remote places in Africa treating patients.  Some of the patients were women who were pregnant (yes pregnant) and raped by a sadistic Warlord who after raping them would cut their baby out of their wombs and the women who were left to die were brought to this doctor by their husbands or fathers and then the doctor had to treat them.  Long story short, the doctor’s marriage was falling apart and while his son was becoming friend with another crazy kid who wanted to make a bomb and blow someone’s car, went back to Africa and ended up treating the then wounded sadistic Warlord, and the story goes on.

Not just last year’s winner pretty much every year a “sad” drama wins this category.  Hardly ever a comedy and yet we want an Iranian comedy!  For those who don’t want to become “sad” there is news, actually old news, that there are dozens upon dozens of Iranian comedies made every year.  In my recent trips I bought and brought dozens of them here because I didn’t want people to nag, I wanted them to see these comedies and enjoy their time.  So you can do the same watch the comedies and don’t make stupid comments about “sad” Iranian movies.

Life in Iran is fucked up, how else you’re supposed to portray it?  Actually, most of Iranian movies have elements of comedy in them, like a dramedy, but that may not be enough for some.  Movies in general are supposed to take you to another world and live the lives of those people for couple of hours.

Enough about the naggers.  For the rest of us we should enjoy this time regardless of whether or not it wins one or two Oscars.  It’s like buying a lottery ticket.  Until the drawing day you keep dreaming and thinking what you’d do with all that money!  You buy houses, condos, cars, charity, family and so much with that money!  I am doing the same with A Separation and this lottery promises to be a winner more than any other time that I have bought a ticket!

So much is being said, so much has already been said.  Farhadi has already said the right thing in Golden Globes when he said his people are peace loving people.  He keeps saying the right things.  This is one of those rare occasions, like the National soccer team being in the World Cup, that the Iranians come together.  From Khamanei to MKO to Monarchists and everyone in between roots for the same team and now the same film!  Though some are conflicted over it for one reason or another, I say some and that probably means a few thousands at most amongst the 70 million or so Iranians.

I leave you with Farhadi’s latest comment in an interview.  What he thinks the ending and the choice for the 11 year old daughter mean:

“In a sense, human agency has decreased,” says Farhadi. “The characters are inherently good, but their environment pushes them to fight with one another.”

At the end of the film, when Nader and Simin proceed with their divorce even after Agha Joon’s death, the final decision of whether to live with Nader and stay in Iran, or leave the country with Simin, lies with their child, Termeh. It is a great burden for an 11-year-old to bear alone, but it is something she must do, according to Farhadi.

“Termeh represents the future generation in Iran, which will eventually attain freedom,” says the director. “But in Iran, we think democracy means comfort, when in fact freedom means having to bear responsibility, which is difficult. Thus Termeh is experiencing freedom: but it is painful.”

Photo caption:  Cinema Esteghlal in Tehran when it showed A Separation last spring.