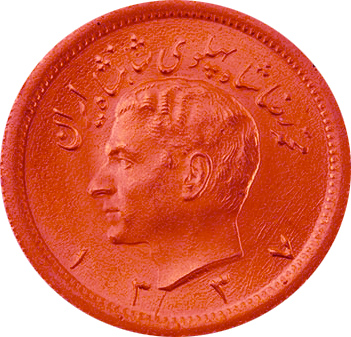 Do not be duped to Purchase fake replicate Pahlavi coins being falsely misrepresented and fraudulently sold as original coins, some times at hefty discounts. The replicate coins are minted using different years depending on the fraudster used for minting them in USA and Europe but the majority of the largest fraudsters’ coins are minted with the date 1337 (1958).

I have personally purchased and inspected one of these coins for comparison purposes. These fake replica coins are

(1) Thicker than the original;

(2) Larger in diameter than the original; and

So in addition to being fake, they are bigger, fatter but less “weight” and god knows how much of this weight is even gold as i didn’t conduct a metallurgical compositional analysis for purity.

Given that these a fraudulent replica counterfeit coins being falsely advertised as originals i doubt seriously that the little alloy used in the coins is pure gold and more likely only impure gold surfaced.

Counterfeiting gold coins and monetary instruments in addition to being reprehensible is a criminal act and will be prosecuted by the FBI in the USA and the Serious Crimes Unit of the Scotland yard in the UK. You will find these fake coins at many of these sites mixed together with originals of higher denomination.

In addition to the internet and on ebay, these fake replica coins are also advertised for sale on some Persian Satellite Channels and heavily advertised on Channel 1 by Shahram Homayoun.

If you are approached for purchase of such coins by such brokers, report them to the closest police station or FBI field office in your area.