Nothing really changes in the mindset of self destructing people 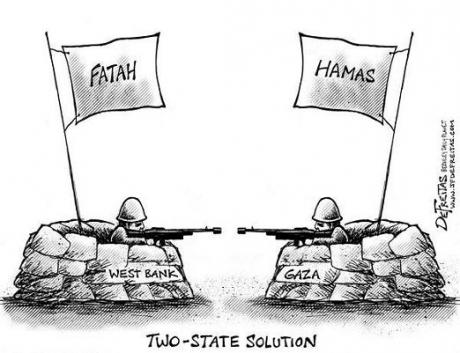 Time flies by but nothing really changes in the mindset of self destructing people. Reaching out, talks, cohabitation, and peaceful living are alien terms for these self destruct men. Show me a man who malfunctions and you will see definite operational failures in his demeanor with fellow beings. This is ABC of life. Individuals in a collective become a ‘state’ and when a state is led by self destruct mechanism nothing comes out of the state.

President Mahmoud Abbas of the Palestinian Authority embraced reconciliation with the Islamist movement Hamas yesterday, agreeing to head a unity government to prepare for elections in the West Bank and Gaza. Is the agreement between Abbas, the leader of Fatah, and Khaled Meshal, the head of Hamas yet another spasm of hope or beginning of a new mêlée for political control of West bank by Hamas until free elections are held?

Public opinion polls indicate strongly that the Palestinians want national unity and reconciliation, Abbas had no other choice but to play to the voters wishes. Hamas and Fatah leaders have different roadmaps one through continued war other through making a fragmented state of Palestine and recoup the momentum towards nation building.

Hamas will do well to read Pinkers “The Better Angels of Our Nature.” Enduring state of conflicts exhausts and consume nations, kills the incentive, annihilate any signs of recuperation or creativity and destine the young to a enduring begging bowl. No Palestinian deserves it.

Hamas entering this agreement can be easily explained. Syrian Assad impending exit has forced Hamas to relook at its policy of a continued war with Fatah. Hamas ‘rejection’ stemmed from the support it receives from Iran and the Syrians. That is now very shaky. Hamas hopes to win the Palestinian elections not only in Gaza but even in West Bank, this will secure their dream and long held wish of dominating the PLO. Abbas’s eagerness to let Hamas in is a significant victory for Hamas. In choosing to enter a coalition with Hamas, Abbas has chosen a new-fangled roadmap that may delay any meaningful settlement. In Palestinian politics has always been the race to bottom; the voter’s vote in the one who gets most bombs; most destruction; and heavier retaliation. Better life better human development index is not anywhere on the wish list of Palestinians leadership. This is the way politics is conducted i.e., perpetual struggle of minimum returns for the betterment of Palestinians.

The callous split at the heart of Palestinian national movement was an unpardonable internecine confrontation. The new development is anxiously welcomed since most unfortunately ‘Political Islam’ that Hamas believes has its own priorities; Peace and coexistence with Israel is not the main concern it is the maniac fixation with the annihilation of Israel.

Elimination of dissent is the primary object of Brotherhood as well as Iranian clergy; nothing can be resolved peacefully within the nations of Islam; hence bloodshed is a legitimate tool of statecraft. Assad used it mercilessly in Hama and Saddam deployed this to perfection during the Anfal campaign against the Kurds and Shiite genocide in the marshlands. Negotiations rarely work, muzzle of guns speak louder than reason, and the thirst of blood never diminishes.

The treacherous battle of Shiite and Sunni Islam in the heartland of Iraq is another unique example of this hysterical exposition of internecine abhorrence. People of peace and advocates of inter-sectarian unity have been totally sidelined. The mass frenzy of carnage has overtaken the hotspots of the Islamic world, and no one seems to notice that this is actually the consequence of continuous chastisement of ‘hatred against mankind’ that is now revealing its full impact on fledgling societies. The so-called blood-infested freedom struggles have come to a full circle and are now consuming the children of Jihad; the first victim of misplaced revolutions, rather, all revolutions, has been its own children.

Such naked and barefaced vengeance has seen very few parallels in modern history . . .

Hamas leader Khaled Meshaal talks with President Mahmoud Abbas during their meeting in Cairo May 4, 2011 last year. The callous split at the heart of Palestinian national movement was an unpardonable internecine confrontation. The new development is anxiously welcomed since most unfortunately ‘Political Islam’ that Hamas believes has its own priorities; Peace and coexistence with Israel is not the main concern it is the maniac fixation with the annihilation of Israel. I wrote the following in 2007 and I expect until hearts and mind changes nothing will change for the Palestinians. It is high time that they get busy living with each other instead of busy killing each other.

I wrote the following in 2007 and I expect until complete change of ‘hearts and mind’ nothing will change. There was no need of all this bloodshed between the brothers. It is so sad and so grievous! Always there has to be Either a King or a Sheikh or a Clinton to put them brothers to stop being bloodily belligerent towards each other.

A quick expanse of the hotspots in the Islamic world reveals a very repulsive and distressful drama unf olding very silently and unnoticeably. 6th of June marked the 40th anniversary of the beginning of the Six Day War according to the civil calendar. So how did the Palestinians acknowledge this significant date? They tore each other apart this time, unable to penetrate through the thick walls, the desire for blood now turns to their own. Of course, this ongoing conflict provides a ready made excuse for all the problems of Arab societies ranging from the national to the deeply personal. As Egyptian columnist Wael Abdel Fattah wrote in the independent weekly Al-Fagr newspaper that Arabs blame the defeat for “everything” – from “price hikes, dictatorship, religious extremism, sectarian strife, even sexual impotence.” The heavy fighting, pitting forces loyal to Palestinian Presid ent Mahmoud Abbas, aka Abu Mazen, against members of the Islamist Hamas movement, have not only revived fears of an intra-Palestinian civil war, but they have shattered the dream of the Palestinians gaining independence and ruling themselves as a sovereign nation at any time in the foreseeable future.