The World is Watching 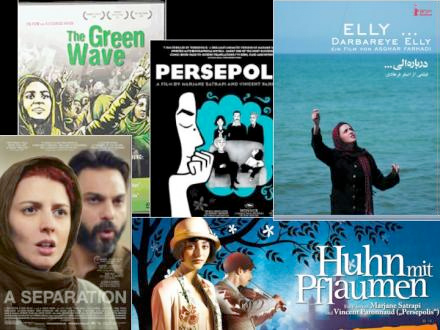 Before in two weeks time the 2012 Oscar will be awarded to the different categories of cinematography, I would like to say something about the state of the Iranian Cinema. This year, the highly acclaimed masterpiece “Nader and Simin – A separation” bythe prominent Iranian film-maker Asghar Farhadi is nominated as the best non-english movie and for the best script.

“Nader and Simin” was not the sole Iranian film who made it to the western screens during the last years. We were mesmerized by Ali Samadi Ahadis “Green Wave” and “Salami Aleikum“, by Shirin Neshats “Zanan-e bedun-e mardan (Woman without Men)” and by the magic realism of Marjam Satrapis “Persepolis” and “Chicken with Plums“.

Movies by Iranian directors who have the chance to work abroad (like Marjan Satrapi or Ali Samadi Ahadi) are extraordinary masterpieces, carrying a very unique handwriting of their directors. And they breath the spirit of freedom and of unlimited creativity. But because they are produced in the west, they attract much less media attention. The media and critics in the west too often judge a movie more by the cirumstances under which it has been produced, and therefore grant a movie that has been produced inside the country an extra bonus for “braveness”. And for this extra bonus there is a sort of common sense that Iranian movies which are produced in Iran (like those by Jafar Panahi, Abbas Kiarostami, Asghar Fahadi orMohammad Rasoulof) lack the very open, personal and experimental techniques and tough expressions, which are characteristic for movies like “Green Wave” or “Salami Alaikum” by Ali Samadi Ahadi, “Woman without Men” by Shirin Neshat or “Chicken with Plum” by Marijam Satrapi. How is it possible, that although anything else than happy ending soft-stories, these four movies leave the audience with a feeling of hope, with the confidence that even the biggest tragedy will find a solution, or at least a meaning ? Is it because each tragedy will loose its horror if it can be openly narrated, if a movie-director can say anything he/she wants to say, using the words and pictures he/she feels are appropriate in this very moment ? This way the most sad and even tragic stories like in “Green Wave” or in “Chicken with Plum” can be presented with the greatest of ease. Here, the movie will be a relieve for the director, for the actors and finally for the audience. Because the emotionally strong stories were transformed into movies with all possible and all neccessary cinematografic elements, the audience feels a strong satisfaction and happiness.

In contrast, the movies produced at home in Iran (like “Darbareye Elly” or “Nader and Simin – A divorce” by Fahadi or “Offside” by Jafar Panahi) can not make us forget that censorship is the dominating condition under which artists have to live and work. Each single word in a dialogue, every character, every scenery has to be considered under the threat of censoreship. The so-called “scissors in your own head” might help the director to finally produce a movie that passes the ideological watch-dogs of the regime, and therefore wont suffer too much from beeing “trimmed” by a uneducated beaurocrats. But the movie itself, even if it fullfills the highest standard of movie-arts and creativity, innovation and honesty, can not make us forget that it was produced under conditions of unfreedom. You still can smell the sweat of the film-makers from the fear of loosing the battle against the beaurocrats, you can feel the many frustrating moments they had when another brilliant idea had to be put aside, for the sake to get the whole project through the machinery. One feels that they had to carefully select their words and their pictures, and this leaves a feeling in the audience that not everything what should have been said and shown in the movie became real.

I still advocate the Oscar beeing awarded to Asghar Fahadi, I think the battle he fought against the dump and dogmatic Iranian censoreship and the excellent team work he set up with great artists such as Sareh Bayat, Leila Hatami, Peyman Hatami and many others should be honoured. I think that none of the directors that left Iran would have had enough mental energy to fight through all these odds as Fahadi did, always beeing aware of the risk to end up in prison or beeing sentenced with a ban to work, as his colleague Jafar Panahi has experienced it. For sure, neither Ali Samadi Ahadi, nor Marijam Satrapi or Shirin Neshat would have had the stand and the courage (and maybe other qualities as well) to go through all the husles and restrictions to produce their movies at home in Iran – but maybe under conditions of relative freedom they are the more innovative and creative art-directors. A case where an Iranian film-maker probably tried to get “the best of both worlds” was Bahman Gobadis “Kasi az gorbehaye irani khabar nadareh (No one knows about persian cats)” According to IMBD, “.. during filming, Ghobadi and his actors were arrested twice but released after giving presents to the authorities and lying about the real subject of the film.” This way Bahman Gobadi found a half legal, half underground style to get a movie approved by the Iranian authorities, although it was full of satyrical episodes and signs showing that a way-out of the misery requires the abolution of the dogmatic islamic laws of the mullahs regime. But this film must be considered a singular event.

In general, Iranian movies must be judged either by their political braveness (if they are produced inside Iran) or by the high cinematographic standard (when they are produced abroad). In the current political situation and at the degree of oppression of intellectuals and arts-people under the islamic regime I think it is legitimate to honour with the Oscar award the movies who are the result of a brave political fight. But in history books of Iranian movie arts, I believe, the films of the exiled directors Ali Samadi Ahadi, Marjam Satrapi or Shirin Neshat might be considered more innovative and of longer-lasting value.

This is, like any judgement about arts and culture, my very personal and subjective point of view, and the audience from inside Iran might have the exact opposite opinion (in case they are not jet completely spoiled by Holywood and Bollywood mass production).