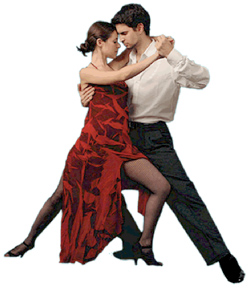 One year my mother and father took ballroom dancing classes. There was no one to watch me at home since my brother was away at college, so they would take me along.

They never felt comfortable in America in a way like it was theirs. But they didn’t have to call it theirs to be happy. Whatever happened, they knew there was one other person who knew exactly how they felt being away from Iran. It gave a lot of adventure to doing things like taking ballroom dancing classes together.

There was a boy there who was the son of the dance teacher. He was a few years younger than me and he was in charge of music. He and I would have to dance together. It was the one time I remember learning something and looking over to see my mother and father learning it too. I was ten years old. The boy, Almeido, was seven or eight. He took his job very seriously as a way to show that he was proud of his mother.

I learned the dances faster than my mother and father because they would forget and dance as though the music was Iranian music. It made me sad and happy at the same time. Sad because even dancing was hard for them when they were used to a different kind of music, but happy because they were trying.

My father would joke around a lot.

“This dance is called the foxtrot?” he’d say to my mother.

“Do they think we are foxes?”

“No. You are supposed to think about how a fox moves.”

“I don’t think I have watched a fox move in a long time. Where am I supposed to go to watch foxes?”

I would hear him and try not to laugh because Almeido would be dancing very seriously.

My mother would laugh but on the way home she would say, “We are never going to learn if you are always being funny.”

“I mean the whole thing is funny. One day we are in Iran trying to figure out how to live, and then the next day we are in America learning the foxtrot.”

That part of it did seem funny to me.

“Well, save your laughter for when we get home.”

“‘Save your laughter for when you get home.’ Okay. I can do that.”

But the next time we went, it would be the same thing – my father making jokes and making my mother laugh.

“That boy takes it more seriously than you.”

There was one day that Almeido was sick and I could only sit and watch my mother and father and everybody else. My father made jokes and my mother laughed. They were the only people to have their own language to make jokes in. I thought it would be strange not to have that, to have the same language at home as out in the world. It would be harder to makes jokes out in the world. I guessed that’s how it would have been if we had stayed in Iran, and I thought my father was right – it was the funniest thing to be in a different country.

“You ruined the class again,” my mother said on the way home.

“You said that you would save your laughter for when we get home.”

“It is because it might not be funny when we get home.”

“He was not there tonight. I was planning on dancing like him. I think he’s moved on to the advanced level.”

“Okay. Good. Next time I will watch him closely.”

My father watched Almeido next time but it only made him laugh more.

“Look at this boy,” he said to my mother. “How does this happen? How does a boy become a dancer like that? Do you know what I was like when I was seven?”

“You were not a dancer.”

“No. I was not a dancer at all. And yet here he is. You can’t argue with the logic of it. It is totally reasonable. His mother is a dance teacher.”

It gave me a nice feeling of Iran to think that everybody there was interested in the basic facts that everybody already knew. I knew my father was just one man, but that’s how it is when you’re from a different country and your mother and father are two of the only people you know who are from there.

My mother gave up on getting my father to take the dance class more seriously. She knew that she would laugh each time and I would learn the dances at least from Almeido.

“You are lucky,” my mother said when we were coming home from the last session of the class. “You are lucky that the teacher never said anything to you for all you jokes.”

“Did she want to say something to me?”

“Yes. She didn’t say anything because we brought Tala to dance with her son.”

“Is that why?” My father looked at me. I nodded.

“What a crazy world.”

The dance class was at the community center, and four times a year, once for each season, they sent out a brochure describing all the classes they offered. I would be very excited when it came in the mail because I’d want to sign up for the gymnastics classes.

The dance class was in the spring and when the summer brochure came, there was a big picture of my mother and father on the cover of it. They were smiling, looking like they were having a wonderful time learning how to dance.

When my father came home and saw it, he said, “It looks like we did learn to dance after all. I think I am doing the foxtrot in this picture.”

“No,” my mother said. “You are laughing at the foxtrot.”

My father looked at the picture more closely. “I think you are right,” he said.