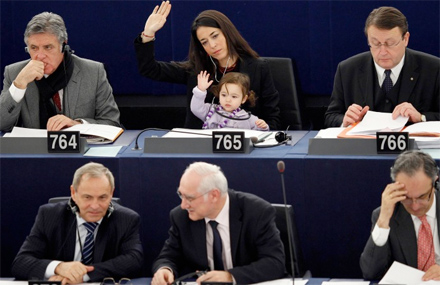 If you notice a particular number popping up in your life repeatedly, it’s a sign that an angel is trying to tell you something. So it is said. In the last couple of days I’ve seen the number 765 repeatedly, the last time in the photo above of Italian MP Licia Ronzulli who took her daughter to a European Parliament voting session. There is the little girl, perhaps breaking a tie vote on an EU financial bailout scheme.

A day before I was on a hunt to find the inventor of the Shiite concept of Taghieh, the religious mechanism that under certain circumstances allows a believer to lie without having it counted as a sin. Turns out it was the sixth Shiite imam, Jafar Sadegh. He died in 765 A.D. , some say because he ate poison that was pretending to be food.

And if you’re an early bird who lives in San Francisco and travels to Los Angeles as often as I do, then Southwest Airlines flight 765 must be familiar to you. By the way, this is also the Iran Air flight number from Tehran to Amsterdam. I’ve never taken that flight, but someone I know has. Saw the ticket in her hotel room.

So putting all this together, I’m supposed to come up with what my number angel is trying to tell me by repeatedly flashing 765 in front of me. Let’s see…during one of my flights to Los Angeles, I fall in love with a beautiful Italian single mom and I am tempted to lie to her about something having to do with my friend who’s been to Amsterdam. Or maybe it’s something else!