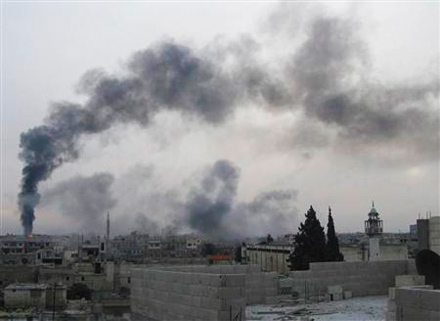 Seldom has the dividing line between the forces of moderation and the forces of extremism been so clear in the Middle East. The extremist anti-West, Iran-led Shiite Crescent, consisting of Iraq (largely operating at Iran’s behest), Syria, and Lebanon, heavily subsidized by Tehran with political capital and financial resources for the past three decades, is now under serious threat of collapse thanks to the crack in its most critical link: Syria’s Assad regime. On the other hand, the human tragedy in Syria has created a rare common interest between the old and the new Arab regimes, Turkey, the US, and the EU for the potential emergence of a representative government in Damascus.

Nonetheless, while Iran, Russia and China are doing their utmost to prevent the fall of Assad, the international and regional forces of moderation have yet to rise up to the challenge. Unless this loose alliance of moderate forces closes ranks and embarks on a decisive effort to break the Shiite Crescent, the Syrian people will be left alone to face a continuing massacre and will miss a historic opportunity to join a new, peaceful and potentially more democratically-oriented Middle East. Turkey especially stands to affect and gain from a more vigorous involvement of the forces of moderation.

On February 16th 2012, the United Nations General Assembly voted overwhelmingly for a resolution backing the Arab League’s (AL) plan calling for Bashar Assad to step down and strongly condemned the widespread and systematic human rights violations by his forces, further demanding that the government immediately cease all acts of violence. Although the UNGA resolution is not binding, it offers powerful moral support to the Syrian opposition, especially after the Russian-Chinese veto earlier this month of a UNSC resolution to the same effect. Equally, the UNGA resolution strongly fortifies the moral standing that enables the AL, Turkey and the West to venture beyond their current tentative positions, given the apparent failure of all other initiatives thus far.

The AL initiative, calling for a transfer of power to Syrian Vice President Farouk al-Shara’a, the formation of a unity government, and the referral of this initiative to the UNSC to assist in its implementation, has been dysfunctional from the beginning. A power transfer to the Syrian VP, even if the initiative had passed in the UNSC, would deliver zero change in Syria given that al-Shara’a himself has been a prominent member of Syria’s ruling apparatus for almost thirty years. A similar “VP scenario” proposed by the Saudi-led Gulf Cooperation Council, managed (though by no means perfectly) to defuse an explosion in Yemen. But whereas the removal of Yemen’s President Ali Abdullah Saleh has persuaded the Yemeni public, the problem in Syria is not with Bashar Assad per se but with the entire government apparatus within which he is encased. That is why the AL needs to avoid symbolic actions and face the reality on the ground, however bitter and unsettling it may be.

The other AL initiative calling for the UNSC to create a joint UN-Arab peacekeeping force for Syria, even in the unlikely event that it passes in the UN veto-controlled body, amounts to nothing more than another exercise of futility. For starters, there is no peace to keep in Syria. Suffice it to recall the failures of UN peacekeepers in Rwanda, Bosnia and Congo, to point to the UN’s inability to fill such a role in the absence of both peace and cooperation between the conflicting parties on the ground. Sending a UN peacekeeping mission to Syria at this time would only help the Assad regime stay in power even longer. Also, such a UN mission would most likely meet the same fate as the recently-withdrawn AL observers whose activities were controlled by the Syrian authorities and ended up playing into the hands of the regime. The observers basically stood idle while the massacres continued before the AL decided to suspend their mission. The UN peacekeeping force would have to be under the control of the UNSC rather than under that of the Syrian government mandated by the UNSC to move freely throughout Syria and report with no restrictions on the unfolding events. But then again the Syrian government is not likely to allow such a force to enter Syria, which could only further embolden the resistance to Assad’s rule while restricting the governments’ retaliations.

Finally, the reforms introduced by the Assad government such as holding a referendum on a new constitution as well as parliamentary elections, are merely a ploy aimed at buying more time. Therefore, it should come as no surprise that these bogus reforms have been supported by Russia and more recently by China. Being introduced by the very government whose removal the Syrian people demands, these reforms will not be accepted by the Syrian people who have sacrificed so much only to settle for the scraps exacted under duress from a government, which has lost its bearings and credibility. Assad and his cohorts refused to make a solid commitment, they were engaged in protracted negotiations to dilute any meaningful reforms, and subsequently, were involved in systematic prevarication – all the while persisting in violent crackdowns. Syria’s problem lies not in the wording of its laws, but in the very regime that drafts and implements these laws.

The forthcoming AL meeting in Tunisia on February 24 should capitalize on the powerful message sent by the 137 nations at the UNGA condemning the Syrian security forces’ onslaught on its people while providing moral support that goes beyond polemics and opens the door for real action on the ground. The members of the moderate camp should implement such bold measures as the establishment of a “Freedom Corridor” by carving out a portion of Syrian territory in the north bordering Turkey. As in Libya, a no-fly zone air-patrolled by willing NATO and AL member states should be established immediately over this corridor, but without engaging in combat with the government forces, except in defense of the corridor.

This corridor would provide a humanitarian safe haven for civilian refugees escaping the violence and would receive military defectors while serving as a base for arming the Syrian Free Army as Senators John McCain and Lindsey Graham, both of whom serve on the Senate Armed Services Committee, have recently advocated. Moreover, the corridor will allow the Syrian National Council (SNC) to place a foot on Syrian ground, thereby paving the way for its recognition by the AL, Western and other Muslim powers. In addition, the SNC should establish a shadow government composed of non-ideological professionals and technocrats to begin planning for a post-Assad era. NATO members, particularly France (which already advanced the idea of a humanitarian air corridor last November) as well as the AL are likely to support such a proposal.

Israel can quietly contribute by opening and monitoring closely its Syrian border for refugees from southern Syria for whom the advocated northern safety zone is beyond their reach. This Israeli action can be done in coordination with Jordan, which shares borders with both Syria and Israel. But the largest responsibility lies with Turkey with the full support of the Arab League.

Of all the moderate camp members, Turkey is the largest stakeholder in Syria. Short of an intervention by the international community, the current conflict in Syria will soon turn into a full-scale civil war that will flood Turkey with refugees, empower the PKK base in northern Syria, and secure an enlarged Iranian influence on its immediate proximity, all to Turkey’s disadvantage. At the same time, Turkey is best located geographically and politically to allow and support the establishment of this corridor along its southeastern border. A Turkey that takes the initiative would not only demonstrate true leadership in the Middle East and further strengthen its alliance with the West, but it would also bridge its relations with an Arab world that has become increasingly worried about a neo-Ottoman foreign policy in the region. For Ankara, it is time to reconcile with the bitter reality that there is no middle ground: either stop Iran in Syria and end the killing fields or surrender Syria to Iranian domain, thereby further encouraging Iran to pursue its ambition of becoming the region’s hegemon potentially equipped with nuclear capabilities.

For all intents and purposes, Syria has turned into the battleground between the forces of moderation and the forces of extremism in the Middle East. Feeble attempts by the international community will lead nowhere as long as they ignore the realities of the Baathist regime in Syria. At the same time, any prospect of reaching some kind of an arrangement agreed upon by Assad that is meant to empower the Syrian people is an illusion. Removing Syria from Iran’s grasp, however, while freeing the Syrian people from Assad’s shackles will have dramatic geopolitical implications as it will also change the power equation throughout the Middle East. To be sure, decoupling Syria from Iran’s hold would further underline the regional and international isolation of Tehran and might avert military action against Iran by either Israel or the U.S., the aim of which would be to end its nuclear ambitions.

The victory of Iran & Co. in Syria would be catastrophic for the region and should be stopped given the opportunity currently available. By ensuring a regime change supportive of the Syrian people’s yearning for freedom, the Shiite Crescent would be broken and place insurmountable pressure on Iran to end its meddling within the affairs of its Arab neighbors.