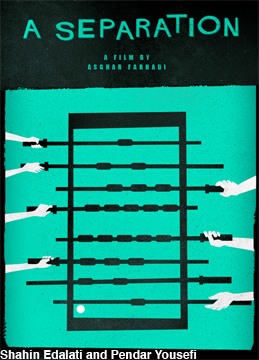 The Oscar nomination of “A Separation” for best foreign-language film and best original screenplay, has drawn much attention to Asghar Farhadi as a writer and director. As The Hollywood Reporter wrote: “Just when it seemed impossible for Iranian filmmakers to express themselves meaningfully outside the bounds of censorship, Asghar Farhadi’s Nader and Simin, A Separation, comes along to prove the contrary.”

Why has this film drawn so much attention? Many Iranian and international film critics have pointed out that this film in particular and Farhadi’s films in general are preoccupied with ethical quandaries and the search for truth. Other critics have singled out Farhadi’s ability to present complex characters and the complexity of human relationships in general. No character is portrayed as entirely heroic or entirely evil.

What are some of the key themes that Farhadi has singled out in “A Separation”?

At a question and answer session following the screening of this film at the 2011 Berlin Film Festival, Farhadi stated the following: “…I think the end of a movie should not be an end but a beginning for finding answers to the questions which have been raised in the course of the film. . . When writing the screenplay for A Separation, I was constantly going to divorce courts to observe the proceedings. We live in a country with a high divorce rate, even though it seems that Iran is a country in which people are very traditional and divorce is not a traditional but a modern phenomenon. The reason for this contradiction is the fast pace with which the country is moving toward modernization. . . There is also a hidden feud in the country. . . There is a hidden war between social classes: A war between the class of the dispossessed and traditional, and a class which wants to live according to the rules of the new world…”

At a press conference following the first screening of the film in Tehran, Farhadi stated: “This film is in a way the expansion and coming together of the contents and themes of my three previous films. However, this coming together was not in any way determined or planned. When I finished writing the story for this film, I felt that this film and this story could be the culmination of part of my filmmaking career. . . ”

If by “my three previous films” Farhadi means the films for which he was both writer and director, he would be referring to About Elly(2009), Fireworks Wednesday (2006) and Beautiful City (2004). Hence, in the remainder of this article, I would like to take up how Farhadi presents some of the above mentioned themes in these films.

Farhadi’s sensitivity to the man-woman relationship, can be seen from the very first scene of A Separation which opens in a divorce court. Simin, (Leila Hatami), who has obtained a visa for the family to emigrate, wants a divorce because her husband is not willing to emigrate. Nader(Peyman Moadi), wishes to stay in Iran to take care of his elderly father(Ali-Asghar Shahbazi) who has Alzheimer’s. Simin will not leave without her daughter, Termeh (Sarina Farhadi). By law, however, Nader has custody of their daughter who in this case also desires to stay with her father. The judge refuses to issue a divorce and encourages the couple to resolve their problems.

As the film proceeds, and Simin moves back to her parents’ home, we become aware of the fact that Simin has been the main caretaker for Nader’s father up to now.* We also realize that the conflict between Nader, a bank employee and Simin, an English teacher, is not limited to the conflict between a desire to emigrate and the obligation to care for one’s elderly father. Nader is capable of displaying behavior that can be characterized as stingy, abusive, mendacious, insensitive and unreasonable.

The issue of class inequality and its complex relationship with gender is depicted in the predicament of Razieh(Sareh Bayat), a pregnant working class woman who is hired by Nader as a housekeeper and caretaker for his father. Razieh who has hidden her new employment from her husband, has to travel with her small daughter for over two hours each way on bus to get to Nader’s house and work from early morning to the late afternoon. In exchange Razieh will receive $300 per month which is barely over the official minimum wage in Iran.

Razieh is married to an unemployed cobbler, Hojjat(Shahab Hosseini), and has to face frequent visits from her husband’s creditors and authorities who take him to prison for not having paid his debts. Without advanced skills or any funds, and with a small child and another one on the way, she has no option but to stay in this marriage.

In Fireworks Wednesday, the themes of gender and class are presented by focusing on one day in the life of an upper class couple in Tehran. The couple are constantly fighting because the wife, Mojedeh (Hedieh Tehrani) suspects that her husband (Hamid Farrokhnezhad) is having an affair with the next door neighbor(Pantea Bahram). Their fights are being viewed from the eyes of a young woman servant, Ruhangiz(Taraneh Alidoosti) who has been hired for the day from a temporary agency.

Without in any way belittling Mojdeh’s plight vis a vis her husband, Farhadi also reveals her insensitive attitude toward the servant, the wife of the building’s janitor, and a delivery man. Neverthess, the servant develops much sympathy for Mojdeh when she realizes how unhappy Mojdeh is in her marriage despite her financial comfort.

In About Elly, the man-woman relationship continues to remain central. Elly (Taraneh Alidoosti), a young preschool teacher, has been invited to join a few urban middle class couples, their children, and a young single male family friend (Shahab Hosseini) on a trip to the Caspian Sea. She is aware that the purpose of inviting her is to introduce her to this single man who is visiting from Germany and is looking for a wife.

All the interactions are friendly, warm and jovial until suddenly, Elly disappears. At that point each tries to blame the other for this unfortunate incident. However, the story becomes even more complicated when Elly’s mother is contacted, and it becomes known that Elly has a fiancé (Saber Abar) who will come to search for her.

Farhadi’s dialogues give voice not only to the views of those who rush to condemn Elly for being dishonest but also to the views of her friend, Sepideh (Golshifteh Farahani), the one person who has a great deal of sympathy for Elly and her possible motivations for hiding this trip from her fiancé. Although these motivations are not discussed, it is clear that for a preschool teacher who has to experience the daily hardships of gender oppression and poverty in Iran, the prospect of marrying a man who would take her to Germany is very seductive. Farhadi’s portrayal of Elly’s fiancé is also sensitive and leads the viewer to believe that he was in love with her.

Given his powerful portrayal of the above themes, I was surprised by part of Farhadi’s statement at last year’s Berlin Film Festival, in which he characterized Iran’s “war between social classes” as “a war between the class of the dispossessed and traditional, and a class which wants to live according to the rules of the new world…” This statement does not address the fact that an increasing portion of the urban poor and the working class in Iran is now literate and welcomes many aspects of modernity.

In fact, Farhadi’s film, Beautiful City portrays a young working class woman and shanty town dweller, Firoozeh (Taraneh Alidoosti) who lives with a man from whom she has had a child. In the course of the film, she falls in love with her brother’s former prison mate, A’la (Babak Ansari). Some of the scenes, follow these two characters as they travel around town and spend time together in their effort to free Firoozeh’s brother from a death sentence. Such a portrayal breaks with conventional views of traditional working class women shanty town dwellers.

Today, in Iran, the existence of a mostly literate urban poor and working class population, along with a young student population—women and men, many from working class families—who have been exposed to modern ideas in universities, remains a key threat to the Iranian regime.

Watching Farhadi’s films and pondering the intricacies of the rich dialogues which he has created, can lead to fascinating discussions on the critical issues that are animating Iranian society.

* In his review of A Separation, Dan Geist, makes the following observation: “Any hint of callousness on her [Simin’s] part is offset by the fact that of the few words the old man can still utter, the one he speaks most often is ‘Simin.’ Judging by the way he enunciates the name, the care she has provided has surely been tender; unquestionably, and more relevant to the events of the tale, it has been tireless and precise. A Separation commences on the day the unerring execution of that care ends.” See “‘A Separation’: At Sea in the City of Ten Million Tears” in Tehran Bureau. October 5, 2011.

Fan poster (above) is by Shahin Edalati and Pendar Yousefi. See more here.