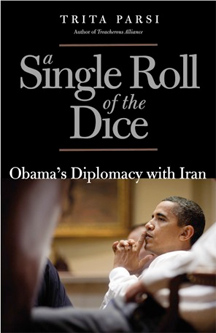 Last time I checked the Amazon reader reviews on Trita Parsi’s A Single Roll of the Dice, nine readers had praised it with 5 stars and six had panned it with one star. There were no in-betweens. Lay critics saw the book either as “mandatory reading,” or “not worth your Dollar.” Scaled up to bestseller proportions, the book seemed to be a scholarly version of The Satanic Verses! Yet no sparks fly out of the book; there are no accusations, bold claims, astonishing revelations or intrepid predictions.

I was disappointed to find the book a straightforward academic work albeit on an important subject: what went wrong with President Obama’s idea of engaging in diplomacy with Iran? The author simply lays out his thesis that opposition from the President’s own cabinet, Israel, Iran, Saudi Arabia and Congress, compromised his vision of diplomacy with Iran. Then he goes on to show the rigorous research he’s done that supports his claim. So why is there a drama being played outside the pages of the book by both lay and professional reviewers? This may be the result of tensions over a possible U.S.- Iran war where even a modicum of fresh opinion can upset the pre-war propaganda ecology.

On the anti-diplomacy side Sohrab Ahmari writes in the Wall Street Journal, “Beneath the book’s slick presentation, though, political animus simmers. Mr. Parsi accuses a remarkable number of countries, organizations and individuals—including Sunni-Arab states, the European Union, the U.S. Congress and even members of the Obama administration—of having deliberately undermined the president.” From this it can be gathered that in Mr. Ahmari’s preferred narrative the President’s vision of diplomacy with Iran had no opponents and even if it did these opponents stifled their motives and interests, perhaps out of respect for Mr. Obama’s leadership. This is an idyllic scenario of American politics that delivers a simple message easily understood by the public: the President reached out a hand of friendship towards Iran but Iran rejected it. This narrative makes it easier to go to war with Iran.

On the opposite side from Sohrab Ahmari are Flynt and Hillary Mann Leverret, influential Iran analysts who advocate a rapprochement between the U.S. and Ahmadinejad conservatives. In their Boston Review critique of the book they characterize Trita Parsi’s views as “neo-conservatism without guns.” The Leveretts maintain that Trita Parsi’s insistence that U.S.-Iran negotiations should include a human rights agenda paves the way for war with Iran. “In a war-fevered environment a book such as Parsi’s makes a difference,” they say, recognizing that it’s not so much what the book says but when it’s saying it. They see a threat in Single Roll raising doubts about their simple story where the Iranian regime is a legitimate and permanent entity with whom the U.S. has no choice but to come to terms if she is to respect her own national interests.

So on the one side we have war advocates attacking the book because the minimalism of their populist message is threatened by the political complexity described in Parsi’s writing, and on the other side we have anti-war advocates attempting to discredit the information and analysis contained in the book out of concern that it could muddy the anti-war narrative, making it less convincing in elite policy circles. To rhetorically undermine Parsi’s discourse, the Leveretts label the book as “an agenda driven analysis” and Ahmari says, “Mr. Parsi is far from disinterested in the ultimate outcome of the engagement debate.”

So does A Single Roll of the Dice go beyond an exposition of the author’s research valuable to policy making to actually promote a specific course of action? Like other reviewers I too am tempted to attribute a purpose to the writing. What Single Roll seems to advocate is this: the U.S. should not go to war with Iran, but should rather pursue a multi-issue line of negotiation — alongside the nuclear agenda — that encourages the aspirations of Iranians seeking more freedom. The Leveretts view this as an implicit call to U.S. interference in domestic Iranian affairs, possibly signaling an intent to overthrow the regime by force. This is why they assault Parsi’s analysis. The neo-conservatives (correctly in my opinion) view it as a path to a strong and friendly Iran that can become a rival to Israel as a reliable U.S. ally in the Middle East. They malign the book because this policy could bring about an ebbing of Israeli influence in the Middle East.

However, regardless of any motives on the author’s part, the book’s call for including the human rights topic in negotiations with Iran is sound policy thinking. Parsi prominently cites the tunnel vision focus on the single nuclear issue as one of the reasons for the failure of diplomacy with Iran. This is because the Iranian protest movement, which started after Obama’s outreach, has radically altered the U.S.-Iran dynamics, needing completely new policy drafts. Any approach recommended prior to June 13 2009, the day of the first Iranian election protest, is obsolete. A Single Roll of the Dice understands and fully appreciates the significance of Iran’s domestic opposition. The book’s shortcoming is that its scope does not cover specific guidance in building negotiation strategies around this new reality. I was going to give it 3 stars on Amazon, but will add a fourth “bias” star because I have hopes for the Iranian opposition.