A mûrtad, and proud of it 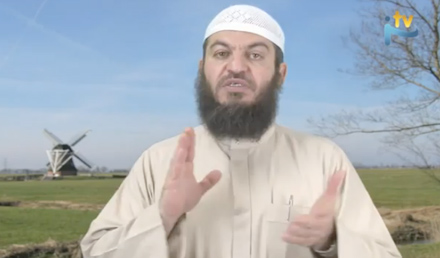 Last week the director of Amsterdam’s platform for political discussions De Balie invited me to comment on the debate between Imam Al-Haddad, parliamentarian Tofik Dibi and the journalist Kustaw Bessems about the position of Islam in the West. This is an extended version of my remark on Al-Haddad during this debate.

First of all let me thank you for being here.

There are a lot of people who consider you as a charlatan. I, however, think you are a brave man too for being here tonight. You are an example for many men with beards and women with headscarves sitting here in the audience while slobber run out of their mouths as they watch you, smoothly moving in your Jelaba. To those Dutch Taliban warriors, European Jihadists and Al-Shabaab combatants whose ideas do not differ much from yours, especially you are an example. But let me put this straight, most of the Dutch citizens, including me, despise those ideas strongly.

In your messages, you urge everyone to ‘read the Quran with an open mind’. I read your Holy Book and became – let me for the sake of good understanding say it in your religious language – a mûrtad; someone who rejects (the Islam). Ironically, I have much more in common with your beloved prophet Mohammad than you think. Not only he, but also the Christian prophet Jesus were both mûrtads. One refused to believe in Judaism and therefore start spreading his new message, later known as Christianity. The other, your Mohammed, was born and bred in the powerful Quraysh tribe and disbelieved the religion of his own family who had designed and worshiped the 360 godly icons in Ka’aba for generations. Yes indeed, Mohammad, for the apostate he was, destroyed the icons and introduced the religion you are worshiping now.

Mr Al-Haddad, there are three reasons which make me your enemy: I am an Iranian, not an Arab; I am born and raised as a Shia Muslim and therefore not a true Sunni Muslim as you and your Jihadist followers call yourself, and finally I am a Muslim-born who is an atheist now. A mûrtad. Three reasons for Allah to kill me and his followers to fulfil his wish.

In a sermon you gave at the al-Muntada al-Islami mosque in London – not in Mekka, Cairo or Tehran – but in the secular capital of the United Kingdom, where the unbelievers are in charge and the laws of Allah do not rule, well at least not yet, you emphasized that “capital punishment in Islamic Law is permissible for those who leave their religion”. What can I say? According to the holy book you’re right. In fact, you are just one of those consistent believers of the source of your ideas, the Quran, which has underlined the Islamic thought about mûrtads in several verses, for example this Aya in chapter four:

“They wish you would disbelieve as they disbelieved so you would be alike. So do not take from among them allies until they emigrate for the cause of Allah. But if they turn away, then seize them and kill them wherever you find them and take not from among them any ally or helper.” [4:89]

I have to admit. This verse doesn’t quantify the style of ‘seizing and killing’ and that is the reason why the four Sharia Schools have not reached a consensus about the way in which mûrtads should be murdered: some execute the words of Allah by cutting the head using a sword, others implement the verse by burning the apostate and some carry out the punishment by hanging, which you seem to prefer. A thing you got in common with the Shia regime of Iran, as they love to hang their apostates and other sinners.

Like you, I am aware of the fact that these holy words about apostasy, godly regulations and executions are frightening. Especially for those Muslim-borns who dare to consider any doubts or even try to think without boundaries. A huge number of them call themselves Modern Muslims who try to integrate in the society and participate in the public opinion, like our debate now. But even for them you have whetted your scythe.

Though, they must be killed too. This time not because they call themselves mûrtads, but because they are the ones, according to Quran [4:89], who ‘turn away’ and in your view become ‘creative writers’ that ‘compose heretical writings’. After all you cannot ‘tolerate esoteric interpretations’ than the Quran itself.

Let’s be clear about one thing. I am not trying to put words in your mouth, as you accused Tofik Dibi for doing so. Therefore I will quote your entire expression, so we’ll have no miscommunication afterwards. In that same sermon in London you preached that “the stories of those who compose heretical writings, that you cannot tolerate esoteric interpretation, you rule on their apostasy and desertion of the religion. In the West they are known as creative writers, and are considered as amongst the most innocent, but to us they are apostates, and their blood is halal.”

Let me repeat that: “their blood is halal.” In other words, it is permitted (halal) to shed their blood.

So, not just the self-called mûrtads like me, but also the Modern Muslims must be terrified by these words; cause it is easy to halalizetheir blood as well. The tragedy about this is that these Muslims trivialize your words and influences, with irrelevancy. They argue that you are just a small part of the Muslim minority and that their ‘interpretations’ must be seen as the ruling majority in The West. Quite doltishly they forget that their modernized interpretations can be ritually slaughtered by people like you.

After all, your dark regulations are the closest to the literal text of the Quran, which automatically brings them in disadvantage. Unfortunately, these Modern Muslims are not aware of the fact that the light of freedom can only defeat darkness and remain shining if they listen to these wise words of the ancient Chinese strategist SunTzu: ‘fight on your own terms or fight not at all’. And in this case the winning terms are not their moderate interpretations, but human rights, the rule of law and secularism in the framework of liberal democracy.

I just noticed that with this comment I have given you a fourth reason to lynch me. Because I am not only a mûrtad, an Iranian and born Shia but I also belong to the category of the “creative writers” who’s “blood is halal”. To be sure about this, let me now ask you my question: What do you think about me?

In his answer to my comment and question Mr Al-Haddad confirmed that in a country where Sharia rules, I would be killed for sure. His message to Dutch peopple here.

AUTHOR
Damon Golriz (1981) was born in Iran and lives in The Netherlands since 1995 as a political refuge. He is a political commentator.