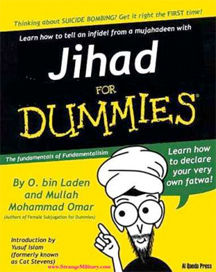 Yes, it’s Jahad, not Jihad. And it’s Moslem, not Muslim (mis-pronounced as Moose-lim). It’s also Eslam not Islam. The corrections I just made are how the words are pronounced in Arabic.

You need to know what it is and how it is pronounced properly, if you want to comment on it. It deserves that respect at least.

That out of the way, onto Jahad and why I’m against it.

Is there really anything that bad on this, god’s earth that is so bad that it needs an all out Jahad to fix?

According to the BBC, which I know is not the best moral case for defining Jahad, but it is pretty close, Jahad means one or all of the following 3:

“A believer’s internal struggle to live out the Muslim faith as well as possible.

The struggle to build a good Muslim society

Holy war: the struggle to defend Islam, with force if necessary”

Based on these 3 being one or all of the meanings of Jahad, I’m not convinced, and still against it.

A believer’s internal struggle to live out the Muslim faith as well as possible.

Now if resisting the temptations of the pork, and the wine, and the un-hejabed golden flesh of Christians is that hard to resist, it isn’t Elsam’s fault my friend. It’s you and your lust for gluttony, greed, and your innate yet natural desires to sleep with many LARGE foreign women.

But don’t blame any of that on Eslam.

“The struggle to build a good Muslim society”

Exactly what is a Good Moslem society? and why would one be such a “Struggle” so as to need an all out Jahad to build one. A Moslem society by it’s very nature will be good, so building a good one should not hurt a bit, but defining one as Good, only supposes that there are bad ones too.

And that’s too confusing for me. So Ixnay on the hajad-day.

Which brings us blessedly to:

“Holy war: the struggle to defend Islam, with force if necessary”

Again, an obsolete step, given that seriously no one really wants to outright destroy Eslam. I mean if they don’t destroy Mormonism, do you think anyone cares bout Eslam? Really?

In fact one could argue that it is ironically only when Eslam suggests Holy War, that there is the slightest and I mean slightest inkling by anyone for a split second, to want to destroy Eslam.

I’m talking maybe one seriously wacko Israeli orthodox militant settlement guy, who inadvisedly sunk his life savings and moved his nice wife out of a nice apartment in Tel Aviv and quit a nice computer programming job after he got out of the mandatory army, where he patrolled Jerusalem, and invested it all into a really bad design half-done concrete duplex with the rebar still showing off the unfinished balcony, now realizing he has been left behind in the occupied territories that Israel is now giving right back to the Palestinians. Albeit grudgingly.

OK, maybe that dude would want to destroy Eslam. But everyone knows, he’s an asshole.

To wind up this episode of “How to kill the last half hour in a work day” though, I hope I have sufficiently argued (peacefully) that Jahad is ultimately pointless and totally unnecessary.

Except for maybe one last one, how about a nice Jahad on all future Jahads?