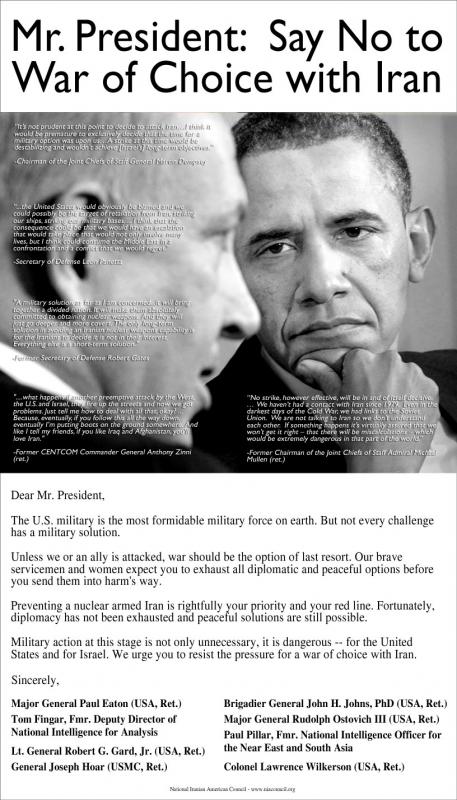 Today NIAC spent what is hopefully left of it’s budget on a full page ad in the Washington Post calling for president Obama to hold off on attacking Iran first.

The ad says, “Unless we or an ally is attacked, war should be the option of last resort.”

Or, please wait until Iran attacks the US or Israel before you blow them into the next century. Which is a perfectly good argument, if 911 or Pearl Harbor (ranked by total number killed) had not happened. Unfortunately what NIAC in spite of the amount of time it spends on Capitol Hill still doesn’t seem to get, is that the US is not in a position to risk this again, and thus the war drum beating is getting louder. Naturally.

To be absolutely fair about all this, the likelihood of Iran attacking the US first is far lower than even the Fordow nuclear storage facility. And Israel is safe too.

Because everyone knows that the only reason that Iran wants a nuke is; because Pakestan has one, and it also happens to be a very good way to protect the sovereignty of the Islamic Republic. So they can keep the fun times going.

The irony is that the reason Iran feels it’s sovereignty threatened by the US and Israel, is precisely because of the Islamic Republic’s policies. Supporting nefarious activities around the world, let’s name them; Hamas, Hezbollah, Lebanon, Syria, Bahrain, Argentina and now Thailand. These are facts about Iran that even NIAC cannot deny, because Iran never denies them, but of course you will never see this mentioned in a NIAC ad.

That the source of ALL of Iran’s problems, are Iran.

It is important for everyone to know that it is these actions by Iran, and now add to it the desire to get a nuke with which to protect these actions, that have put Iran square and center, at the very top of “Countries I should Invade Next” wish list of the President of the United States.

Blame everyone else if you want, but know in your heart that it will always come back to Iran and her shitty life choices. I mean if you know the dog has bitten many times before, has just finished biting, and is in the process of biting right now, why on earth would you put your fucking hand in the cage?

This is Iran’s very dangerous game of a lazy fat Persian Cat vs a very lean and mean American Yard dog. One guess who will end up in whose mouth.

NIAC’s ad further says that, “Fortunately, diplomacy has not been exhausted, and peaceful solutions are still possible.” which is completely and utterly true. Because that statement is painfully obvious.

Diplomacy: noun, (modified) def: the art and practice of conducting negotiations between nations, especially after a war.

Unfortunately and apparently as usual, and like always, NIAC suggests a super secret better way exists, but has absolutely no idea of what that might be. Because if they did, you’d think someone on NIAC staff would get the clue that maybe, just maybe, that information would be worth sending to the guy who knows PhotoShop in the office, and can put that in the full page ad in the Washington Post on a cold Monday morning.

Finally, all you need to know about NIAC is in the black and white ad. Discount Lobbying and Bargain Diplomacy for half the price of color.