All You Need to Know About Iran 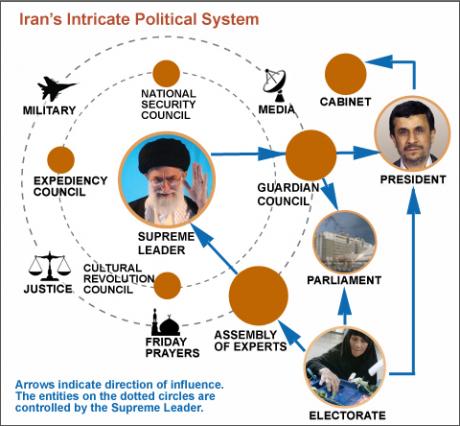 Blatantly copied from the VOA.

Iran’s system of government, known as the Islamic Republic, is an autocratic council/committee based system, in which councils and committees made up of religious elders, overseen by a council chosen by the Supreme Leader, give advice, counsel, and overall direction to the traditional branches of government and various government functions.

The graphic is explained in greater detail below.

* Proposes, passes legislation for approval by Guardian Council
* Consists of 290 members; membership to be increased to 310 for March 2012 election
* Main coalitions include conservatives and reformists
* May choose to impeach president
* Approves/fires Cabinet ministers through confidence votes
* Approves 6 out of 12 guardian council members recommended by Supreme Leader
* Approves budget submitted by president

* Comprises 86 Islamic scholars elected by the public, screened for piety by Guardian Council
* Selects Supreme Leader
* Members serve 8-year terms; meet once every six months to review Supreme Leader’s activities
* In theory, can remove Supreme Leader in cases of incapacitation or corruption, though this is very unlikely

* Presidential candidates are vetted through councils, but ultimately the Supreme Leader will choose the final two candidates
* Performs administrative role, rather than executive role as in other countries
* Selects cabinet members, implements policies set by Supreme Leader and laws approved by parliament
* Serves 4-year term, limited to two consecutive terms
* If re-elected, can run for a third term after sitting one out
* Proposes budget