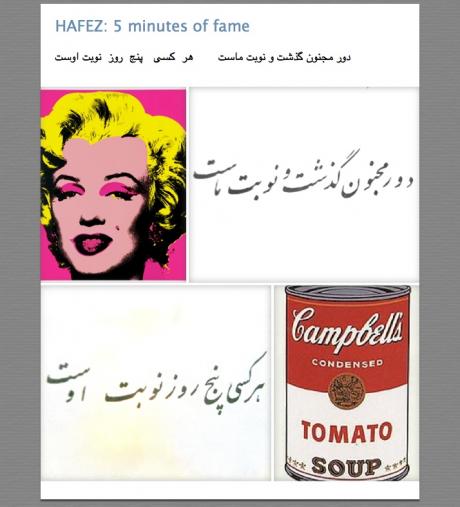 HAFEZ Blog is back.

My conscience had me leave for several months after the site was posting views openly insulting the entire religion of Islam on its front pages. I needed a break. After much encouragement, and enough “time out”, I’ve decided to  change my Logo picture to an aerial view of Cyrus’s Tomb – as a reminder to all of us of Cyrus creating the first Global Empire some 2500 years ago, on the pillars of Freedom of Worship, and respect for all religions. (photo courtesy of Swiss Photographer Georg Gerster – RIP)

HAFEZ: 5 “minutes” of Fame: Today’s Blog was inspired by a fascinating moment I had recently. Hafez often jolts you with statements that resonate with a  deliciously contemporary parallel. Of course there are great differences between Hafez’ Beyt (couplet) and his 5 Days  and Warhol’s famous statement:”In the future, everybody will be world famous for 15 minutes” – where 15 minutes of fame was coined.

For each of us  5 days  are set to uphold

In the above, Hafez is emphasizing how “love” takes its turn and each of us will have our share, our “5 days”, of it. That Majnoun (of the Love epic “Layla and Majnoon” fame), that Majnoon’s time is up, and it’s our turn. Hafez often tells you to daryab, to behold, your moments of connection, and the concept of 5 days here is a reminder that such connectivity is often passing.  The rest of the poem has Hafez singing the praises of his Beloved. With Andy Warhol – his quote also recognizes that perhaps we are all destined to have our own “15 minutes” — The quote was from a 1968  Exhibit of his in Stockholm, Sweden. To me, it’s always sounded like a finger of sorts to the notoin of “fame” – as if he’s saying: “Stop idolizing me. The future will make fame redundant.” In many ways, reality TV has – where anyone can be “famous.” Or perhaps, he was less jaded than our reality tv era, and he’d simply meant: “We all can create, there’s an artist in all of us. By definition, we are all due our 15 minutes worth of fame.”

What the two quote share is the sense that something can happen to “anyone.” In Hafez’s case, it is love, and spiritual connection with a Beloved  that can happen to Har Kassi, to anyone. For Warhol, living in an age of false adulation, it’s possibly false adulation that could happen to “anyone.” Or the lest malign interpretation, it is the reality that we are all potential creators, and therefore will one day become famous for it.

Feel free to share what you see in the comparison.