Mehdi Khazali vs. The Nukes 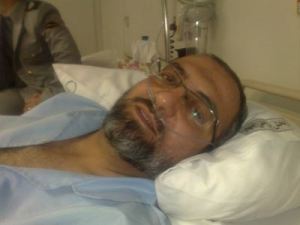 When it comes to Iran, there is no shortage of political prisoners.

You hardly need to search before you come across yet another heart-breaking story about a mother, a brother or a friend harassed, tortured or kidnapped by the Iranian Regime’s Revolutionary Guard.

These truths have become so common, that perhaps many have become numb and de-sensitized.

And for this reason, it’s crucial that we take a minute of our day to think about Mehdi Khazali.

Khazali is an outspoken member of the opposition, a vocal critique of the Regime. Khazali is also the son of a well-respected ultra-conservative Cleric.

But the Regime spares no one in its frivolous accusations of “disturbing public opinion” or “propaganda against the state,” and has proven its commitment to silence and Islamic Conformity.

Khazali is currently being held at Tehran’s notorious Evin Prison.

In a world where most of us couldn’t consider going to bed without a warm meal, the reality of Khazali’s situation speaks volumes.

In circumstances so grave and so unjust, the excruciating battle of a hunger strike is preferable to an endless unmerited prison sentence based in the Regime’s fears of free-thinkers.

The Regime is branding the country as a place where political prisoners are starving themselves in the minimal chance they might see justice, but where the Regime’s nuclear program still forges its path relatively untouched.

This is how know what the Regime’s priority, and policy, is.

But will we continue to think that the rise in persecution and human rights abuses isn’t directly correlated to the advancement of Iran’s nuclear program? Or will we finally admit that the closer the Regime comes to manufacturing a nuclear bomb, the harsher the Regime will treat Iran’s people?

Take a stand for #Khazali now – keep his story trending on #Twitter!