Netanyahu’s poor choice of a gift to Obama 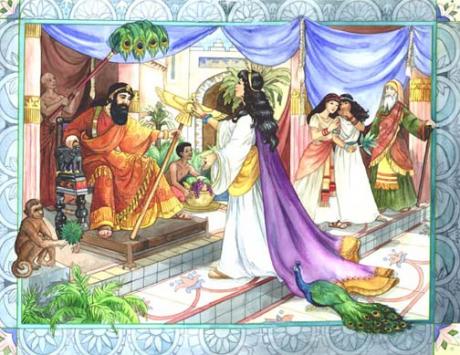 Obama can’t help receiving books from presidents. Venezuelan President Hugo Chavez delivered a book entitled Open Veins of Latin America: Five Centuries of the Pillage of a Continent soon after the US President took office drawing a close to the Bush era and renewing hopes of a new dawn in American politics. Obama soon became everyone’s man, each world leader, including Ahmadinejad trying to make an impression on him and trying to steer the new political leader in the White House into a new political direction. Let’s educate the new President.  Benjamin Netanyahu arrival to the Washington DC to attend the annual AIPAC Conference and to squeeze out more grants and money to stave off an attack on the IR also gave Obama a book. The book of choice was the book of Esther. It doesn’t take a rocket scientist to guess the political symbolism of such a book. Beyond the fact that many Jews will celebrate the festival of Puriom this week (stranegly enough it is the only book of the Old Testament which doesn’t invoke God and isntead gives all credit to Esther who saved millions of Jews from the evil plan of Haman to anhiliate their people), Netayahu wants to draw parallels between the plights of the Jews thee thousand years ago and the ‘existential’ threat to the land of Israel.

To quote Netanyahu, Purim was a victory against an “anti-semite” Persian. However, there was no reference in his speach to a great philo-semite Cyrus the Great who saved a million Jews from Babylon and returned them to Jeruslamen to rebuild the Temple of Solomon. The fact that Netanyahu actually believes that the current Islamic Regime is even remotely Persian is insulting to Iranians. In reality the ancient Jewish people have a lot to be thankful of Persians and Cyrus was even named as the ‘annointed’ in the Book of Ezra. Even during the WW2, another ‘Persian’ Abol-Hossein Sardari had helped over 2,000 Jews flee the Holocaust in occupied France. Sardar’s efforts were acknowledged by the Simon Wiesenthal Centre in Los Angeles but apparently not by Mr Netanyahu.  Netanyahu despite his immeasurable arrogance is an educated man and knows very well that the Islamic Republic is an anti-Iranian regime having sent its bulldozers to flatten the ancient Persian Palace of Persepolis to the banning of the Chaharshanbe Souri bonfire and light celebrations which take place on the last Tuesday night before the start of the Persian New Year.

The shared history and civilisation between Persia and Jews before Islam is to be venerated  and not belittled in Netanyahu’s regrettably ignorant statement to score political points. Two years ago Netanyahu had praised the courage of the Iranian demonstrators who defied the batons and bullets of the Islamic Republic’s cruel riot police and Basiji militia men. His constant reference to Iran and not the Islamic Republic does not sit well with President Shimon Peres’s statement that Israel has no qualms with the Iranian people, only with the regime. It also insults the hundreds of thousands of Jews both in Iran and citizens of Israel who are of Persian descent. I do not for a moment expect Netanyahu to be a liberate us  like Cyrus the Great – he does not have the willingness and he is not the prime minister of Iranian but that remark was below the belt.

His disparaging remark about “anti-semite Persian” might alientate many Iranians who stand in solidarity with the State of Israel in fighting our common enemy against the Islamic Republic even if the majority of Iranians do not support military action.

Of course, Netanyahu was absolutely right to highlight the IR’s stoning of women and hanging of gays and its sponsorship of international terrorism . He is also correct to state that the patience of the world has been exhausted by the IR but the number one victim of the IR’s atrocities are Iranians themselves. I can fully understand the anger and resentment agains the Islamic Republic which funds Palestinian and Lebanese terrorists in its proxy war against Israel but it does not justify Netanyahu’s callous remarks aimed at Persian history. Whilst Netanyahu’s speach is no worse than Hassan Nasrallah who said that there was no civilisation in Iran before Islam, he should release an apology and clarfify his statement.