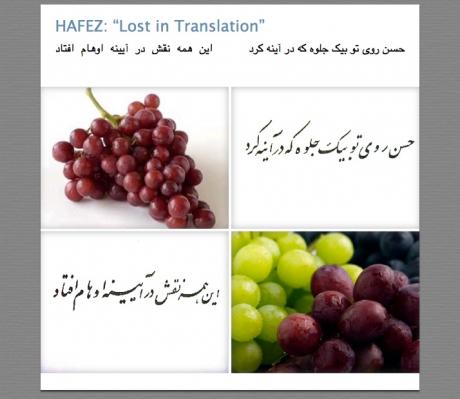 In much of classical Persian poetry and thought are echos of the idea that humanity is fighting over the same God! That a higher spiritual power has manifest itself to all of mankind in different places, but it’s been man that’s mistaken these different manifestations as tools to uphold as weapons against each other.

In Rumi/Molavi’s Massnavi there’s a tale about “Grapes”/Angour. 4 hungry and poverty stricken men were sitting along a wall, perhaps to keep cool in its shade. They were each from a different place: one was a Turk, one an Arab, one a Persian and the other a “Rumi”/from the Eastern Roman Empire. (Which incidentally, is why Rumi is named so – “Rumi” is the name for “Rome”- as he had emigrated to the Eastern Roman Empire where Turkey is today, to get away from the Mongols invading Khorassan, Iran.)

A passerby glances over at the 4 men and could tell that they were all hungry. He gives them a “deram”/a unit of money – so that they could all buy something to eat and relieve themselves from their acute hunger. It is at this point that the men start squabbling. The Persian wants “Angoor”, The Turk wants “Ozum”, The Arab wants “Anab”, and the Rumi wants “Estafil.” They bicker badly, with all their energy  consumed in this fight. Another passerby, this one a particularly learned man, comes across the commotion. He goes in and listens to all 4 sides – and being proficient in all 4 tongues, understands what the issue is. That they are all saying “Grape.” All 4 men are saying  they should buy grapes as they are nutritious and delicious. But they’re all saying it in their own different tongue and it’s all getting lost in translation.  He steps in, and assures them that if they give him the “deram” he’ll present them with a solution that will please them all! He goes off to a fruit stand and buys some grapes and returns. At first, each person gets boastful,assuming they had been favored over the other 3; only to then be humbled by the learned stranger into realizing there were no winners and that they’d infact been fighting over the same thing!

HAFEZ: The principles of this concept is echoed in the couplet/Beyt from Hafez today:

Your Beauty, your Goodness, with a single reflection in the mirror of the human heart

That one manifestation, a single epiphaney of the Goodness and Beauty of the Beloved, of God, has resulted in plans and designs capturing that same epiphany in a spectrum of ways. And these different designs are that which we are all fighting over. They are all the same nutritious “Grape” – having lost in translation our common desire for the same entity.

We hold Hafez classes in DC – come and join us, and I’m mostly posting this as further insight into the background of where these posts are coming from: YOUTUBE: “Learning from Hafez in DC”: