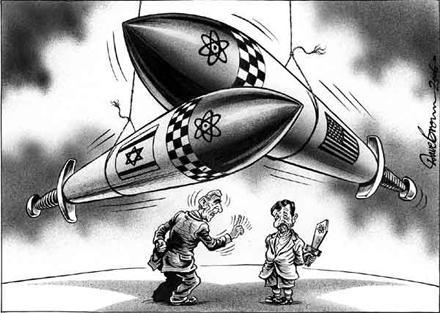 Undoubtedly, urgent action towards de-escalation is needed in order to avoid the outbreak of a military confrontation with Iran. What governs the present crisis is the presumed logic of collision in a conflict around nuclear monopoly versus deterrence. However, when adopting a long-term view, the two current antagonists could find their national interests satisfied in a zone free of nuclear weapons. Pointing to such a hopeful prospect might alleviate any deterministic pessimism looming over the conflict that conceives war as the only possible end-game.

More than before, the endless spectacle surrounding Iran’s nuclear program tends to escalate into war. While most security policy debates incessantly sway between the devil (war) and the deep blue sea (sanctions), it is clear that both options cannot eliminate concerns for nuclear proliferation and the well-being of civilian populations. The only sensible way forward would be to abandon such a policy choice that has proven counterproductive and, not surprisingly, has pushed the conflict to the brink of war. Instead, it would be best to focus efforts towards achieving regional disarmament and ultimately a nuclear weapons-free zone. Contrary to widespread assumptions, it can be argued that both Tel Aviv and Tehran have a long-term strategic interest in such a zone.

The only way forward is that of regional disarmament

For Israel, the danger would lie in the nuclearization of other important countries in the region (such as Egypt, Saudi Arabia and Turkey). Such a “balance of threats” would then have an unfavourable impact on its security and definitely curtail its military deterrence capability towards its neighbours. Since the “military solution” against the nuclear armament of a larger country – as can be observed in the case of Iran – is hardly considered a sustainable one by Israeli strategists, the only solution would consist in regional disarmament as a way to effectively provide for security.

For its part, Iran as a nuclear weapons state would dramatically lose its natural, geographically determined power position in Western Asia once nuclearization of its geopolitically weaker neighbours (especially those on the Arabian Peninsula) is triggered. Thus, in the medium to long term the possession of nuclear weapons would constitute a great disservice to the grand strategic interests of the country.

Therefore, it seems necessary to appeal to the long-term interests of both states. Far-sighted decision-makers on both sides should come to the conclusion that the future cannot rest on fragile short-term security calculations but in a zone free of nuclear weapons.

The above considerations are not meant to hide potential adversities. They are intended to stress the need not to search for solutions in alleged impasses of Realpolitik, all the while a possible resort in fact points to an opposite direction. Just as the German–French arch rivalry could unexpectedly be overcome, history shows us that the Iranian–Israeli rivalry is of geopolitical nature and as such it is by no means immune to a resolution.

The current situation in the region calls for alternative approaches in order to avoid a disastrous war with global ramifications. The spiral of armament and hostility can ultimately only lead into an abyss.

As a report by the EastWest Institute outlined in January 2012, it is high time for a regional security architecture in Western Asia. Both the U.S. and the EU should actively be engaged in assisting such a process, which would require nothing less than a paradigm shift. In order to lay a first foundation stone and at the same time send out de-escalating signals to Tel Aviv and Tehran, active political support from the West will be crucial to make the first UN Middle East WMD-Free Zone Conference a success. If the security dilemmas afflicting the region continue to be ignored, it will only be a matter of time before in Europe’s neighboring region the spectacle will flare up in an inferno.

An edited version of this article appeared as a guest column for Informed Comment on 1 March 2012.

AUTHOR
Ali Fathollah-Nejad is a political scientist educated in Germany, France and the Netherlands. He is currently a Ph.D. candidate in International Relations at the universities of London (School of Oriental and African Studies, SOAS) and Münster (Germany). In 2010, Fathollah-Nejad was a Visiting Lecturer in Development and Globalization (with a focus on the Middle East) at the University of Westminster in London. He is the author of The Iran Conflict and the Obama Administration (in German), published by Potsdam University Press in 2010 (reprinted in 2011). He is also a member of the working group on Security Policy of the civil-society initiative for a Conference for Security and Cooperation in the Middle East (CSCME).