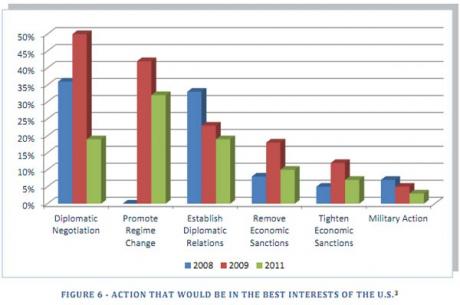 (The better informed everybody becomes the greater the chance that war can be prevented and propaganda can not distort reality. With a couple of clicks you can do your part by simply forwarding this to others.

(What stands out from the graph above is the drop in support for negotiations and the greater support for regime change which I attribute primarily to the “elections” of 2009.)

(Another noticeable result is the drop in support for military action but you would not think that was the case if you read the comments on Iranian.com which have a very vocal pro-war gang that bombards any item that hints of an antiwar stance. It’s good to know that these pro-war advocates on Iranian.com are less than 3%. I would not be surprised if these comments were being posted from Israel.)

Obama Needs to Go the Whole Mile on Iran Diplomacy

(As always Glenn Greenwald does a great job here.)

“One can reasonably debate whether MEK actually belongs on the list of Terrorist organizations. But as a criminal matter, that debate is irrelevant.”

“We have the most well-connected national security and military officials in Washington doing far more than all of that right out in the open — they’re receiving large payments from a Terrorist group, meeting with its leaders, attending their meetings, and then advocating for them in very public forums; Howard Dean, after getting paid by the group, actually called for MEK’s leader to be recognized as the legitimate President of Iran – and so far none have been prosecuted or even indicted. The Treasury Department investigation must at least scare them.”

“Even for official Washington, where elite crimes are tolerated as a matter of course, this level of what appears to be overt criminality — taking large amounts of money from a designated Terrorist group, appearing before its meetings, meeting with its leaders, then advocating on its behalf — is too much to completely overlook. The Washington Times reported on Friday that the Treasury Department’s counter-Terrorism division is investigating…”

(Time to lawyer up folks. I can just see Louis Freeh saying, “I am not a crook”. For a former FBI director to say that will be fun to watch.)

Enough doom and gloom here is a joke:

A blonde was driving home after work, and got caught in a really bad hailstorm. Her car was covered with dents, so the next day she took it to a repair shop. The shop owner saw that she was a blonde, so he decided to have some fun. He told her just to go home and blow into the tail pipe really hard, and all the dents would pop out.

So, the blonde went home, got down on her hands and knees and started blowing into her car’s tailpipe. Nothing happened. She blew a little harder, and still nothing happened.

Her roommate, another blonde, came home and said, “What are you doing?”

The first blonde told her how the repairman had instructed her to blow into the tailpipe in order to get all the dents to pop out. Her roommate rolled her eyes and said…

“HELLLLO… You need to roll up the windows”

PrevPreviousشازده مریم توده ای و خمینی
NextIf Syrians can do this, why can’t Iranians do the same?Next