Bibi Could Be Bluffing 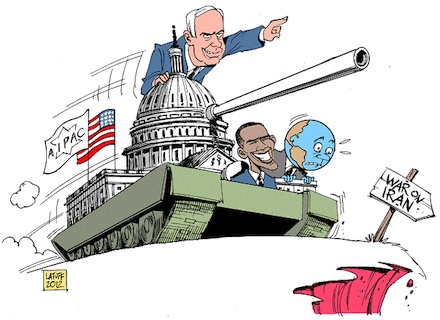 Whenever I’m in the Middle East, I find myself, sometimes within hours of arrival, more susceptible to the appeal of elaborate conspiracy theories.

I’m talking about the belief, advanced to me by a former senior Israeli military official, and echoed by other non-insane people, that Israeli Prime Minister Benjamin Netanyahu is bluffing: He has never had any intention of launching air and missile strikes against Iran’s nuclear program, and is working behind the scenes with Obama to stop Iran through sanctions.

In this interpretation, what Netanyahu has been doing — for the past 15 years, in and out of office — is creating conditions in which U.S., Western and Arab leaders believe that they must deny Iran its dream of nuclear weapons or else suffer the chaotic fallout of a precipitous, paranoia-driven Israeli attack.
An Attractive Theory

The theory has its attractions. For one, Israel hasn’t yet attacked Iran, though its leaders, going back to Yitzhak Rabin, have all stressed the danger an Iranian nuclear program would pose to Israel’s existence. For at least the past two years, experts have argued that an Israeli strike is highly likely, yet it hasn’t happened.

Another attraction has to do with the personality of the man himself: Netanyahu is much better at talking than doing. Despite his reputation in some circles as a trigger-happy extremist, Netanyahu has, when compared with his recent predecessors, only sparingly used force against foes such as Hezbollah and Hamas. What he does deploy, daily, are words — huge gusts of words infused with drama and portents of catastrophe.

His speech on March 5 to the American Israel Public Affairs Committee convention in Washington is a case in point. Before an audience of 13,000, mainly Jews attuned to threats against their people, Netanyahu drew a direct line between Auschwitz in 1944 and Iran’s nuclear facilities today. If indeed the Iranian nuclear program is a physical manifestation of the Auschwitz spirit, then shouldn’t Netanyahu have ordered airstrikes from the stage? Yet he didn’t.

The former Israeli military official I spoke with Sunday in Tel Aviv suggested three possible explanations for Netanyahu’s lack of action: 1) He is paralyzed and won’t act, no matter what he believes the threat to be; 2) He fears he would risk a serious rupture in his country’s alliance with the U.S. if he attacked Iran unilaterally; and 3) It’s all part of a game, one he has tacitly engineered with Obama.

I remain fairly confident that Netanyahu means it when he says that Israel would strike Iran to prevent it from going nuclear, but this third option is an interesting one, mainly because the game — a sustained Israeli bluff — would seem to be working so well.

Obama and Netanyahu don’t like each other very much. When I asked Obama if he and Netanyahu are friends, he said, in essence, “Well, we’re all so busy with our jobs.” It certainly seems clear from the outside that the two men don’t have a trusting relationship.
Extraordinary Accomplishment

But they have accomplished something extraordinary together over the past two years. The sanctions Obama has placed on Iran are some of the toughest ever placed on any country. Even some hardliners now believe that they just might force a change in Iran’s nuclear calculus. And how has Obama convinced the world that these sanctions are necessary? By pointing to Netanyahu and saying, “If you don’t cooperate with me on sanctions, this guy is going to blow up the Middle East.”

Obama’s good-cop routine is then aided immeasurably by the world’s willingness to believe that Netanyahu is the bad cop.

No one fully understands the dynamic between Obama and Netanyahu, apart from the men themselves. And no one, maybe not even their closest advisers, knows what they said to each other when they met alone March 5 in the White House. I recognize the suggestion that the two men are deliberately tag-teaming Iran is a bit much to swallow, and I recognize, too, that believing Netanyahu never intends to attack Iran by himself is dangerous.

But, if true, Netanyahu is proving himself to be an adept poker player. Obama told me in an interview that, “as president of the United States, I don’t bluff.” Whether Netanyahu bluffs is perhaps the more important question.

AUTHOR
Jeffrey Goldberg is a Bloomberg View columnist and a national correspondent for The Atlantic. The opinions expressed are his own.)