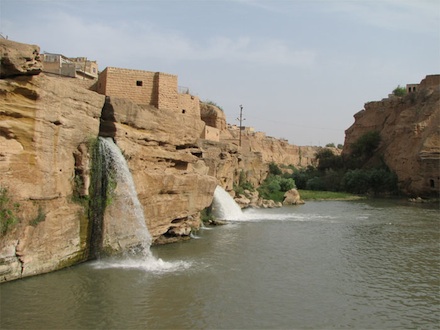 According to Islamic mythology and Persian folklore Jinn or genies are creatures that live in parallel world to that of mankind.

My ominous association with ghosts goes back to my early childhood years. Aunt Sedighe, my father’s youngest sister lived in Shoushtar, one of the oldest cities in the world, dating back to Achaemenian dynasty (400 BC). Shoushtar used to be the winter capital of Sassanian dynasty and it was built by the Karoun River. The river was channeled to form a trench around the city. A subterranean system called ghanats connected the river to the private reservoirs of houses and buildings, supplied water during times of war when the main gates were closed. The ruins of these ghanats still exist and one was connected to aunt Sedeghe’s house where my cousins and I explored if we dared to.

We were told that her house was the primary residence of Jinn and their immediate families. I never was a big fan of Jinn especially the ones who lived in my aunt’s house, I just didn’t care for their demeanor as these creatures scared the hell out of me when we visited my aunt in Shoushtar. Although I was forewarned about Jinn and their tendency to possess children, I never stopped playing in the basement and exploring the deep maze of the ghanat. Yet, the never ending channel connected to her basement was too narrow, too long, too dark and too creepy to conquer.

My eldest sister however believed the toilet in our aunt’s house was more terrifying than its ghosts. It was so filthy that she did not go to the bathroom the entire trip.  At times I ruthlessly mocked this historic city and its Jinn-infested basement, entertained my siblings and offended a large portion of my father’s family who were rooted in this city as a result.

It was because of my insensitive commentaries that a few years later, my aunt decided to move to Ahvaz and left the house to Jinn, its original owners. Not going back to my aunt’s house in Shoushtar however was not the end of my encounter with “Az ma behtaran, the “better than us” creatures, a phrase I heard from my father all my childhood. The “better than us” creatures never left me alone. They appeared in my dreams, visited me in darkness and forever lived in the labyrinth of my imagination.

During the first six years of my life in Ahvaz, we had no bath in our house. Each Friday, the only holiday of the week, my father woke me and my two older brothers hours before dawn and took us to the bathhouse, hammam.

“Why so early?” We pleaded with him every Thursday night and always received the same response. “We’ll be the first customers, better service and no waiting.”

These facts did not alleviate the torment of trudging drowsily through the empty streets in bitter cold. No one should have to endure such an ordeal just to be clean.

In addition to my lack of regard for personal hygiene, I had a more compelling reason to avoid the hammam in early mornings. The creepy anecdotes my father had told us about the ghosts dwelling in hammams convinced me to remain filthy for life. He told us the story behind the famous Persian proverb, “Hump over Hump”

“One early morning a hunchback goes to the hammam and faces a large group of Jinn in a circle holding hands and stomping their feet in jubilation. Unaware of the nature of the festive crowd, he joins the festivities and starts singing and dancing.  The Jinn enjoy his pleasant company and admire his good spirit. As a token of their appreciation, one of them touches the stranger’s back and removes his hunch.”

My father continued, “He leaves the hammam, healed. The former hunchback rushes to the bazaar searching for his fellow hunchback to share his blissful encounter. He tells his friend how the Jinn enjoyed his human qualities and rewarded him for his jolly spirit, “They love festivity and adore us when we sing and dance,” he said.

The hunchback thanks him profusely for giving him a rare glimpse of hope. He obtains the address and the next morning before dawn he rushes to the hammam. All the way he snaps his fingers, sings happy tunes and dances with delight. As he enters the hammam, he faces a host of mournful Jinn sitting with grim faces.  He promptly enters the circle of mourners and starts singing and dancing. The “better than us” do not appreciate the stranger’s lack of respect for their grief-stricken event. To punish the discourteous hunchback, one of them puts his friend’s hump on top of his and kicks him out of hammam with two humps.”

I was more terrified by the stories my father told us about his personal experiences with the “better than us” creatures.

“One early morning in the hammam I was the lone customer with a few bathhouse workers. After relaxing in the hot water basin for a few minutes, I came out and laid face down on bedrock. A worker removed the bath towel from my back and meticulously scrubbed my entire body with the lathery loofa.  As he was tending to me, I looked down and noticed he had hooves instead of feet. He was Jinn. As horrified as I was, I acted as if nothing out of ordinary had happened. After he finished tending to me, I left him an uncharacteristically generous tip. Then I hastily dipped myself into the rinse basin, swiftly dressed and raced out of the haunted hammam.

As I was rushing out the door, the bathhouse administrator, whom I knew for years noticed my nervousness stopped me.

‘What happened Hajji? Is everything all right? Did you not like our service today, please tell me,’ Khalil asked.

“Oh, nothing of the sort Khalil,” I said.

‘Then what is it?’ he insisted.

I took a deep breath, approached him and whispered, ‘Do you know that your worker has hooves–he’s is Jinn.’

The administrator calmly nodded, pointed to his own hooves, and whispered back, ‘You mean like these?’”

Every Friday morning in the Hammam, my first order of business was to check people’s feet. Sometimes I even examined my own father’s feet. Why did he know so much about Jinn? How could he know so much if he was not somehow connected?

At times I snuck up on hammam patrons while they were being washed or when they came out of the rinsing basin wrapped by the layers of towels and stared at their feet. My peculiar curiosity did not go unnoticed by others.  I could sense people eyeing me, whispering to each other, and trying to stay away from me.

I was not concerned about how everyone reacted. What bothered me was my strained relationship with an orphan kid of about my own age whom I met in that hammam, the adopted son of Khalil the administrator. His companionship I cherished dearly. Although our friendship was limited by my weekly one-hour visit and confined to Hammam, I’d grown fond of him, a friend whose name I never learned.

We never had a chance to play together or talk much yet seeing him in that morbid environment every week was bliss. Being around him made me feel safe and helped me forget all about creepy Jinn. But my peculiar behavior has scarred him away and hurt our friendship. Every Friday when he saw me entering the Hammam, he found every excuse to avoid me. Once as soon as we arrived, I went to his room upstairs, he was still asleep. I could see the terror in his face when he suddenly woke and saw me sitting next to him in bed. He ran out to the mezzanine. I chased him shouting, “Don’t be scared, little boy. I just want to play with you.”

Soon after my last Friday visit, the hammam closed its door for good. The rumor was that it was haunted and no client dared return. The deserted hammam remained intact ever since. Now those years are long gone.

To this day, I wake every Friday, hours before dawn and go to the same hammam in the city I was born hoping to see my childhood friend. I sit by the basin, wash myself, and with a smile on my face think of all my father’s spooky ghost stories.