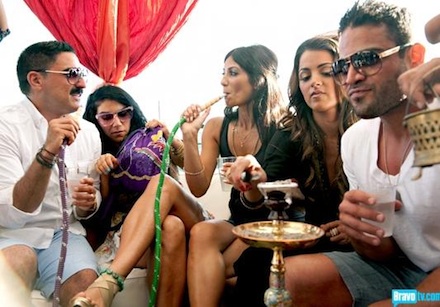 You’ve all had your chances… Now it’s my turn.

SOS is a good moniker for the new Shah’s of Sunset. But maybe we should modify it to SOSAS Because clearly, desperately, someone certainly needs to Save our Ship, and Souls to boot.

In spite of everything that is wrong about it, the Shah’s of Sunset is likely to stay. [Daram Cheshmesh Mizanam, beh Amrikai-ha Nagin!] The more we scream about it, the more everyone watches, and the more the producers are inclined to keep it going. The only thing going for this article is that it is on a fan-less blog in the internet, and thankfully unlikely to stir up any real additional audience share, in this case rather gladly at the cost my own personal ego. As famous a writer as I’d like to be, I don’t really want too many people to read, or react to this piece.

Onto the great Seacrest insult.

The worst part of this honestly, is Seacrest’s gullibility. A consummate professional announcer, a very good radio show host, and of course the skill of Idol is a standard not many have come close to Since Dick Clark. Regardless, you can’t help but like to watch Seacrest. But the pitch that he must have bought, that these group of idiots are somehow representative of any cadre of real Iranians, even in LA, is the biggest load of horseshit I have ever imagined, come back up in my throat, then swallowed it back down bitterly. That he fell for it, and actually signed on to produce it, a la Kardashians, the biggest puzzle of all.

Well maybe not. According to a New York Times article (sorry, I hate linked references, just Google it or believe me), “Not that “these people” actually exist. The stars of “Shahs,” [are] members of the reality tribe, defined not by ethnicity, nationality or religion, but by preening, boastfulness, obsession with appearances, crassness, conformism, thin skin and a tendency to violence. As the wrasse has evolved to keep other fish clean, the reality star has evolved to keep us entertained and make us feel superior.”

That’s the beauty of a false stereotype. You can always deny that is your intention.

Or, to reference another reference, “No One Gives a Shit About Persian Cats”.

I would suggest that if a “300” style writing campaign ever got started (Guys? Anytime now? No?), and sent in, that then NIAC or PAAIA would immediately claim as their idea, it ought to focus on the line producer, the real Mata Hari in our Midst, our fellow Iranian selling off our namoos [Cultural Identity] for at best a 2-season gig, would be that there is an ill-advised Iranian ill-advising the show on what an Iranian Stereotype is. [I will insert the name of the Iranian producer here, as soon as I find it]

The crime of the show is this. Of course these aren’t representative Iranians. Few are that rich, and the ones that are rich, don’t act and flaunt their wealth this way. Unlike Jersey Shore, or the Kardashians, these people don’t actually exist. Neither in LA, nor the Iranian community on average, taken as a whole, or taken assahole.

The most popular character is a fat Reza [Farahan] posed as the only Gay Iranian in existence. At best, an affront to real Gay Iranians at their proper weight everywhere. With the accompanying tired and irrelevant reference to Ahmadinejad’s Columbia University “We don’t have Gays in Iran” gaffe which always has the “…like you have in the US.” left off for some various no-doubt nefarious Israeli Intelligence purposes.

I’m not defending Ahmadinejad here, but you can’t put down even an idiot like Ahmadinejad by misquoting him. What you do is you correct your own stupidity and refuse him the podium, because he is not the “Leader of Iran”. Never has been, never will be. Columbia Provosts are ignorant/dumb for inviting him. But if you need me to fill in, I happen to be the “Captain of the Iranian National Soccer Team”.

As a stereotype, at best, a handful few Gay people (same number as straight folks) are annoying. Frequently they are thoughtful, brave, and admirable. But for the most part they are fun, cute, and adorably huggable. But the biggest insult that Reza offers the thriving Iranian Gay Community, is that he is an utter asshole. He is the Donkey Kong Mario Shah of Idiots.

The show claims these hillbillies emigrated from the Hills… “Tehran Hills that is, Black T”… suggesting they have the slightest clue or connection to the Pre-Revolution Shah era, with which to connect the dots to the show’s unlikely name.

Unfortunately at 38, Reza was 5 in 1979 and I doubt they even waited until that late date to take the fatty-snacks out of his mouth, change his diaper, dress him up in a sailor suit, pack up the trunks, and head to Beverly. So his recollection of Iran, is at best second hand. Apparently while his other hand was busy forging his now “Unique to Iran” sexuality.

Same goes for the rest of the waste of flesh called a cast. Not one has the slightest idea of what pre-revolution Iran was like, or have even breathed one lungfull of Tehran air long enough to have an opinion. Using this as the justification and explanation of how, now, they have acquired taste and a penchant for the finer things in life, is hilariously infuriating, if that description can describe the emotion of laughing while you smash furniture.

The only thing this “Crew of the ill-fated S.S. Minoo” knows about Iran, they likely learned on a shopping spree to the Bijan boutique on Rodeo Drive.

Other wise the show is great, and as the New York Times wisely suggests, we watch it as we would any bloody human disaster unfolding in front of us each week, and we enjoy the cast’s inability to sit comfortably and squeamishly squirm their way through dinners with the ants crawling up their legs of discomfort, at being this exposed to a glaring and leering audience that hates them, thanking their stars they don’t live like this.

The cast are sad and pathetic, locked in a prison of sorts. I’d make an Evin Prison reference now, and as gross as it would be to do that, I simply can’t help it, and so that would have to be the “…insult to Evin Prison” reference.

Even the Farsi-To-English dictionary on the Bravo show page, designed to help the audience with their Learnin’ Persian, is off:

Joon: which means ‘hon’ used after names as an endearing way of saying good friend.

“PST”: Persian Standard Time – for when Persians show up late “you’re on PST”

Hooby: “my friend”; something you say when you greet them

“Tehrangeles”: Term used for Los Angeles due to the city’s large Persian population

Vawaylah: “Oh my gosh”; response to something shocking

Based on the 3rd show though, as usual, the ratings of this reality show are steadily climbing. A full season will tell if it has legs to stand up to Jersey Shore. But then again Jersey Shore is a reality series based on well- reality. SOS is based on a not very clever scam. But clever enough to temporarily fool an already rich enough to afford a bomb if he has to, Seacrest.

No amount of staged antics, faked and rehearsed dialog and situations, and pretend fights designed to generate “juice” among the cast can fool anyone. And we’ll watch it, but only as a sad example of the awkwardness of bad liars lying badly. It certainly isn’t acting or entertaining. Even by the loose standards of reality TV this is total shit.

Shah’s of Sunset is the Cultural Car Crash of the Iranian community, and the latest basis for our ongoing total, sheer, utter, complete, shame, and embarrassment. For us, it is not a tax write-off, it is a siren call of a community crisis we have ignored for 33 years, but won’t admit. And that is the crisis of not actually being organized as a legitimate community. Or else there’d be an outcry, and 6 lawsuits by now. Not one to settle a cast member’s promised pay. And the show would be done for.

Better yet, by now, we would have our own “Big Fat Iranian Wedding” done, and our ripe but fast spoiling talents like Maz Jobrani would have his own Prime-Time Sit-Com. By now. As it should be written, as it should be done.

For, if we are this base, this debauched, this daft, this simple-minded and this tasteless, we most certainly must therefore deserve this “fool’s fate” that the gods have surely divined for us.

I’ll now remind everyone that neither NIAC (look it up), nor PAAIA (ditto) the self appointed greedy guardians of Iranian American Everything, have not said a peep on this “issue of concern to Iranian-Americans” they claim to be chartered by the same 2,000 odd and mostly odd members they gave free memberships to claim to share, to fight for our rights in America and Outer Space (but not Iran, because we are non-political). So they must be too busy sitting and weeping and crying out with joy,

“Free at last, Free at Last, Thank Seacrest Allmighty, We are no longer depicted as Islamic Terrorists in the Mainstream Media at Last!

Of course, I am watching every single minute of the show. As should we all. That way maybe this bad taste will hopefully stay in our mouths forever. Maybe we’ll eventually get up and do something about it one of these decades.