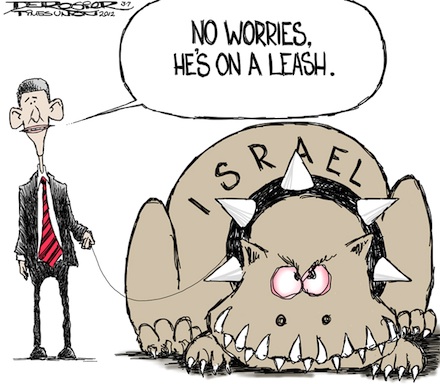 All the recent data points in the “will they, won’t they” speculation about an Israeli strike on Iran point to this: The already slim odds have gotten slimmer.

Sure, a long piece in Foreign Policy this month, sourced entirely to unnamed US officials, makes the case that Israel has extensive influence in Azerbaijan, which could make a unilateral Israeli attack on Iran easier.

But that story appears to be but one salvo in a broader Obama administration strategy to signal through the press that it doesn’t want Israel to strike Iran’s nuclear program, even as it seeks to assure Israel that it is committed to its defense.

At every turn, the US has hemmed Israel in (probably the reason so many “anonymous” officials fed the Azerbaijan story to FP). They have made it clear that they will truly be on their own if they attack unilaterally (read: You won’t force us into a war of your own choosing).

John Bolton, the hawkish former US ambassador to the UN, characterized the story as an intentional Obama effort to undermine Israel. “Clearly, this is an administration-orchestrated leak…. it’s just unprecedented to reveal this kind of information about one of your own allies,” he told Fox.

Mr. Bolton is wrong about the “unprecedented” part; the US has frequently acted to hem in close allies, like Britain or France, when it deemed their military activities a threat to its interests, as the Eisenhower administration did against the joint Israeli-French-British invasion of Egypt during the Suez Crisis in 1956.

But he’s certainly right that the Obama administration is worried about the damage to US interests that could be done by a solo Israeli attack on Iran.

In that context, it’s hard not to see the Foreign Policy piece as anything other than an Obama administration attempt to stave off an Israeli attack through highlighting growing Israeli ties with the country. (Israel has certainly been seeking warm relations with Azerbaijan; in February, Israel said it had signed a $1.6 billion deal to provide drones and missile defense systems to the country.)

NO CARTE BLANCHE FOR ISRAEL IN AZERBAIJAN

The piece didn’t say that Israel has been given bases of its own in Azerbaijan, or that it has been given carte blanche to use Azeri bases when it sees fit. The piece’s central claim is that “four senior diplomats and military intelligence officers say that the United States has concluded that Israel has recently been granted access to airbases on Iran’s northern border. To do what, exactly, is not clear.”

The FP story led to immediate denials from Azeri officials. An Azeri defense spokesmen told a press conference on Friday that Israel will not be allowed to use the country’s territory to attack Iran and said that unspecified press reports were designed to increase tensions between Iran and Azerbaijan.

That makes sense. While Iran’s conventional military is puny compared to the US military, it dwarfs Azerbaijan’s. Iran is a major trading partner for the country, and has a variety of means at its disposal to make life difficult for its northern neighbor in retaliation for an attack.

The story generated plenty of heavy breathing in the press. The Sydney Morning Herald says: “Unlikely alliance between Israel and Azerbaijan raises heat over Iran.” Haaretz writes: “Azerbaijan granted Israel access to air bases on Iran border.” A headline in this paper asks “Did US just torpedo Israeli deal for a base in Azerbaijan?”

The FP story is far from the first emanating from unnamed US officials that appear designed to push Israel farther away from war. On March 19, The New York Times reported that the US military had just finished a secret war game to test the repercussions of an Israeli attack, and concluded that the chances were high that the US would end up drawn into a broader regional war that would leave hundreds of Americans dead.

“The results of the war game were particularly troubling to Gen. James N. Mattis, who commands all American forces in the Middle East, Persian Gulf and Southwest Asia, according to officials who either participated in the Central Command exercise or who were briefed on the results,” the Times wrote. “When the exercise had concluded earlier this month, according to the officials, General Mattis told aides that an Israeli first strike would be likely to have dire consequences across the region and for United States forces there.”

The message was clear: The US is highly unlikely to support an Israeli strike.

Amir Oren, writing in Haaretz, concludes that that war-game, coupled with renewed American promises to fund Israel’s Iron Dome missile defense system (mostly deployed with great success against the unsophisticated rockets fired at Israel from the Gaza Strip), guarantees that Israel won’t attack Iran until the spring of next year, at the earliest.

“Israelis may be the world champions of chutzpah, but even biting the hand that feeds you has its limits when the bitten hand is liable to hit back,” he writes. “When [Israeli Defense Minister Ehud] Barak thanked the Obama administration ‘for helping strengthen Israel’s security,’ he was abandoning the pretension to act against Iran without permission before the US presidential elections in November.”

The US spent $204 million on Israel’s Iron Dome system in fiscal year 2011, and last week the Pentagon indicated that more money should be provided in the current budget year, a plan that has bipartisan support in Congress. The Pentagon says the system successfully shot down 80 percent of rockets recently fired from Gaza. The continued US commitment to Israel’s defense can be seen as the carrot in this scenario.

WHY THE US IS WORRIED ABOUT AN ISRAELI STRIKE

Gary Sick, who coordinated the White House response to the Iran hostage crisis in 1979-80 and who served on the National Security Councils of presidents Ford, Carter, and Reagan, made the case for why the US is worried about unilateral Israeli action in an opinion piece Friday. He says it could lead to the collapse of the sanctions regime that President Bush and President Obama have constructed against Iran, and leave the US on the hook for the aggression in the eyes of much of the world.

Whether the US gave the green light or not, “for Iran and just about everyone else, the fact that most of the Israeli aircraft and bombs were made in the US would be all they needed to know,” Sick writes. “On that first morning, the UN Security Council would convene in emergency session to consider a resolution denouncing the Israeli raid. If the United States vetoed the resolution, that would remove any lingering doubt of U.S. complicity.

“Perhaps more significant, however, would be European support of the resolution. This would signal the beginning of the collapse of the sanctions coalition against Iran that had been so laboriously assembled over the past several years. Both the Europeans and the Americans had operated on the tacit belief that crippling sanctions were an alternative to war. With the outbreak of war, that assumption would no longer be valid.”

Everything is tea-leaf reading at the moment. Israeli Prime Minister Benjamin Netanyahu and many on the country’s right insist that Iran is a major threat to the Jewish state’s existence, and fear can push people to do surprising things. But the leaves are almost overwhelmingly telling us no war soon.

AUTHOR
Dan Murphy, who has reported from Iraq, Afghanistan, Egypt, and more than a dozen other countries, writes and edits Backchannels for the Christian Science Monitor. The focus? War and international relations, leaning toward things Middle East.