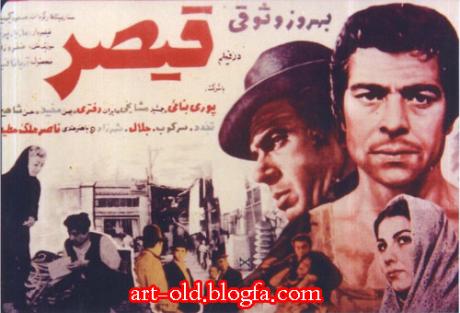 For a better understanding of the social attitudes of the majority in the Iranian religion-obsessed society of the 1970’s, maybe it’s not a bad idea to remember the film “Kaiser” produced in 1969. This film was intensely welcomed by the majority of people and the vast majority of the film critics (a few, criticized it).

The film’s main theme was honour-revenge and the importance of ‘honour worship’. In this traditional outlook, men should be the protectors of women’s honour and “…rape is not a devastating assault on the woman’s body and soul, but is a violation of the Iranian man’s “sacred realm”. A raped woman might as well commit suicide. Otherwise, there is no doubt that ‘Fatima’ will be killed by her brave brothers, Command and Kaiser.”

The few disapproving critics were Dr. Houshang Kāvousi and Houshang Tāheri who stood against the film’s massive and widespread wave of support. These two critics presented the intellectual theme of the film as reactionary. The title of Kāvousi’s critique was ‘Kaiser, from Dodge City to Nāeb-Gorbeh Little Bazār’. In response to Kāvousi’s write-up, Massoud Kimiaei says, “The monetary value of the seeds my film viewers have de-shelled is more than the total sales of Kāvousi’s film.” (10)

“The problem with the film “Kaiser” is that in an urban society with modern manifestations, it relies on traditional (feudal) morality. It is said that “Kaiser” defends ‘personal revenge’, but what is worse is that in this film there is no sign of individual responsibility (foundation of modern civic culture): following the rape of a woman, two families (tribes or clans) begin fighting and six people on both sides die. In Iran, after the Constitutional Movement, with the relative growth of modern institutions and arrangements, the “custom of bravery” (Javānmardi) lost its base and then its legitimacy. But this custom’s degenerate heir continued more or less in the form of ‘lumpenist culture’.

“The disastrous consequences of this inheritance are obvious to everyone. In the film “Kaiser”, the period of the storming of the thugs and hooligans who grazed neighbourhoods and demanded bribery, is remembered with regret and nostalgia. Command and his brother Kaiser have apparently abandoned wickedness and hooliganism; Command has gone to Mecca, has repented and now is a butcher, and Kaiser has opted for “halāl business”. However, lumpen mentality is still alive in both brothers. Both seize a knife at every opportunity. The story of the 20th century Iran was full of battles between tradition and modernism (construction of modern society), and the film Kaiser should be evaluated in this very context.

“With Pahlavi regime’s arrangements, modernization took place on the surface and as an imitation of the West. The traditionalist layers of the society felt alarmed in the face of the fast track modernization and reacted with confusion and concern.” (11)

According to Massoud Kimiaei, the director of the film, Ali Shariati said that this film and its agenda were approved by the Islamist paradigms. (Shariati was one of the Islamist theoreticians who gained a considerable influence among the religious- oriented students and middle-class of the Iranian society then.)

“I remember he had seen ‘Kaiser’ and ‘Cow’, saying that between the two films, he liked ‘Kaiser”, because he believed that “Kaiser’ turned out to be a ‘male’ and ‘dynamic’ film.”(12)

This film with its very broad appeal could very well reflect the dominant intellectual tendency of the Iranian society of that time. The wave of Velvet-Hats (Kolah-Makhmali) and thugocratic films that came afterwards also gave new life to the declining Farsi films. What the dominant wave of marginalized urban class was injecting to these films, could be described as religious faith and belief in tough guys and dagger-stabbers who were the criers of justice. Religion-mongers and Mullahs have always emphasized the tradition of justifying men’s rights. According to these teachings, a society consists of a group of men and ‘males’, who are supposed to regularly protect and safeguard the covered and weak half of the society, whom are ‘females’ or ‘honours’. Such teaching promotes masculinity as a bully with the ability for muscle strength showdown. Not surprisingly, they always turn to the neighbourhood’s big lout to promote the ‘right’.

In this section, we have examined the longstanding ties between the Mullahs and the lumpens. The same thugs who drew daggers and established order in the neighbourhoods, also actively participated in religious ceremonies including Tāsoua and Āshoura. They drank alcohol and had eating binges, and they prayed and fasted, collected religious contributions and the Imam’s share for the neighbourhood Mullah. That’s why they enjoyed both the supported of the neighbourhood Mullah and the respect of the populace. These were dagger-stabbers who were very popular among people and won the public hearts, because they equally maintained the neighbourhood’s ‘honour’ (Nāmous) and ‘religious zeal’. Apparently, in the popular outlook, morality and culture were summarized as ‘lumpen’s wisdom’.