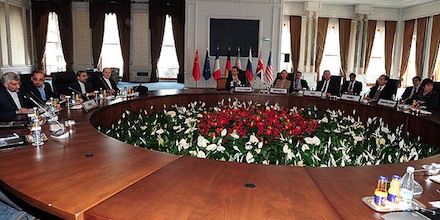 This weekend if you’re not busy, why not head on over to Turkey for some fun?

You too can stay at a nice hotel, have some surprisingly good Turkish food, see the sights, and try your hand at the new casino being set up for Iran, the US, and some other lesser countries who will irresponsibly gamble the futures of their peoples away with misguided attempts at what we can only call posing.

Irresponsible, because like you the tourist, no one, but no one at this meeting has any authority. Everyone is a dog who must first phone home, then come home, to decide what on earth the next steps might be?

This is why I suggest that you go. You’d probably have more success!

What is missing from ANY loosely termed “Diplomacy” these days, is for the leaders to meet, discuss the issues, and make a decision on the spot. Then you can “send in the clowns” to dot the i’s and cross the t’s.

For ANY US-Iran relations to improve or work or fix or fight, Obama and Khamenei need to talk face to face. OK Skype.
.
.
.
.
.
This is of course so ridiculous a notion, I had to stop writing this until I stopped laughing.

But it is unfortunately still true.

Goldman Sachs owns the US, but lets Obama wear one of their nicer suits when he goes out, and apparently Allah now owns Iran Lock, Stock, and every Barrel (of Oil), but has given the keys to Mohammad’s chariot to heaven, to Khamenei to take out for a spin.

The main issue at stake for Iran, is not so much in actually developing nuclear fuel, but the interesting reaction it gets out of Israel and the US for even thinking of doing it. Parents of a certain kind of Iranian child know what I’m talking about it. Mom’s call them “Pedar-Sookhteh”, while Dad’s call them “Madar-Sag”. Usually some valuable object is missing, broken, or recently swallowed.

For the US, clearly the issue is not in whether Iran has a nuclear weapon, but in Israel’s incessant screeching “fat girl sees a mouse” fear of it.

The other misunderstanding is that the US supports the Iranian freedom movement. Hell, even free Iranians don’t support the Iranian freedom movement, why would you think the US does? Didn’t you hear? Free Iranians support NIAC or PAAIA, or both for the same free membership price. Freedom might not be free, but at least an annual NIAC/PAAIA membership is! And you know what FREE gets you. Exactly! Nothing.

So yeah, I said it. The only reason the US wants to prevent Iran from getting a nuke, is Israel.

Not that it isn’t a perfectly good reason. It is a great reason, if you look at the history of the US protecting it’s homely looking slightly overweight step-daughter.

Hey! Who’s homely? Israel might not be the ideal High School Prom beauty, but she’s is no dog either, just a bit husky for her age. OK big boned. Now that I think about it, this may be why Arabs and Palestinians seem obsessed with pinching her ample bottom, and squeezing her lily-white breasts so much.

So with the real facts on the table, enjoy your weekend in Turkey. Try the Doner Kabab, it’s like a cross between Koobideh and a Burger wrapped in a Kosher Pita, all thrown together.

Kind of a culinary metaphor for the US/Israel/Iran nuclear talks, except with far less indigestion.