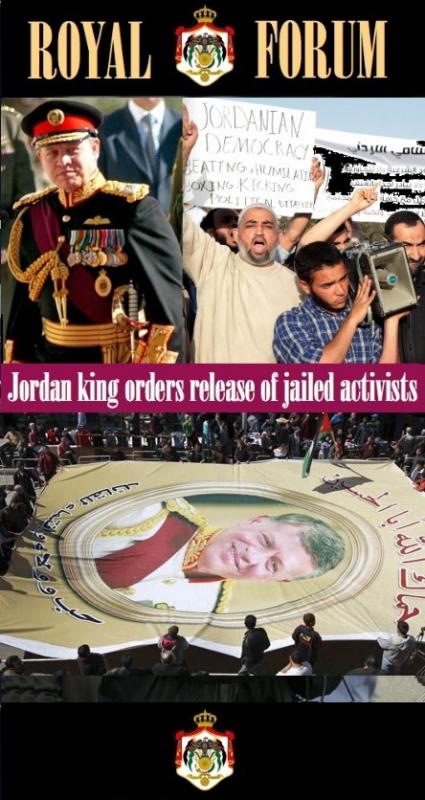 The King has recently named a respected international Judge as Prime Minister.

Down to Earth King

Jordan’s King Abdullah appointed Awn al-Khasawneh, a former judge at the International Court of Justice, as prime minister in order to promote public confidence in a reform process that has been hit by several instances of violence and government failings.

Down to Earth King of Jordan visits tribe in desert:

Pledging Not to Behave like Assad with his own People

King Abdullah of Jordan: ‘If I were in Bashar al Assad’s shoes, I would step down’ (BBC):

The King of Jordan says that he thinks that Syria’s President Bashar al-Assad has an “expiration date”.

President Obama and King Abdullah of Jordan speak after their bilateral meeting at the White House. January 17, 2012.

Unbiased Coverage on ‘Pro Democracy’ Protests In Jordan or equally of those ‘supporting the Monarch’ remain Rare due to a heavily controlled Press. Foreign Correspondents have not been able to work as freely in recent years. Hence a political recuperation by more controversial media networks like Iran’s Press TV trying to depict the events in Jordan to fit it’s political agenda.

Jordan’s March 24 Movement used FACEBOOK to organize a peaceful demonstration demanding political reforms. Counter-protesters hurled insults and rocks in a non-stop attempt to disrupt an otherwise peaceful demonstration. The March 24th participants kept their composure and remained throughout the night. This video documents what happened the following day when the state acted to end the protest.

“The king instructed the government to take all necessary measures as soon as possible to release the jailed activists,” some of them from the southern city of Tafileh, he told AFP.

“The decision was taken after the king met today with Tafileh’s tribal leaders, who urged the king to pardon the activists.”

Jordanian military prosecutors have accused the young activists of incitement against the regime, rioting and insulting the king.

Six of them were arrested in mid-March after a demonstration in Tafileh, while the other 13 were detained after a protest outside the prime minister’s office in Amman.

Following the king’s instructions, the military state security court told the state-run Petra news agency it will release later Sunday 38 people arrested after protests that were held in Amman and Tafileh.

It was not clear if the 19 detainees would be among them.

Jordan’s opposition Islamists and other political movements as well as international human rights organisations have repeatedly demanded the authorities free the activists.

In March, the court released an 18-year-old political activist from jail after the king pardoned him for burning a picture of the monarch.

Russell Peters Punk’d by the King of Jordan ;0)