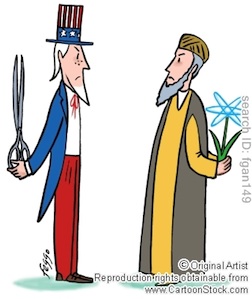 Call me naïve. It won’t be the first time and certainly not the last. But you know what? I’d rather be naïve than see a conspiracy behind every bush and a can of worms under every stone. We have to believe, if only occasionally, that things may work out after all. Case in point, the nuclear talks with Iran being held in Turkey.

A deal may be in the works. And why not? What’s there not to like in a deal?

For Iranians, renouncing nuclear weapons in exchange for a) at least a partial lifting of the sanctions that are crippling its economy and causing grumbling in the population—not good for the regime— and b) being allowed to continue enriching uranium for peaceful energy purposes. Supreme Leader Khamenei who knows which side his bread is buttered on has publicly declared that building a nuclear weapon would be “a grave sin,” thus presenting a face-saving rationale for Iran entering into discussions with Catherine Ashton for the European Union, with reciprocity as the operative word. (I can’t help being curious, though: In exactly what verse of the Koran has the Prophet Mohammad pronounced nuclear weapons sinful and anti-Islamic?)

That being said, the possibility that talks may eventually lead to a solution to the impasse everyone has been stuck in all these years doesn’t please one and all. Not Netanyahu who mutters about “freebies” and who has been inching toward attacking Iran, sick of seeing little Ahmadinejad strut up and down the world scene, singing his “Israel must go” tune. (That the man has or has not actually called for the destruction of Israel is irrelevant but the thought keeps cropping up, an irritant to Israelis, Americans, and other stakeholders.) Not Erdogan saying that Iran is “continually losing its international prestige” for its support of the awful Bashar Assad still killing his own people despite the supposed cease-fire.

Not the Syrians, Hamas, and Hezbollah who all owe their continued existence to the Islamic regime and worry about seeing their sponsor adopt a more internationally accepted behavior.

Not the European Union, uneasy at once more sitting down to negotiate with Iran, an exercise that has not yielded positive results in the past. The general picture of the Islamic regime is that whatever promises Iranians make, it will be for show only; that this government is at heart a government of snakes; that they would cut their nose to spite their face; and so on.

All these suspicions may have a basis in reality. The Islamic Republic of Iran is a rogue nation that insists on a respect it doesn’t deserve and wants to be considered a player although it has cheated nonstop. Then again, times change, people get weary, and… what can I say, even when our expectations are defeated over and over, hope springs eternal. As it should.