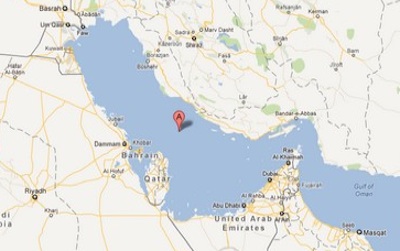 There is a new Gulf war underway, but be careful what you call it.

Google unwittingly sparked the conflict last week when it dropped the name “Persian Gulf” from the body of water separating Iran from the Arabian Peninsula. It declined to call it the “Arabian Gulf” or simply “the Gulf,” either, perhaps making its 250,000 square kilometers 97,000 square miles) the biggest landmark on Google Maps to go nameless.

Iran, the modern state of Persia, lost no time in launching an attack on Google. “Google[‘s] fabricating lies… will not have any outcome but for its users to lose trust in the data the company provides,” Bahman Dorri, Iran’s deputy minister of culture and Islamic guidance, told the Fars News Agency on Saturday.

Google’s nameless decision is the latest in a controversy over the Gulf’s name that goes back to the 1960s and has ensnared everyone from the Asian Games, to the US Navy to National Geographic magazine.  On one side is Iran, which has adopted the Gulf’s Persian name as a symbol of national grandeur; on the other are the Arab Gulf countries, who fear Iran is staking a territorial claim.

“The name of the Gulf has become a highly emotive controversy in the region, to an extent that can be difficult to understand,” Jane Kinninmont, senior research fellow at the Middle East and North Africa Program at London’s Chatham House, told The Media Line.

Google’s decision came only days after Iran’s “National Day of the Persian Gulf,” which is marked April 30 to commemorate the 16th-century battle in which the Iranian Navy defeated the Portuguese. A spokesman for Google couldn’t immediately provide any comment on the decision or why it was taken now.

The dispute has taken on an added dimension as the two sides spar over Iran’s nuclear ambitions. Saudi Arabia and most of the other Gulf Arab powers have sided with the West in seeking to rein in Tehran and have accused Iranian leaders of fomenting Shiite unrest in their Sunni-majority countries.

Analysts are not sure whether Iran is, in fact, stirring up trouble in Bahrain and Saudi Arabia. But Tehran has certainly engaged in symbolic warfare. Last month, its president, Mahmoud Ahmadinejad, visited Abu Musa, an island whose sovereignty is disputed with the United Arab Emirates. Earlier in the year it staged naval exercises in the Strait of Hormuz, the channel that connects the Gulf to the Gulf of Oman and the Arabian Sea, two bodies of water whose names have not attracted any controversy.

Google Maps is no stranger to political controversy. It was forced to correct how it displays a microscopic island in the Strait of Gibraltar claimed by both Spain and Morocco after erring twice. A year-and-a-half ago it created an international incident when a Nicaraguan army commander, relying on Google Maps, moved his troops into an area that was in fact in Costa Rica’s territory, taking down a Costa Rican flag and raising the Nicaraguan flag.

The name controversy over the Gulf, however, has no practical importance. To paraphrase Juliet, “What’s in a name? That which we call a gulf, by any other name would still be an international waterway.” Neither Iran nor the Gulf Arabs dispute that.

Nevertheless, history is on Iran’s side. As far back as the ancient Greek geographers Strabo and Ptolemy, it was known as the Persian Gulf or some variation of it.  The 10th-century CE Arabic Christian writer Agapius did the same. In more recent centuries, mapmakers have employed the terms Arabian Gulf, Gulf of Basra and Gulf of Qatif after a port now in Saudi Arabia.
Arab countries typically called it the Persian Gulf until the 1960s, but Egyptian leader Gamal Abdel Nasser, rising a crest of Arab nationalism and unhappy about Iran’s then friendship with Israel, lobbied for a name change. Arab nationalism has since receded, but the Arab Gulf has not budged on the issue.

“It’s useful for Iran to whip up nationalistic fervor against its Gulf Arab neighbors as a distraction from its internal economic problems and political infighting,” said Chatham House’s Kinninmont. “That said, the name Persian Gulf is well established in international usage — and the name of a body of water doesn’t have implications for sovereignty.”

The name-calling issue has put outsiders in an awkward position.

Tehran banned National Geographic from newsstands and barred its reporters in 2004 after it published a world atlas that called the waterway the “Persian Gulf” but added the words “Arabian Gulf” in brackets. Demanding a “correction”, Tehran promptly banned the American-owned magazine from Iran. The magazine surrendered.

Iran employed the same tactics two years later when the British news magazine The Economist published an article and map that referred to “The Gulf,” a favorite compromise for those who are trying to steer of the controversy. A spokeswoman for the magazine wasn’t available for comment but an informal search revealed it was using Persian Gulf frequent, including in a 2010 article on the controversy.

The Gulf Arabs have not been above symbolic gestures, Two years ago, they pulled out of the Islamic Solidarity Games, which were being hosted by Iran that year after they found that the medals and official logo called the body of water the Persian Gulf. The Iranians refused to back down.

Even the US Navy has annoyed the Iranians. Before it dispatched the aircraft carrier the USS Abraham Lincoln to the area, the navy ordered all personnel in 2010 to call it the Arabian Gulf. When word got out, angry messages began piling up on its Facebook page.

Google seems to have taken a different tact on its Google Earth site, which shows the planet’s natural contours with an overlay of human borders and place names. As of Monday, the waterway was called both the Persian Gulf and the Arabia Gulf, the latter placed below.

AUTHOR
David Rosenberg is Media Line‘s Senior Business Correspondent. has reported from Israel on business, economics and politics for more than two decades. He was Israel bureau chief for Bloomberg News and business editor of The Jerusalem Post, and earlier worked as a correspondent for Reuters and Dow Jones.