When Google fails to google! 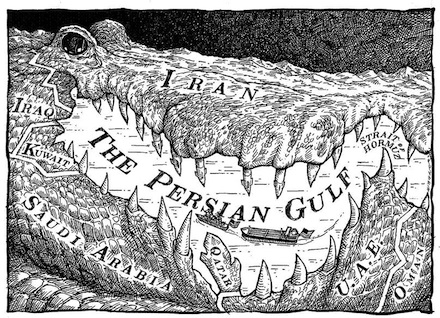 Google’s claim that it didn’t intend to take a stance with regards to properly naming the Persian Gulf in its maps is a big fabrication. A decision with the inherent risk of inflaming the feelings of millions of people in Iran and around the world is not made without forethought and deliberation. Google has been well aware of the history of the rogue and in my view the evil campaign for changing a historic name – the Persian Gulf. It seems to me that this Google’s decision goes beyond a lack of stance.

Google as a giant company (institution!), has the greatest resources for researching and authenticating claims, as well as finding officially and historically sanctioned labels and brands. But Google’s complicity in this effort [to erase history] will only tarnish its image since this rogue attempt will undoubtedly end in failure. Changing the “Persian Gulf” name is as impossible as changing “Greece” or “Rome.” Google’s only “gain” in this will be a tarnished image in siding with fabricators and charlatans.

Hey Google! isn’t it true that one day, a handful of decades ago, a man woke up from deep sleep and decided to call this body of water something different from its historic name? Google must know best, of course. Google can do research and find out who that person was. Come on Google, do it. Google it! You probably aren’t in the habit of using Yahoo search or Bing, but these will do as well.

Google has definitely taken a stance here removing the Persian Gulf label from its maps; and I have high intuition that it will reconsider its decision. It is only fair that Google did the right thing. After all, Google is an amazing phenomenon. I personally have used Google more than any other brand. It has made life so much easier for all of us. I thought this about Google one day: “Google is a gift that never stops giving.”

But alas! Google has broken my heart this time. I also know that it has offended the sensitivities of objective and fact loving people. Most definitely it has hurt Iranians. But why? Why would Google do something to hurt so many millions of people? What was the incentive and the catalyst for this maligned undertaking? There are many questions and they must all be answered for the sake of intellectual accountability.

How was Google lured into this debacle? I can vaguely guess. Material incentive is the only tangible that I can think of at the moment and if so, someone please delineate it for us. But regardless of the incentive, the act is one of insult and aggression against the Iranian people worldwide.

Previous to the present time, I used to tell my Iranian friends that we didn’t need to worry about any Arab entity wrongly naming this body of water. I would tell them that in the eyes of this great world of ours facts will remain facts and the truth will always remain the truth. I used to tell them that this misrepresentation was so childish that no credible international body would subscribe to it. I wasn’t worried. I wasn’t worried because I thought that the aggression in the intent would be obvious to anyone who is simply literate. But this is a case of a phenomenal institution like Google siding with the rogue and the aggressive. Google’s gift this time is foul smelling and bitter.

Google, or someone in Google, has breached the norms we should live by. My point here is that Google’s act is beyond respectable inalienable norms.

Remember the person who woke up from sleep and used the fictitious name for the first time? That was a malicious dream, with rouge intent. Someone in Google has taken his bait.

With my current state of mind, I wonder if I google a location, I would find a factual place, a fictitious one, or nothing at all. I know one thing for a fact: Persian Gulf is a very old place based on (all) historic maps and literature.

Google has failed here, or hopefully has had a temporary lapse in its ethical, high-principled and professional judgement. The search engine Google is just a tool but if Google is an institution, it must act as an authority with high intellectual standards.

Finally, I expect responsible elements in Google to be the final judge and “google” the facts. I am eternally hopeful that Google’s “stance” would uphold professional journalism. I demand the best from Google. Let’s see how this intellectual insult is finally amended.

PrevPreviousThe chosen people in Iran
NextAstrology Report: 11-13 May 2012 Moon in Aquarius or Bahman.Next