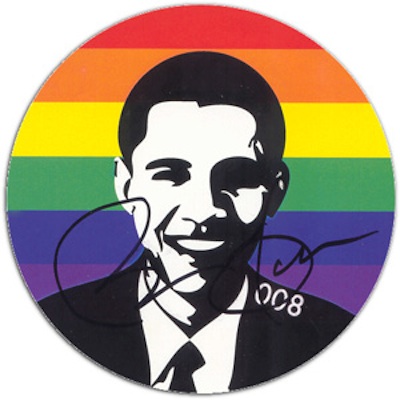 Let’s hear it for the President. Bravo! Bravo is also Italian for brave and it takes a brave man and a strong heart to come out in favor of gay marriage in a country dominated by the raucous—and nefarious—Koch Brothers, Rush whats-his-name and assorted religious freaks. Whether Biden had been encouraged a few days ago or not to “force” Obama into making his own position clear is open to speculation but the result is what counts here.

Again, bravo. No matter how analysts cut and dice pre-election numbers, no matter how many votes Obama gets from the LGBT community, the liberal voices and some independents, he is at risk of losing more. So, unless he is as foxy as his detractors paint him and is two steps ahead, this is one of those too, too rare issues where conscience trumps worries about a political future.

Why am I so pleased by and so much in favor of the earthquake that has just shaken the present landscape? Neither myself nor anyone close to me belong to the gay community. Death, distance, plus the natural erosion of friendships have taken away the individual gays or gay couples I used to know. What has not changed is my total, total belief in freedom which goes from the light reaction—an inability to wearing tight clothes—to the heavy one—repulsion toward repressive regimes. People are born free and must be allowed to live free and make their own choices, period.

This major development in the US plus the recent presidential election in France have  made me come to terms with my own position on the political spectrum. Swinging left didn’t really tell me where I stand on the myriad concerns citizens of the world face in 2012. I too have knee-jerk reactions, I too judge and despair. Here, in enlightened France where I spend a great part of the year, the non-stop discussions regarding various social and economic visions engage me, anger me, and leave me stranded. Had I been French, this past May 6th which saw Hollande win the presidency against Sarkozy, I would have been hesitant  to cast a vote for either man. My reasons would have been the same as the ones advanced by most analysts. Sarko has an unpleasant, abrasive personality but economically he has done fairly well in these difficult times. Hollande, a pleasant enough man and one of consensus, is unskilled in public affairs and represents a brand of socialism that has been obsolete for decades and doesn’t correspond one bit to present-day concerns. There is the safeguard, though, that the reality of government soon changes the most idealist campaigner into a much tougher pragmatist. We’ll see.

So, to conclude, and as a coda to my being so pleased with the Obama announcement, I realize that where I am a liberal in the U.S. and have a liberal view of every single issue, the gallic discourse leaves me unhappy and uneasily centrist.

In the U.S., I am, check, against guns, against the death penalty, against states doing their own thing when it pits them against the federal government, against not giving immigrants, (especially the hard-working and often voiceless Hispanics) a fast track to citizenship, against discrimination whether of gender, race, or sexual orientation, pro-choice, pro gay marriage, pro universal healthcare, anti-war, anti religious extremism and creationism, pro food stamps and any possible help to minorities, the poor, individuals or communities unable to fend for themselves. Added to that, I am in favor of a moderate brand of capitalism, of giving everyone a fair shake, of taxing the rich more than the less-rich.

In Europe, I am more conflicted. I am against immigrants who take advantage of the hugely favorable social benefits, refuse to integrate and often despise the countries that take them in, I am against a lack of work ethic which, especially in France, encourages both selfishness and slackness, I am against people demonstrating en masse, refusing to contemplate any reduction of  the amazing protections of the workforce. Future generations? The common good? Forget it! It’s me, me, me! Work less, earn more, don’t let anyone tell you otherwise, is the slogan to which fists are raised. I am also very much against the laxism that has allowed my beautiful Paris to become the Western world’s capital of panhandling and petty crime.

There you have it, probably more information about my personal creed than you ever wanted to know.