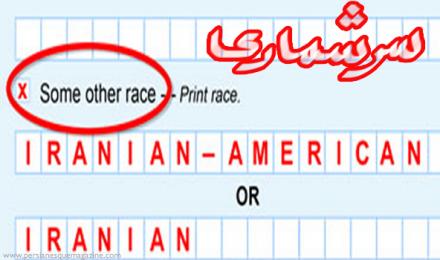 Last month the much awaited results for the number of Iranians in the 2010 Census came out. Are you ready? The count is a whopping 289,465!! Say what? Ten years ago, in census 2000, we were told there are 338,000 Iranians. Did we shrink by 49,000? Now before you all bent out of shape and God forbid start an “Occupy Census Bureau” movement, let me explain. Trust me; I know a thing or two about numbers as I studied Statistics and I do Market Research for a living.

Every 10 years, since 1940, there has been a census in the Unites States. Before Census 2010, two questionnaires were used to collect information: a “short form” with only basic questions such as age, sex, race; and a “long form” with the basic short-form questions plus about 50 additional questions on socioeconomic and housing characteristics. Only a subset of households received the long-form questionnaire—about one in every six in 2000. The long form has a question on ancestry, and that’s how we got the number 338,000 Iranians back in the year 2000. We all knew that these numbers were low and blamed it partly on Iranian immigrants being suspicious of Census activities and did not want to be identified by their race.

Now fast forward to 2010 Census. For the first time it was decided that the 2010 Census will be a short-form-only census. This is because the decennial long form has been replaced by the American Community Survey (ACS). The ACS is a nationwide, continuous survey designed to provide demographic, housing, social, and economic data every year. The ACS replaced the long form in 2010 and thereafter by collecting long-form-type information throughout the decade rather than only once every 10 years.

Knowing that we need a more accurate count of Iranians, an organization was formed by the name of Iranians Count 2010 Census Coalition or ICCC for short. The idea was to ensure maximum participation by Iranian Americans in the U.S. Census. Surprisingly for the first time ever, over 47 non-profit Iranian American organizations came together. We had great participation from Iranian media, businesses, charities and other civic organizations. Under the leadership of our own Mrs. Nadia Babayi, as partnership specialist, an aggressive marketing campaign was launched to inform Iranian Americans across the country about the importance of participating in the Census and how to accurately complete Census forms. Everyone was encouraged to answer question number 9, the race question, by marking “Some Other Race” and then write-in “Iranian”, “Persian”, or “Iranian-American”.

We waited and waited and finally after paying the Census Bureau $3,100 (that’s Federal Government for you), thanks to funding by PAAIA and Farhang Foundation, the special tabulation came out last month indicating that a total of 289,465 responded to the question of race in the 2010 Census by marking “x” in the “Some Other Race” box and writing Iranian/Persian alone or in a combination. The best way to think about this number is to say there were 289,465 people who proudly declared that they are Iranians. There might be two reasons for this low count; First, Iranians are well blended in the American culture and no longer wish to be identified by their roots; secondly, Iranians are still suspicious of Census activities and do not want to be identified by their race. Therefore, a great number must have checked the “white” box under the race question. Fact is many Iranians say goodbye to the old ancestry as soon as they become a U.S. citizen, especially those born in the United States.

So what’s an accurate count? Remember the American Community Survey (ACS), I mentioned earlier? While it is only mailed to bout 3 million addresses per year, ACS produces estimations on ancestry. Unlike the ACS, the Decennial Census reaches every household and has no margin of error. I looked at a 3 years estimate, or 9 million addresses, to get a better picture of the race/ancestry question. According to ACS for the 3 years 2008 – 2010, there is an estimated 448,722 Iranians living in the United States. Of course since this is a sample data, it has a higher margin of error, as we statisticians call it. The margin of error for the Iranian table is plus or minus 10,862; which means there might be as many as 459,584 Iranians based on ACS data. Now if we assume there were just that many Iranians who marked their race as “White”, which is a reasonable assumption, then our count could be as high as 919,168.

We may never know the accurate number of Iranians living in the United States. Even the Census Bureau acknowledges that the number of Iranian Americans has historically been under-represented in Census data. Looking at the ACS data, there are some interesting facts about Iranians vs. general population that you can brag about. Here are some: People with B.S. Degree or higher 59% vs. 28%; People with Masters degree or higher 30% vs. 10%; People who entered the U.S. before 2000, are 75%; People born outside U.S. is 65%; Median Household Income $68,000 vs. $51,000; Are in professions such as Business, Management, Art 54% vs. 36%; Owner occupied (home-owners) 60%; Median Home Value $480,000 vs. $187,000. As many of you know most of us (48%) live in California, followed by New York/New Jersey (9.1%), Greater Washington D.C. including Virginia and Maryland (8.3%), and Texas (6.7%). Although the special tabulation data (some other race, Iranian) puts the percentage of Iranians in California at a higher number of 54.3% indicating the ICCC campaign was more effective in California.

So there you have it. The number of Iranians in America is not as high as 2 millions as some people suggest and is not a low of 289,465 either. Census 2010 was still a success for the Iranian community since all organizations came together and for the first time in a long time we became united under a single issue. We now have to wait until Census 2020. Till then we can count on the shameful reality show “Shahs of Sunset”. Perhaps this show would shine some light on us and next time we can proudly say we are “Iranians”. Until then, there are two other sources that perhaps can give you a more accurate count. They are: the Interest Section of Iranian Government in Washington D.C. and the number of people who attended Gogoosh concert when she first came to the United States!! As every single Iranian attended her concerts. Good luck getting information from either source. Trust me, I tried with no avail.

In closing these are my thoughts and analysis. I am sure there are smarter people who can discuss/analyze these numbers better; if you want to discuss this further, drop me a line. Love to hear your thoughts.