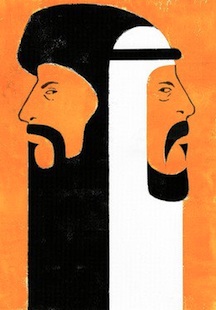 As the points continue to add up, the Islamic Republic of Iran is frantic to change the debate about Iran, yet again. Its recent focus on seeking to win the Persian Gulf – Arabian Gulf battle proves that the Islamic Regime in Tehran will play both sides of the coin if it means buying time for its nuclear weapons program.

After discouraging Nowruz events year after year, essentially banning Zoroastrian inspired holidays and customs, and sometimes outlawing relics of pre-Islamic Persian culture, it seems very odd for the Mullahs to suddenly rally to save the name “Persian Gulf,” rather than perhaps offering a newer, more Shi’a Islamic name. With the everlasting Iranian-Arab rivalry aside, the only reason the Regime would productively join this debate, it to navigate attention from a different one.

In the last month, there have been numerous revelations concerning Iran’s actions in regards to its pursuit of nuclear weapons, as well as its other rogue political interests and endeavors. As the pressure mounts, especially as the second round of P5+1 talks loom, the Mullahs haul their efforts to divert, and unify, the people of Iran’s energy. The rebirth of the Persian Gulf vs. Arabian Gulf Saga is reborn, here.

In the last month alone, the Mujahedin-e-Khalq, better known as the MeK organization which is currently denoted by the State Department as a terrorist organization, as well as other sources of intelligence, have issued evidence regarding Iran’s clandestine activities.

In a recent report, MeK published pages of detailed data regarding the facilities, the procurement activities, and the scientific endeavors pursued by 60 individuals under the orders of the Revolutionary Guard Corps. While these 60 people were not named in the initial report, MeK claims it can and will produce the names, and further personal details, when the time is ripe.

Furthermore, a few days before a South Korean IAEA inspector was tragically killed, and his colleague badly injured in a car accident on their way to a meeting, pictures of an Iranian nuclear facility renewed the very suspicions the Mullahs seek to squash. The aerial snapshot of a nuclear facility in a rocky mountain region showed signs of the facility seeking to rid itself of evidence that its veering off track of ‘nuclear technology for peaceful purposes’ as the Islamic Regime, puts it. “Veering” perhaps is not the right word to use, as the Regime’s initial intention with developing nuclear materials was always the creation of a nuclear weapons arsenal.

This all, just before another high-profile execution after a sham trial which mocked the concept of law, jury and judge. Yet another individual killed, yet another soul wasted, and yet another chance for a better future robbed from the Iranian people.

With all this going on, oddly enough, it benefits the Islamic Republic to engage itself in the rhetorical Gulf War. Surely, Iran’s people are already fighting this battle on Facebook and Google, and of course the Mullahs will use it to their benefit. This is perhaps the Islamic Republic’s first true Public Diplomacy campaign – sadly enough, as has been proven time and time again, the intentions behind it are absolutely sinister. Interested in following the debate more closely? Check out a colleague’s Facebook group, The Cold War in the Gulf, which follows the discourse regarding this event.