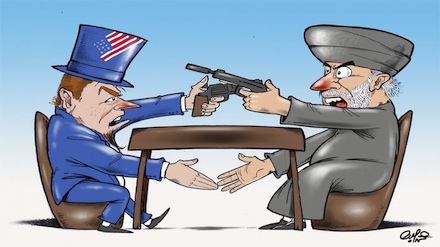 In one of the most memorable lines of his March 4, 2012, speech on the Middle East, President Obama declared, “Iran’s leaders should understand that I do not have a policy of containment; I have a policy to prevent Iran from obtaining a nuclear weapon.” However, containment is rarely a policy one prefers, with its implication of preventing a bad situation from getting worse. Instead, it tends to be the policy one is left with once other realistic options have been exhausted.

Avoiding containment, therefore, has less to do with declarations about the future, and far more to do with sound strategy today: We must prevent ourselves from being maneuvered into a corner where we have little choice other than to accept containment as our de facto Iran policy. Instead of emphasizing what we may do if Iran obtains a nuclear weapon, or is on the cusp of doing so, the U.S. should focus on denying Tehran the necessary building blocks to reach that point — in other words, a nuclear weapons capability.

North Korea provides a case in point. It would surprise most Americans to learn that the United States provided North Korea with over $1.3 billion in assistance from 1995 to 2008. This aid, along with other benefits, such as North Korea’s removal from the list of state sponsors of terrorism and the unfreezing of key assets, was provided even as the U.S. and its allies spent countless dollars more defending themselves from the dangers emanating from Pyongyang, and as North Korea made steady progress toward a nuclear weapon, culminating in a pair of nuclear tests in 2006 and 2009.

The North Korean regime was given relief, not in exchange for irreversible denuclearization, but for “confidence-building measures” (CBMs), which stopped short of addressing Washington’s core concerns. The net effect, however, is that diplomatic confidence has instead been undermined due to the North’s reversals, and Pyongyang has reportedly assembled a nuclear arsenal despite withering international pressure. While Iran and North Korea are different in many regards, these outcomes should nevertheless be bracing for those involved in the nuclear negotiations with Tehran, into which similar language regarding interim agreements and CBMs has crept.

In order for the talks resuming in Baghdad to provide a path to Iran’s denuclearization — rather than a slippery slope towards containment — the Obama administration should avoid three key mistakes.

First, the U.S. should not provide relief from sanctions in exchange for anything less than the full suspension of uranium enrichment by Tehran, and other hard-to-reverse steps such as the removal of Iran’s enriched uranium stocks and dismantlement of its key fuel fabrication facilities.

This is necessary for three reasons: First, it prevents Iran from using the talks simply to derail the pressure campaign against it, only to renege on its commitments later, as it has done in the past. Second, it prevents Iran from legitimizing its uranium enrichment program and thereby gaining technical mastery of the enrichment process, which would be a boon should the regime later kick out inspectors. Finally, it would simplify the task of detecting Iranian cheating. If Iran is permitted a legitimate enrichment program, then the IAEA and Western intelligence agencies must seek to detect diversion of uranium or other material and personnel to a possible parallel, clandestine program, whereas if Iran is not permitted such activities at all, any enrichment-related work would be a red flag and a cause for punitive action.

Second, the U.S. must take care not to reward Iran for provocations. Decision-makers in Tehran cannot help but be pleased that the international community is now focused on Iran’s 19.75 percent enrichment work and treats its 3.5 percent enrichment as a fait accompli, or that their once-secret facilities at Natanz and Arak seem likely to remain in operation in the nuclear proposals put forward by the P5+1.

Washington has tended to focus its energies on each marginal advance by Tehran, such that what the U.S. now appears willing to do in return for a limit on Iran’s enrichment activities is equivalent to what had previously been offered for a full suspension of enrichment. This constant re-drawing of U.S. redlines may seem sensible in the diplomatic heat of battle, but the perverse effect is not to cap Iran’s activities, but to encourage further nuclear progress.

Finally, the U.S. must not neglect the bigger picture. It is a common fault of policymakers — or any decision-maker, for that matter — that near-term costs and benefits are given a disproportionate weight relative to longer-term ones. For example, there is a great deal of analysis of the impact of military action against Iran on the price of oil, but little on the long-term effect of Iran obtaining a nuclear weapon or of a policy of containment on oil prices.

Any nuclear deal which stops short of fulfilling the U.N. Security Council’s repeated demand for the full suspension of uranium enrichment by Iran, among other things, holds the possibility of eroding U.S. influence in the Middle East, undermining U.S. deterrence broadly, strengthening the Iranian regime, and damaging the integrity of the global nonproliferation regime. Washington tends to exaggerate the benefits of a deal with Iran, given the short lifespan of past agreements, and underestimate these long-term costs.

Too often, a compromise on Iran’s nuclear program has been presented by its advocates as a Hobson’s choice — accept a bad deal, or invite military conflict. The real choice is between ineffective diplomacy which provides Tehran with much-sought relief, yet leaves Washington’s concerns unresolved and U.S. policy on a slippery slope towards containment — or a firmer approach which provides Tehran with no benefits until it yields its nuclear weapons capabilities irreversibly. Negotiations and agreements are useful insofar as they advance our national security interests, but should never be seen as ends in themselves. The leverage the U.S. has built up has been hard-won, but can be easily lost, and should not be yielded too readily.

AUTHOR
Michael Singh is managing director of The Washington Institute.