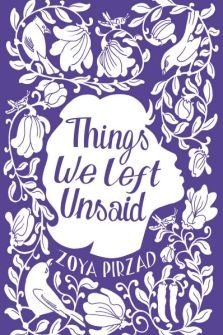 Things We Left Unsaid
A novel
by Zoya Pirzad
Oneworld (2012)

Zoya Pirzad is a renowned Iranian-Armenian writer and novelist. She has written two novels and three collections of short stories, all of which have enjoyed international success. Things We Left Unsaid has been awarded multiple prizes, including the prestigious Houshang Golshiri award for Best Novel of the Year and her most recent collection of stories, The Bitter Taste of Persimmon, won the prize for Best Foreign Book of 2009 in France. She grew up in Abadan, where this novel is set, and now lives in Tehran.

I went inside and locked the door behind me. In Abadan, nobody locked the door in the middle of the day; I only did so when I wanted to make sure I was alone. My penchant for self-criticism meant that I had challenged myself on this more than once: What does locking the door have to do with being alone? To which I always answered: I don’t know. I leaned up against the door and closed my eyes. After the bright light and heat outdoors, and the noise of the children, the cool, quiet chiaroscuro of the house was lovely. The only sound was the monotonous humming of the air conditioners, and the only smell, a hint of Artoush’s cologne hanging in the hallway. I felt like having a coffee.

I looked at the kitchen clock. It was just before ten. Mother and Alice would certainly turn up within half an hour. I’ll wait¸ I thought, so we can have coffee together, and took the pack of cigarettes out of the fridge. Where had I heard that cigarettes would not go stale if kept in the fridge? I didn’t smoke much, but when the house was empty, I liked to sit by the window in the green leather armchair, lean back, puff, and think. In these rare moments of solitude, I tried not to think about daily chores like fixing dinner, getting Armen to study, Artoush’s forgetfulness and indifference. I would reminisce about things I usually didn’t have time to think about. Like our house in Tehran – its little yard and big rooms, its long hallway that was dark even in the middle of the day. My father used to come home at noon, wash his hands and face, sit down at the table and eat a big lunch. He ate whatever Mother had prepared that day with great enthusiasm, listening attentively to her recount the morning’s events in minute detail: how the watermelon she had purchased proved pale and unripe once cut open. About the rising price of pinto beans. About the fights between me and Alice, which were a daily occurrence. Father would mutter things under his breath that we could not quite make out, or if we could, we would not remember. Then he would get up from the table, thank Mother for lunch, and head down to his room, at the end of the somber hallway. It was a small room with brown velvet curtains, always drawn, and cluttered with stuff that Mother would constantly complain about, saying, ‘Why do you keep this junk?!’

After the forty-day commemoration of his death, Mother went into Father’s room with Alice and me, and she cried. ‘God only knows why he kept all this junk.’ The floor-to-ceiling shelves were stuffed with books and newspaper clippings and magazines and half-finished crossword puzzles. There were letters from people none of us knew, not I, nor Mother, nor Alice. There were group pictures of my father with his friends when he was young – friends that none of us had ever seen. Alice choked up and Mother wept. ‘For all these years! Why did he hang on to all this junk?’ I opened the books and closed them. I examined the broken wristwatches, recalling, as I turned them over, how Mother always complained of Father’s lack of punctuality. In an old shoebox I saw rusty razor blades and in a wood crate, a whole assortment of empty aftershave bottles. As far back as I could remember, Father had a bushy beard and he never used aftershave.

In that little room at the end of the hallway Alice found nothing worth keeping. I took the books, and Mother dried her tears, opened the brown velvet curtains and threw out everything she could put her hands on. With the little room at the end of the hallway emptied, Mother felt her principal duty had been accomplished, and with an uncluttered mind, she sat down to mourn for Father. Since then, the phrase, ‘If your late father were alive…’ had become her litany. Little by little we forgot that nothing would have been any different, even if Father were still alive. Father would read his books, solve his crossword puzzles, and eat fatty foods. He would not share his opinion about anything, or, when he did, we would not hear it, or would not remember it. We would get on with our own lives. I would come to Abadan with Artoush and raise my children. Alice would go to England for a few years, ostensibly to study nursing, but secretly hoping to find an English husband. Mother would wash the kitchen floor twice a day, backbite about the sort of women who stored Persian melons and watermelons in the fridge without washing them first, and find some reason to worry every day.

With my head sunk deep in the green chair, I thought of the Simonians. The son’s elegant hands, the mother’s rhinestone embroidered shoes, and Emily, who had yet to speak a word to me. I thought about what kind of woman Emily’s mother must have been. Mother had said, ‘She went crazy and turned up in Namagerd.’ I wondered how old I had been the year we went to Namagerd. Eight? Maybe eleven? Or perhaps about the same age as my twins were now.

I heard the gate squeak and craned my neck to see Mother and Alice coming. In the sharp sunlight, with her flappy yellow dress, my sister looked like a big sunflower among the trees and the hedgerows. Mother, wearing a black dress, looked thin and hunched, like a stick of wood. Armen used to say, ‘When Aunt Alice and Nana walk side by side, they look like Laurel and Hardy.’ My sister was carrying a big cardboard box. I knew what it was without looking. Alice observed her Friday visits to the Mahtab Bakery to buy cream puffs more religiously than her Sunday visits to church.