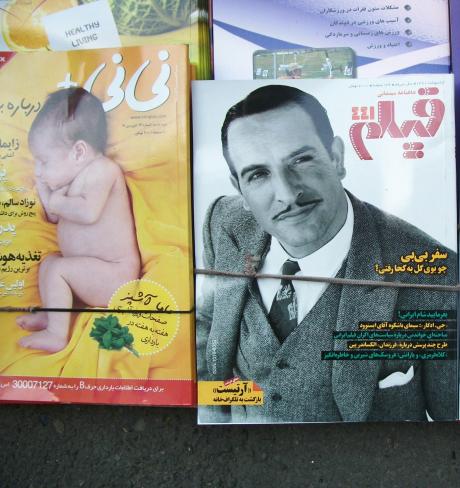 I’ve never had satellite TVs, neither here in US nor in Iran.  I used to watch Iranian TVs when they were on cable but now that they’re all on satelitte TVs I don’t watch them anymore.  Don’t like to have dishes in US and in Iran we didn’t have it until this year.

So this year they put Hotbird (hot damn 😉 next to the new TV which I watched while I was there.  It supposedly gets 800 channels but most of them are duplicate like 200 is the same as 300 or 400, etc.  Some of them are Arabic or European, so when you factor in all these stuff we’re talkin about 30 or so channels including the state run channels.

It was very interesting for me so I thought to write a blog about them and share my experience.  Those of you who have these channels may not think twice about reading my blog, or you may.  First of all before I forget I saw a lot of clips with the logo of our very own Bahram9821 so Bahram jaan congratulations on making it into millions of Iranian homes, both on satellive TV channels and the state run channels!  I saw your logo on some of the clips they used for Iraj Ghaderi’s passing away, for example.

These channels seem to have improved a bit and are not that bad, some of them anyway.  First there are few music video channels and about a few of them dedicated to the thousands of new Singers that I never watched and just clicked away!  I say thousands since they’re really that many.  Go to radiojavan.com and click on the alphabetical link of the Singers and under each alphabet you’ll find hundreds upon hundreds!  They’re mostly one hit wonders and that’s if they’re lucky, otherwise they’re no-hit wonders!

The channel I watched the most was the Movie channel 37 (I think).  They showed movies in the evenings but during the day (Iran time) they showed the old rangarang music videos with the old performers like Googoosh, Haydeh, Mahasti, Aref, Dariush and others.  It was very nice remembering those shows when I used to watch them in black and white TV while they were in color!  We didn’t buy color TV until much later when I was long gone!

Then they were the BBC Persian and VOA.  This year I felt I didn’t miss any news that I’d watch in US.  Actually a lot more since I don’t watch them in US where they focus more on Iran.  The first thing that came to my mind was remembering back during the Shah our family members (parents or uncles or aunts or their spouses) were afraid to have short wave radios that would get other news and even when they tuned them to their desired channels they’d lower the volume so as SAVAK couldn’t hear it!

We’ve come a long way since those days as it relates to world news.  For the most part people know the news about the Islamic Republic as it happens.  During the election cycles they jam these channels but let them go when the (rigged) elections are over!  So stupid!

Then there are the movie channels both state run and satellites.  I watched a lot of movies and series.  I like some of the TV series they show on the state run channels.  They’re like mini soap operas or Mexican soap operas!  You can tell the difference between my generation and the generation that was born after the revolution.  The slank is totally different, not funny and annoying!

Then you had all these talking heads about subjects from health stuff to nonsense that Shirin khanoom wrote about in her blog which is funny when people from Iran call in to chat about nothing!  As well as political honorary PhDs from Moshiri to Holakouee to various Monarchists and all others whom I only watched for a few minutes to see if they’d say something totally out of whack!

Finally they had these extremely annonying commercial breaks that ALWAYS had the same commercial for 15 to 20 minutes!  Arrrgggghh!  They are funny though, at least at first.  Here in US the commercials are mostly about making you feel good about something.  Not so in Iran since they’re designed to put you down and then ask you to buy stuff!

There were a lot of commercials about vitamins to stop hair loss, weight loss and interestingly enough getting taller!  Whenever I visit Iran half of my luggage is dedicated to vitamins for my elderly family and all kinds of senior vitamins, calcium, iron and pills for prostate health or bone strength.  Now in these commercials they’re advertising about the same Vitamins that would actually make you taller!

The way they try to incite you to buy them is to show some beautiful girl saying that his height was an issue!  My friends and peers were criticizing me (sakooft mizadand 🙂 that couldn’t you go any lower!?  He is an embarrasement!  But then he started taking Magnesium/Calcium vitamins and he gained about 10 centimeters!  Now we’re getting married!

So all and all not bad and I had a good time with this hotbird dish.

Photo caption: a snapshot of magazines at a newsstand.