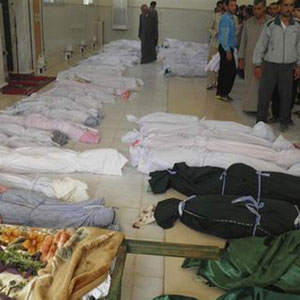 The revolt in Syria does not differ from those that erupted in Tunisia, Bahrain, Egypt or Yemen: it is a revolt against authoritarianism, arbitrariness of the state and corruption.

The response of Assad was a brutal repression against, essentially, non-violent demonstrators. This state of violence has favored the emergence of a self-defense movement, but also the militarization of certain sections of the insurgency. In response to the exploitation of minorities by the Syrian government, Sunni armed groups and fighters of Al Qaeda have infiltrated Syria from Lebanon and Iraq. In many areas, the conflict turned into armed struggle and guerrilla warfare, taking a religious turn.

Arab Gulf leaders, including those of Saudi Arabia, fear the spread of Arab Spring (seeing in Iran the main threat) and they are even trying to present the conflict as a theological war Sunnites against Alawites and Shiites.

Moreover, the main threat for Syria and the region is the extension of a sectarian war.

But what to do?

François Mitterand used to say “do not add war to war”, and he was right. Foreign military intervention is rarely a positive action, the war in Iraq has permanently destroyed the country and it will take decades to rebuild it. That of the west in Afghanistan is a fiasco and on the departure of the western countries, the country will be even more devastated than after the Soviet withdrawal.

With the actual situation in the region, any military action in Syria will lead to a flashover but doing nothing is humanly impossible.