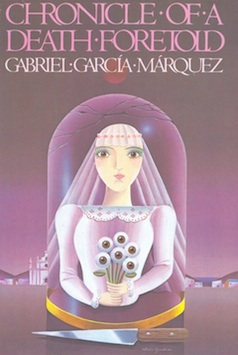 One of the best passages from Chronicle of a Death Foretold by Gabriel García Márquez. A good read although not his best. Three stars out of five.

She wrote a weekly letter for over half a lifetime. ‘Sometimes I couldn’t think of what to say,’ she told me dying with laughter, ‘but it was enough for me to know he was getting them’. At first they were a fiancee’s notes, then they were little messages from a secret lover, perfumed cards from a furtive sweetheart, business papers, love documents, and lastly they were the indignant letters of an abandoned wife who invented cruel illnesses to make him return. One night, in a good mood, she spilled the inkwell over the finished letter and instead of tearing it up she added a postscript: ‘As proof of my love I send you my tears.’ On occasion, tired of weeping, she would make fun of her own madness. The only think that didn’t occur to her was to give up. Nevertheless, he seemed insensible to her delirium; it was like writing to nobody.

…In the tenth year, she was awakened by the certainty that he was naked in her bed. Then she wrote him a feverish letter, twenty pages long, in which without shame she let out the bitter truths that she carried rotting in her heart ever since that ill-fated night. On Friday, she gave it to her postmistress who came Friday afternoons to embroider with her and pick up the letters, and she was convinced that that final alleviation would be the end of her agony. But there was no reply. From the on she was no longer conscious of what she wrote nor to whom she was really writing, but she kept on without quarter for seventeen years.

Halfway through one August day, while she was embroidering with her friends, she head someone coming to the door. She didn’t have to look to see who it was. ‘He was fat and was beginning to lose his hair, and he already needed glasses to see things close by’, she told me. ‘But it was him, God damn it, it was him!’ She was frightened because she knew he was seeing her just as diminished as she saw him, and she didn’t think he had as much love inside as she to bear up under it. His shirt was soaked in sweat, as she had seen him the first time at the fair, and he was wearing the same belt, and carrying the same unstitched saddlebags with silver decorations. Bayardo San Róman took a step forward, unconcerned about the other astonished embroiderers, and laid his saddlebags on the sewing machine

He was carrying a suitcase with clothing in order to stay and another just like it with almost two thousand letters that she had written him. They were arranged by date in bundles tied with colored ribbons, and they were all unopened.