HAFEZ and Shakespeare: on SMILING! 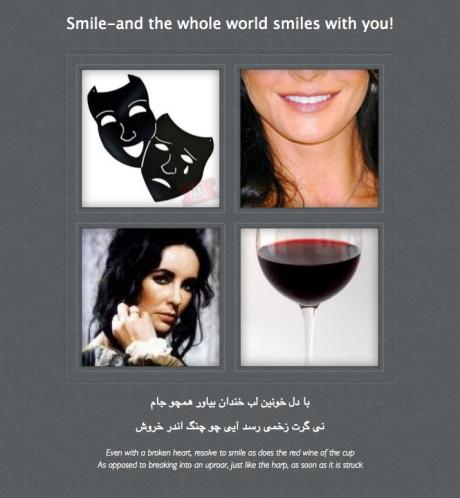 “Smile and the whole world smiles with you”:

We went to see “The Taming of the Shrew” as part of a Shakespeare group here in Washington DC, that I have put together. Studying two masters at the same time – HAFEZ and SHAKESPEARE – seems to effortlessly go together.

The theme today is SMILES. The concept of being positive, of turning to mirth and merriment, especially when faced with adversity.

HAFEZ: Hafez tells us in today’s Blog, to not forget to learn from the cup of wine – in which he would see a smile – to smile even when your heart is bleeding, like the red color of the wine itself, that continues to smile nonetheless. And in contrast,  not start an uproar and much hullabaloo, just as the noises a harp – chang –  makes the second it is plucked or scratched (ie. bothered) with a touch.

Even with a broken heart, resolve to smile – as does the bleeding red wine of the cup

As opposed to breaking into an uproar, which does so the seond that it is plucked, the harp!

SHAKESPEARE: A messenger early in the play reminds us that we are about to watch a “Comedy” – The Taming of the Shrew – and goes on to explain that given that sadness leads to madness – laughter and merriment  protects you from a thousand harms, while lengthening your life:

And melancholy is the nurse of frenzy,

Therefore they thought it good you hear a play

And frame your mind to mirth and merriment,

Which bars a thousand harms and lengthens life. – “The Taming of the Shrew”: Induction – Scene 2.

In Hafez’s example, there is an existing heart-ache, and he asks us to continue smiling while bearing  it. Shakespeare’s quote here is asking you to avoid heartache and melancholy, by turning to merriment. In one, it’s up to you to make the switch within yourself, in the other, you are told to turn to outside entities that would inspire a smile.

Smile, and the world smiles with you! (from the Louis Armstrong song, I blelieve.)

PHOTO:The smiling wine – the masks of comedy and tragedy – and a photo of Elizabeth Taylor who starred in a movie version of “The Taming of the Shrew” opposite Richard Burton.