Another Step Toward War 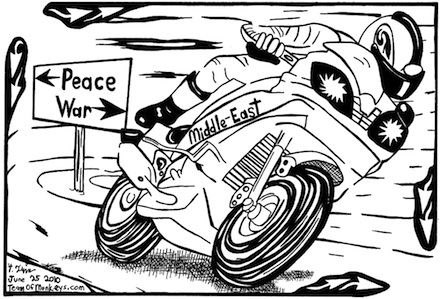 The Moscow round of negotiations over Iran’s nuclear program ended today without discernible progress, though diplomats kept hope alive by scheduling staff-level meetings between the two sides for next month.

If you’re wondering what neoconservatives and other Republican hawks are going to say about this you have two choices: You can spend the next 24 hours combing their blog posts and columns, or you can just take my word for it: they’re all going to say pretty much the same thing. They’re going to say that this just shows there’s no point in talking to Iran, so it’s time to give up on negotiations.

In fact, one of them, Jennifer Rubin, got a head start and said that before this round of talks was even over:

Unless a minor miracles [sic] occurs this round of talks, like all that preceded it will end without tangible movement by Iran. Is it time to admit that neither talking or sanctions are going to shake the mullahs’ determination to obtain nuclear weapons? At this point we should decline to engage in further meaningless talks.

Rubin needn’t have worried that a “miracle” might occur and yield Iranian concessions, because President Obama had already adopted the recommendations of Rubin et. al. and refused to offer anything of significance in return for such concessions. It’s a brilliant ploy: encourage the administration to adopt a bargaining position guaranteed to fail, then blame failure on Iran, after which you can check off the “tried diplomacy” box and proceed directly to “initiate regime change” (whether through war or just through the economic sanctions that, with each round of escalation, are increasingly comparable to war).

As a liberal, I wish I could say that this ploy was being practiced only by Republicans. Alas, it is also reflected in a letter sent to President Obama by 44 Senators, half of whom are Democrats. As Glenn Greenwald notes at Salon, the letter’s “implication is clear: a military attack by the U.S. on Iran is at least justified, if not compelled, if a satisfactory agreement is not quickly reached.” Yet “the letter itself virtually ensures no such agreement is possible” because it insists that the administration demand things of Iran that “everyone knows Iran will never agree to” in the absence of concessions that the letter forbids.

On the brighter side, I guess we should be grateful that in this age of partisan discord 22 Democratic Senators and 22 Republican Senators can agree on anything. My hat’s off to whoever orchestrated this refreshing concord!

AUTHOR
Robert Wright is a senior editor at The Atlantic and the author, most recently, of The Evolution of God, a New York Times bestseller and a finalist for the Pulitzer Prize. Wright is also a fellow at the New America Foundation and editor in chief of Bloggingheads.tv.