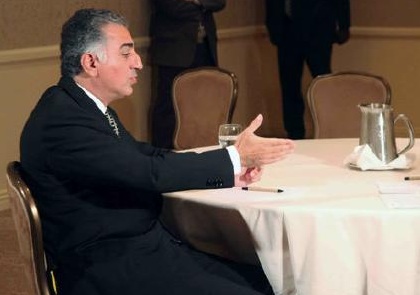 At a dinner gathering last March I was half hoping the guest of honor would decline my request for an interview. If the conversation put him in a positive light most of my Iranian friends would never talk to me again. I wasn’t the only person at the party who felt uneasy about breaking bread with the former crown prince of Iran, Reza Pahlavi. The whole idea behind this gathering of forty or so expats was to see if various pre-revolution foes could find a way to form a unified secular front against the Islamic Republic. The kababs and the various khoresh were delicious, there was plenty of good wine to go around, and the host and hostess were most gracious, but the dining atmosphere reeked of musty grudges from the old monarchy days.

Some of the former Shah opponents were wary of scandal and cries of “sellout” if they were caught hobnobbing with former royalty who might have jailed and tortured half the present guests if the revolution had not ended his line. For this reason only one camera was allowed and photos were taken only upon request. Tentatively taking Reza Pahlavi at his word regarding cooperation–and also trying for that interview–I thought I would show good will and stand in line with some of the royalists to get my picture taken with the guest of honor.

I let the apple-polishing monarchist lady in front of me have the prince all to herself in a pose, mostly because I have a rule to be nice to monarchists. They are an endangered species whose population I would like to see restored to the political ecology inside Iran. The nation needs its traditional institution of monarchy as an emergency backup in case the Islamic Republic is toppled and a secular republic fails. Once the Qom crowd is out of the picture, the crown is the only institution that can keep Iran from shattering into small ethnic states. This is why we should humor folks who dream of a day when every Iranian can be photographed kissing Reza Pahlavi’s boots. If, zabaanam laal, Iran’s wild tries at a secular republic land her into civil war territory, only a pair of royal boots can save her, one for kicking and one for kissing.

But talking realpolitik wasn’t the reason I cornered Reza Pahlavi in between bites of joojeh kabob and polo. A number of better qualified leaders have already thrown their hats in Iran’s democracy ring and there’s little value in the son of the deposed Shah squeezing himself into the queue. As far as I’m concerned, his patriotic duty is to wear those boots and stand ready to crush the bona fide democracy activists if they start killing each other instead of forming a democracy. As for the constitutional monarchy a la king of Sweden theme, the product is a tough sell, at least to me. It’s hard enough building a democracy from scratch without the financial burden of a purely symbolic royal court. So never mind politics, I just wanted to ask Reza Pahlavi for an interview where we would discuss Iranian art and culture, especially the movie A Separation. The film had just won an Oscar for best foreign film and his website had issued a tiny press release congratulating director Asghar Farhadi. By having Reza Pahlavi expand his praise, I hoped to influence expat Iranian attitudes, pausing the knee-jerk reaction that every made-in-Iran success is part of a conspiracy to legitimize the Islamic Republic.

I don’t feel guilty using the prince’s popularity among Iranian expats to get more enthusiasm for the successes of Iranians working in Iran. If the press release wasn’t from an assistant sending flowers for the forgetful boss, Reza Pahlavi should have had no trouble elaborating on his Post-it of praise for A Separation. Of course, in the process of discussing the film–which is a problem book on Iran’s social issues– the would-be king may have revealed his understanding of the lives of his would-be subjects. But his insight or lack thereof was far from my mind. Really! As I said, when it comes to politics I’m interested in Reza Pahlavi’s boot size, not his IQ score.

Few people agree to be interviewed unless there’s something in it for them. Authors, musicians, and actors get publicity and sales. Politicians gain support for themselves or their message. What could a citizen journalist with a tiny readership offer a potential interviewee who already rules BBC, VOA and CNN? Normally nothing, but the game was not over. Reza Pahlavi was there to remind his old foes that the secular opposition, Shah lover or Shah hater, could easily unite behind the ideal of free and honest elections in Iran. Now he could have said that—again! — on BBC, VOA or CNN and reached a far greater number of people than the forty or so people at the gathering. Why was he bothering with us? The answer is, interactivity. A politician can be a guest on every show that can be thumbed into a TV remote, but it will do him no good unless he steps off camera to hug babies, pump hands, attend town meetings, hear people out, and generally show that he is part of the community. The former prince was asking us to accept him, in some capacity, as part of the present community. This is what I could offer him that CNN could not: a temporary pass into the club, if he was politician enough to recognize it.

To make him feel at ease before pitching my interview idea I mentioned a couple of his first cousins I used to know in my high school days. I asked after them, how they are doing, where are they living now. That’s when things started to go wrong. He had only a vague idea where his first cousins may be.  This may not sound unusual in America, except maybe around the Christmas season. Certainly around the Iranian New Year not having a pretty firm idea of how your closest relatives are doing would seem atypical to many Iranians. My own email inbox and Facebook page were overflowing with Nowruz messages from relatives as far removed as my second cousin’s son.  Astonished, my mind flashed to all the beautiful photos of Reza Pahlavi with his wife, children, and mother. Had he isolated himself from his extended kin to the point that the royal family was now effectively only one branch wide? This did not suggest a good sense of community on his part. Maybe he wouldn’t recognize the club-pass tucked inside my interview request. Quickly I moved on to the subject of Iranian film.

With a sigh he uttered a one-sentence generality about how A Separation shows that things are pretty awful for Iranians. He did not mention the film’s historic Best Foreign Film Oscar. I wondered if he had really seen the movie, or even remembered that it had won an Oscar. Because here was an opportunity for him to add to his popularity by showing that he’s on top of Iran’s cultural preoccupation du jour. Pressing him to comment would have embarrassed both of us if he hadn’t seen the film, so I went on to asking if I could arrange an interview with his staff. Hopefully he could see the film by the time our interview happened and would have something to say about it. He seemed open to the offer, so I talked to two of his assistants present at the dinner and they thought that a non-political, culturally themed celebrity interview which included A Separation was a good idea. I got their business cards so that we could remain in touch and get the project rolling.

My email to Reza Pahlavi’s assistants to arrange the interview went unanswered, but about a week later a Reza Pahlavi interview appeared on Radio Farda. I read it with a sense of déjà vu because in this unique celebrity type interview he had answered some questions about A Separation along with discussing other fun subjects of cultural and tabloid interest. It seemed Reza Pahlavi liked the interview angle I pitched to him, but the community he felt comfortable sharing with was the Pahlavi fan club, not ours. As for the venue, he hadn’t risked beyond a US funded radio station.

It takes courage for foes to agree to let bygones be bygones and pool resources. Reza Pahlavi seems to expect all the courage to come from the other side. What this citizen journalist has to report is that the no-longer-young prince is still far from ready to be part of any Iranian opposition community outside his own group of supporters. So should the rest of us write him off completely? No, because the Regime’s secular opposition needs unity more than grudges and, as I explained, we may still need the monarchy for the boot kissing act if it comes to that.

Based on the Reza Pahlavi performance I saw at that dinner, I give him a C minus grade for his potential as an opposition unifier. Yet if my friends threaten to ostracize me for giving him a passing grade, I’m open to negotiating down. And if the Reza Pahlavi team wants to try again, it would serve the interest of unity to give their champion another chance.