Why do Iranians lie? 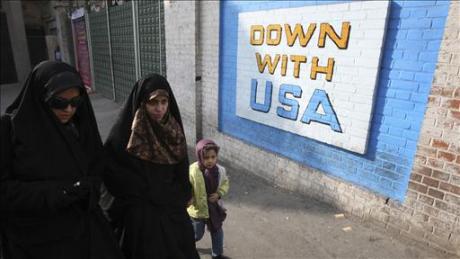 Behold the image above. It says “Down with USA”. It’s what Iranians will translate their famous ideological motto that has been the centerpiece of their foreign policy for 35 years. And it can be seen everywhere in Iran on walls and murals.

Want to know what the true original motto says in Farsi?

It says “DEATH to America”. Not Down with USA, or Down with the govt of USA, or down with some of the evil zionist leaders of America.

The original Farsi slogan specifically and unequivocally calls for the DEATH of America.

But why the mistranslation? Is it an an attempt at deceit? Or is it a cultural defect?

In fact, in today’s Iran, deception and lying are seen as art forms! And lying is even proclaimed in Iran’s Shia state religion. It’s called taqiyeh.

Maybe they do it to survive, as Golshifteh claims. But I think it goes deeper than that. Iranians are liars by nature. Not just because lying is condoned in Shia Islam, but because it’s a cultural value. Consider this: In every day people-to-people exchanges, one sees the following conversation in the Iranian language all too often:

Now what is really being said is:

So, in conclusion, one can deduce: