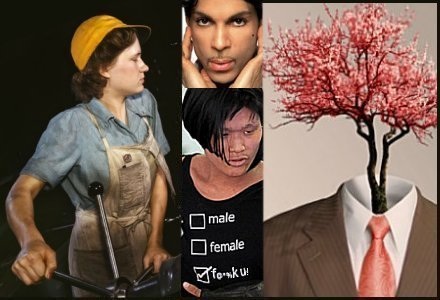 For an Inclusive Constructionist Approach to Gender

While socio-biological theories of gender focus only on the body’s biology and ignore the influences of socio-cultural structures, human agency and discourse,  social constructionist theories focus on socio-cultural institutions and discourse, overlooking materiality, bodies and bodily dimensions of human experience. In other words, neither sociobiology nor social constructionist approaches to gender are adequate.

Essentialism considers gender to be biologically and psychologically innate in men and women. In this approach, gender is defined as characteristics and qualities dwelling within a person, which explain that person’s character, moral view and mental capacities. For instance, woman is considered a universal category that remains the same in every culture and historical period, in every social class and ethnicity, possessing a typical “female way of knowing.”  The problem with this view is that it denies diversity and does not account for the multidimensional and varied qualities and experiences of all women (or people in general). Social constructionism does not see gender as a characteristic of individuals, but as a social construct that identifies these individuals without dwelling within them.

The solution is not to add the biological determinism to the social determinism in order to have a comprehensive account of gender, as these two perspectives do not match and are not complementary. However, as gender has both bodily and socio-cultural dimensions, one has to adopt an approach that recognizes both the biological and social nature of gender.

Two instances of socio-cultural factors in the construction of gender, which prove the fallacy of essentialism, are physical exercise and cosmetic surgery. There are countless numbers of adolescent boys around the world who work out fervently to have muscles, get big and strong and thus become a man, as in all patriarchal cultures, strong muscles and big size are equated with “real masculinity”. The wish to look “masculine” pushes some male adolescents towards the use of steroids in bodybuilding, making them overlook its extremely harmful physical and mental consequences. There are also countless numbers of adolescent girls who put make-up on, let their nose and breasts go under surgeon’s knife to mold their face and body and make themselves beautiful and “feminine.”

So, although partly as a result of biology or genes people possess material bodies with varieties of shape, size, capacities, strength and weaknesses, it is ultimately 1) social factors, namely the models a specific society considers properly “feminine” and “masculine”, and 2) environmental factors such as health habits, nutrition, air, water, exercise and medical attention or lack thereof, which create gendered bodies. This is what we can call the socialness of the body.

In its turn, while social constructionist approach is much more efficient than essentialism to explain gender, it needs to include three crucial issues that it has failed to adequately consider: embodiment, materiality and power.

The human body is a biological system that offers the material requirements for emotion, language, thought, and subjectivity in general. Body is where birth, ageing and death happen, and where pain and pleasure are experienced. It is the container of facial and bodily traits and sexual and reproductive features. It is an object of desires. All physical interactions are possible only with our bodies. We improve our mood and mental health by dancing and exercising with our bodies, which vary in their attributes and abilities. We beautify our bodies by piercing and tattooing and modify them by surgery. Bodies are our external limits and the site where nature and culture converge.

While social constructionism somehow accounts for power in the production of gender, it cannot adequately consider power, since it fails to involve embodiment and materiality. As Foucault demonstrates in “Discipline and Punish” (1995) and as the experiences of individuals whose bodies are judged to be abnormal clearly show, there is a close connection between power and embodiment. (1)

Power not only produces subjectivity by moulding the body, it is also indispensable for seeing the point of subjectivity, since subjectivity transpires from the personal-social histories that are formed by power relationships. Power has a material property as well, such as social violence as a result of claiming resources, and the presence of armies and nuclear, chemical, and biological weapons.

Among the works of social constructionists, only Foucault’s and those inspired by his ideas are based on the association between power and discourse. Nonetheless and whether it is recognized or not, power is always a major factor in the course of social construction, since it is always present in the relations and interactions that constructionism examines. Power becomes visible in discourse and works through it, and in this way analytic approaches to discourse can helpfully depict its outlines and elaborations. Yet, such approaches would prove to be unable to completely tackle their own worth, if discourse is not placed in the embodied and material context that truly gives it meaning. On the other hand, the rejection of both embodiment and materiality drives constructionists to omit power relations, causing the concealment of power.

In my view, one of the most comprehensive constructionist approaches to analyzing and defining gender, which includes all the above factors, has been proposed by Australian sociologist, Raewyn Connell.

The Socialness of the Body

In her ground-breaking book, Masculinities (1995), Connell rightfully states that in gender identity and construction, body must be considered, since bodies are practically the centre of social practices such as sex, labour and sport.

To give an example of the socialness of the body, she discusses sport as a symbol of bodily masculinity, which focuses on the blend of strength and skill. In the mass culture of today’s societies, competitive sports are the primary definer of masculinity. Complex rules guide men’s bodies in competitions, enabling a team of men with superior fitness, teamwork, practice, planning, and intuition to win. The organization of sports as institution establishes specific social relations: competition and hierarchy among men, and exclusion of women. The men’s greater sporting ability is used as a proof of men’s superiority and their entitlement to rule. (2)

Simultaneously, it is these social structures that generate the bodily performances.  Jumping, running and throwing ball outside sportive institutions are not considered sport by any means.  The sportive performance has, at the same time, bodily, kinetic, symbolic and social aspects that depend on each other. Bodily masculinity created through sport is vulnerable when the performance cannot continue due to physical disability.

Heavy manual labour requires strength, endurance, toughness, insensitivity, and group camaraderie. The vulnerable bodily masculinity of industrial workers has been a tool of survival in capitalist class relations and a means of proclaiming power over women. Under the system of profit, workers’ bodies are exhausted to the point of chronic fatigue, automatic wear and tear, and injuries. The decreased strengths put an end to the workers’ job.

For middle-class men in the age of new information technology, the traditional relation between masculinity and machinery disappears. Cybernetics call for deskbound keyboard work, which was previously considered feminine. However, the advertisements of personal computers have reclassified this work as technical and masculine, and a space of competition and power. Middle-class men’s bodies, which have often been disconnected from physical strength, at present see their strength amazingly boosted in the man/machine practices of modern information technology, such as the flourishing industry of violent computer games or in the emphasis on ‘power’ in the graphics and texts of computer magazines.

Therefore, the body is an unavoidable part of masculinity (and femininity), but it is not fixed. The bodily gender activities are part of social activities, can be target of politics, and are certainly part of people’s personal and collective history.

As a result of bodies being both instruments and targets of practice, and the practice itself creating the structures and relations within which bodies are controlled and labelled, a pattern emerges, which Connell calls ’body-reflexive practice.’

Body-reflexive practice occurs within the master configuration of patriarchy, an immense, powerful and complex  structure of social relations; a structure which not only encompasses sexuality, childcare and family ties, but also interactions and cultures, economy and State. The body affects the society, and the society affects the body. The body-reflexive practice always reacts to a specific circumstance, and circumstances are organized in manners that allow only particular options. Practice creates human society. With our actions, we transform every given situation into a new situation. Social structures are established and reestablished by human practice. The reality we inhabit is constructed by practice. Connell says:

“Body-reflexive practices . . . are not internal to the individual. They involve social relations and symbolism; they may well involve large-scale institutions. Particular versions of masculinity [and femininity] are constituted in their circuits as meaningful bodies and embodied meanings. Through body-reflexive practices, more than individual lives are formed: A social world is formed.” (3)

Femininity and masculinity are created by the body-reflexive practices that establish a world with a bodily dimension, without being biologically determined. This world, which is not static by the bodily logic, can be harmful to bodies, as in the case of athletes or manual labourers whose enactments lead to severe injuries or death.

Instead of trying to define masculinity or femininity as a personality type, a behavioural style or a norm, we ought to focus on the relationships and processes through which women and men live their gendered lives. Femininity and masculinity can be developed only in a system of gender relations. Femininity or masculinity is at once a space in gender relations, the practices that enable women and men to connect with that space in gender, and the impacts of these practices in cultures, personalities and bodily experiences.

The conceptualization of gender as practice builds on the persuasive notion of “doing gender” (4). Gender is a situated social practice, actualized through social interaction and rooted in the doing and saying of organizational actors. In the daily practices that enable individuals to interact, gender is continuously negotiated and restructured; the way women and men “do gender” and the way they participate in the making of gender identities by being involved in a process of mutual determination of their position.

No woman can have all the characteristics that are traditionally considered feminine, and no man can possess all the traits traditionally deemed masculine. We live, as social beings, on a socially constructed, complex and shifting continuum.

Connell maintains that there are multiple gender identities or categories and varied forms of sexuality; that there is not one type of masculinity or one type of femininity, but several different masculinities and femininities, each linked to different power structures. Femininities and masculinities are basically relational concepts, and patriarchal societies usually place them as polar opposites, although they are not so. They are the outcome of different situations and experiences of individual women and men in a specific society and specific historical period. They are internalized sex roles, which are performed as the result of socialization by social institutions such as the family, educational system and media. When these agents of socialization change their expectations, sex role norms follow the new requirements. Femininities and masculinities are embedded in the institutional, interactional and individual spaces of society. They have to do with the ways bodies become part of history.

Gender regime is tantamount to gender order’s working through in smaller settings, such as a school, a family or a neighbourhood.