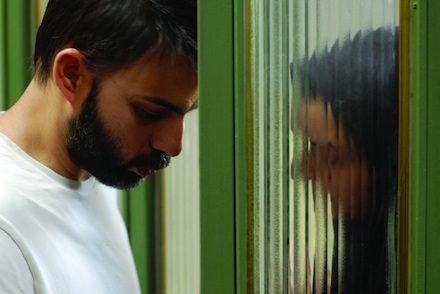 I was not familiar with the films of Asghar Farhadi until a friend sent me a link to the film “A Separation” (“The Separation of Nader from Simin”) and I sat down to watch it with some friends.  Of course I had heard beforehand that this film from Iran had been nominated for an Oscar in 2012.

As its name suggests, the film is the story of Nader’s separation from Simin or, it would be better to say, “The Separation of Simin from Nader!” because it is Simin who, for reasons that will be mentioned later, is asking for the separation and not the other way around.  Nader and Simin’s family includes Nader, Simin and an eleven-year-old daughter by the name of Termeh.  Nader’s father, who is old and suffers from Alzheimers, also lives with them or it would be more accurate to say they live in the father’s house.  About six months ago the family had succeeded in getting a visa from a foreign country, the location of which does not affect the story.  The visa is only valid for 40 more days and Simin has been trying all this time to encourage her husband to emigrate but to no avail.  She finally takes the matter to court and the first scene in the film is about their conversation with the judge.  Apparently the husband is not opposed to the separation but is not willing to allow Termeh to leave there with her mother and the mother is also not willing to leave the country without her daughter.

The reason for Nader’s refusal to emigrate is his father who is not able to go with them and under these conditions Nader does not want to desert him and leave the country.  After all of her unsuccessful efforts and the delay in the court’s ruling, Simin finally decides to return to her father’s home for a while.  But Termeh does not go with her mother and stays with her father.  Later we discover that the reason Termeh stayed with her father is because she knew Simin would not leave the country without her and her motive in doing this was to get them back together.  After Simin leaves home, Nader is forced to hire a young woman who has a five-year-old child to take care of his father when he is not there.  The rest of the film is the story of the encounters that take place between these two families of workers and employers which naturally are representative of the two different classes of society and like another film of Asghar Farhadi’s (“About Elly”) everything begins with a simple plot and gradually becomes more and more complicated to the point where the viewer wonders what else could possibly happen that hasn’t already happened and how can the director pull together everything that’s going on and all the ups and downs of the story and bring it to an end.

The intention here is mostly to talk about the plot.  It seems like the main theme of this film is the confrontation between the new and the old, tradition and modernity, and finally that of rationality versus emotions.  All of the tragedy begins when Nader puts a higher priority on traditionalism and feelings over rationalism and modernity and chooses his father instead of his wife and daughter.  In this film the old father with Alzheimer’s represents tradition, and emotion.  In the first scene of the film Simin points out the same thing to Nader.  Simin says: “You have chosen your father over your daughter and me – a father who doesn’t even know you are his son anymore.”  Nader says in reply: “But I know he is my father”.  A father who doesn’t recognize him anymore, doesn’t speak, and is not very aware of his surroundings.  In the rest of the film we see them dress up the father like a mannequin, put him in the car and drive around the streets because there is no one at home to take care of him.

The subject of the conflict between the old and the new and the weight placed upon tradition in Iran’s culture are not just limited to recorded history but examples of it are seen in mythology and in the national identity of Iranians the “Shahnameh” as well.  In Ferdowsi’s story, when Sohrab goes into battle with his father, despite his youth and vigor, he is beaten by his father who is the personification of experience and tradition. Whereas in Greek mythology Oedipus goes to war with his father, defeats him and marries his mother – a victory of the young over the old, modernity over traditions.

Also both in the religion and in the Iranian national epic it is told how during the time of coexistence between Iranians and Indians Ahura Mithra was shared by both as the God of love, the sun, and contracts.   But when Zoroaster revealed his prophecy to the Iranians, his first action was to demote Ahura Mithra and raise up Ahura Mazda – the God of Wisdom; in other words elevating wisdom and reason over love and emotion.  No wonder Ferdowsi began the Shahnameh with the line:  “In the name of the spirit and wisdom”.  So, as indicated, rationality is deeply rooted in Iran’s culture and religion.

Another point is that in traditional societies like Iran’s the people should be made to understand that love is not just about being close together, saying it out loud, and spending our lives taking care of others but rather that with wisdom and reason one can find better ways to make the situation for both parties more beneficial and acceptable.

If the developed countries of the world have established facilities and homes for the aged and for those afflicted with Alzheimer’s it doesn’t mean they love their parents any less than those in traditional Eastern societies but rather that a life of technology and rationality have led them down this path.

Something else worth noting in this film is that it was the woman in the family who wanted to leave the country.  If it had been the other way around, the father would easily be able to legally take his daughter and leave without the mother’s consent.  A deeper and more important question is whether it is possible for a woman, despite her husband’s will, to stay in Iran to take care of her senile and sick father?  Could she refuse to cooperate, and not leave with her husband and daughter without suffering the condemnation and rebuke of others?

The deep, rooted and constructive beliefs of ordinary true-hearted and simple people are another thing that can have an impact on viewers. Only her sincere religious belief prevents the servant Razieh from accepting the money because she is not sure if they are entitled to it or not. Despite all her needs, the pressure from her husband, and the possibility of a better future for her daughter with this money, because she was not sure who the real culprit was, she was not prepared to swear on the Qoran and as a result lose her husband and her married life. From this one can conclude that, in sincere and unpretentious religious beliefs, morality can be worthwhile and have an impact in edifying society. Perhaps the director of the film also wants to show the contrast between the religious beliefs of true-hearted and honest people and the claims of piety and asceticism of those who in the words of Hafez put on a big show on the pulpit but in private do something altogether different and who bring up religion to use the misfortunes of the people for their own benefit.

The end of the film, like most of the films of veteran Iranian director Abbas Kiarostami is left up to the viewer.  Viewers can express all their reasons to justify their views and it will still be just their own personal viewpoint and not reality.  Another thing in the film that is left up to the viewer is the money that was stolen from the safe in Nader’s house.  One could spend hours talking about who stole the money.  Once again, like Kiarostami’s films, the viewer will be thinking about the film long after seeing it and will be going over the plot and the scenes in his mind.

From a technical standpoint, the film editing is exceptional.  There is not a single unnecessary or redundant scene.  All of the scenes and sequences are connected and complement one another.  The cinematography makes the best use of shots to show the film’s plot.  The shots are all tight, closed and succinct and demonstrate very well the suffocation, dire living conditions, and restrictions imposed on the people of that land.  The actors perform with such skill and spontaneity that the film seems more like a documentary than a regular movie to the point where the viewer thinks the actors are playing out their actual roles in their lives.  Of all the talented actors in the film, the acting of Sareh Bayat (Razieh) and Shahab Hosseini (Razieh’s husband) is at the height of their artistry and abilities.  I hope these actors will not escape the notice of those involved in the Oscar nominations.