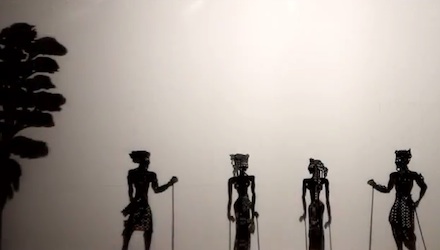 In Bahram Beyzaei’s shadow play, Jana and Baladoor, Jana is just one character among several who aids or battles the brave Baladoor in her quest to restore the primordial universe.  So I wonder why Jana gets top billing in a play that’s really about the adventures of her sister, Baladoor. After all, The Epic of Gilgamesh or The Odyssey are aptly named after the character who is present in every scene in some way. If I had to rank the supporting characters in order of importance, Jana would come in third, after Borzoo, the heroine’s man-animal lover, and the half-demon gypsy woman who is a double agent in this cold war between Good and Evil. And by cold war I don’t mean détente and diplomacy, because there’s plenty of killing. I mean the story is literally set in a frozen wasteland universe. The world is icy and stale because demons have imprisoned the personifications of Fire and Air, Baladoor’s brothers.

Baladoor herself represents Water in this story, which is how she is able to have wild sex after every adventure and still remain a virgin.  Water returns to its original state after being perturbed, and water cleanses. There are also references in this symbol-rich play to water’s power to reflect. Baladoor’s main strength in the story, however, is her steadfastness. Despite many temptations to abandon her quest she is as relentless as mountain snowmelt working its way down to the oceans. It seems willpower was the element that saved the universe and made possible the world as we know it!

The shadow play is part of Bahram Beyzaie’s lifelong effort to revive Iranian theatre art from centuries of deep freeze. The director’s willpower combined with his poetic genius and Tolkienseque mastery of myth and folklore has created some of Iran’s greatest examples of modern theater and cinema. One can draw a parallel between the playwright and his heroine in their respective quests to bring a breath of fresh air to smothered creativities and to ignite new fires in a landscape long frozen by repression.

It is hard to say how far Iranian shadow play would have advanced as an art form if it had not been forgotten centuries ago, but Jana and Baladoor attempts to leapfrog the evolutionary steps by borrowing DNA from its extant sister art forms such as Iranian puppet theater, the national epic story telling tradition, religious passion play singing and wedding entertainer customs. This patchwork is strongly held together by insightful, witty, and progressive writing on Beyzaie’s part. For example, the fact that Baladoor’s tale turns the damsel-in-distress theme on its head is hard to miss. The male heroes spend most of their stage time hanging upside down in chains while their sister, Baladoor, schemes against the enemy, battles monsters, and copulates with her lover as many times in a night as there are animal species on the planet.

Jana and Baladoor will have to be performed in private gatherings inside Iran due to sexuality involving incest, lesbianism, and suggestions of bestiality. For the play to have better odds of success outside of Iran two barriers have to be overcome, one relatively easy to hurdle and the other harder. First, story narration in English would be helpful; the supertitles didn’t work. Going back and forth between the shadow screen and text causes more fatigue and distraction than going back and forth between subtitles and film. Unless the shadows are projected in color—clobbering much of the play’s atmosphere of primordial mystery–the text screen competes too strongly with the shadows. The breathtaking puppet designs by Mokhtar Paki deserve to be appreciated without an all-text slide show on top. An English version of a play based on Iranian mythology is not as daunting as it seems. Peter Brook’s play Mahabharata (1985) was quite successful in the West. And the criticism from Indian critics questioning authenticity of interpretation would not apply in the case of Jana and Baladoor as Beyzaie is himself Iranian.

The harder issue has to do with the length of the play. Jana and Baladoor is three hours long, which is fine for a play involving live actors (Mahabharata is nine hours long!), but shadow watching can be hard on the soul after a couple of hours. I didn’t mind it because long duration in a live act adds a sense of ceremony to the experience, making the work’s impact permanent. Unfortunately, the shortening of Jana and Baladoor would require more than just cutting scenes; it would involve rewriting a shorter play without diminishing the epic sense of timelessness that the original so strongly conveys. Not an easy task.

I took an American friend to the Jana and Baladoor production in Palo Alto, California partly to see in his reactions how Bahram Beyzaie’s works can be better appreciated by a Western audience. He liked the stories and characters and appreciated the experience but complained about the supertitles and the play’s length. Now Bahranm Beyzaie is notorious for shunning compromise when it comes to his art. In this case, however, he will have to find a way. Though the artist seems quite aware that his works offer Iranian theatre an alternative to Western motifs, it would be well worth seeing if his genius can go even further to offer Western theatre alternatives that are based on Iranian motifs.