Prisoner of the Day: Saeed Zeinali 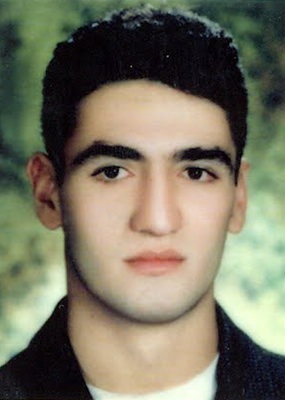 Rooz Online: Saeed Zeinali, 22, a Tehran University Computer Science graduate, was arrested at his home on July 10,1999, five days after the 5 July 1999 (18 Tir 1378) unrest at Tehran University dormitories in Tehran. He was allowed to make one phone call to his family three months later. Since then, his family have not heard from him, have not seen him, and have no information about his fate and possible detention location. His family’s persistent pursuit of news about him has proven fruitless. In 2010, Zeinali’s mother, Akram Neghabi, and his sister were arrested and detained inside the Intelligence Ministry’s Ward 209 at Evin Prison for two months, following Akram Neghabi’s September 2009 interview with Voice of America about her missing son’s case.

In a 2011 interview with Rooz Online, 12 years after Zeinali’s arrest, his mother said that the authorities have kept silent about whether Saeed Zeinali is still alive. She said about her son’s arrest, “On July 10, 1999, three men came to our house. They came in and said we have some questions of Saeed. Saeed’s father was at work. I kept asking them where they were taking Saeed. They said we have a few questions and that Saeed will be back soon. They took him. He called three months later and talked for two minutes. He said, ‘I am well. Follow up my case.’ He didn’t say where he was, nor why they had taken him, or what he had done. We followed up with every conceivable organization thousands of times, but without any results. Six months after Saeed’s phone call, I believe it was on the birthday of Imam Ali, they called us and said, “we are calling to give you [good] news about Saeed’s health and to make you happy.’ No matter how much we asked and we begged and insisted to know where they were calling from and where Saeed was, they didn’t give us any answers.” Asked whether the arresting forces told from which organization they had come, or whether they had presented an arrest warrant, she said, “They didn’t say where they had come from. I was in such bad shape I didn’t ask them. They said they had to search the house and they did. I was beside myself looking at Saeed’s pale face. I didn’t know then that I should ask for a warrant…”

“When we ask them about Saeed, they keep saying that they are following up his case. They have not told us yet where Saeed is and what has happened to him, is he alive or dead. Someone from Mr. Naghdi’s Office [Head of Police Intelligence Unit at the time] told us back then that ‘Your kid has been arrested by our Operations Unit, don’t come here uninvited; whenever it’s necessary, we will contact you ourselves,’ but nothing happened. When Mr. Qalibaf became the Chief of Police, Colonel Fatemi called from his office and said to take a photo of saeed to them to Follow up his case. Saeed’s father took the photo. We went the following week and they said that they would grant us visitation, but then they said that it was out of their control and that they were sorry. Four years ago, Mr. Salarkia [former Deputy Tehran Prosecutor in charge of Prisons] said that they had talked with the Intelligence Ministry and that we were going to be allowed to visit Saeed. We went to Mr. Mortazavi’s [former Tehran Prosecutor] office. They told us to come back in ten days, and every ten days, they kept postponing. In the end they said, “Go. We will contact you whenever necessary, as we ourselves are not allowed to see him.’ Over these years, we have a box full of correspondence reference numbers for the letters we have sent to different organizations rsuch as the Supreme Leader’s Office, the Intelligence Ministry, the Interior Ministry, the Prosecutor’s Office, and wherever imaginable, without any results,” Saeed Zenali’s mother told Rooz Online.

Asked whether they were ever able to find out Saeed Zeinali’s detention location, Akram Neghabi said, “No. They never give us any answers about this. We went to the Prosecutor’s Office so often, they contacted us from Mr. [Jafari] Dolatabadi’s [Tehran Prosecutor] Office to take whatever letters and documents we have. We took them the documents but since then, whenever we go there they say that, ‘Mr. Dolatabadi is following up this case and when we have any results we will inform you.’ My husband went there again all day, but there is no news. They give us no answers, they just tell us to wait and that they will pursue it. Over the years, they have told us to go different places, and from there to other locations, and yet to others. There is no organization we have not visited. They don’t tell us whether he is alive or dead, or where he is.”

According to Rooz Online’s 8 July report, there is no development in Saeed Zenali’s case.

This man was featured as Prisoner of the Day on July 10, 2012 on the site. This blog is my tribute to a young man who was arrested before his mother’s eyes 13 years ago, and who has not been seen again since; a man whose story deserve respect and reflection. Please only leave original and directly related comments about this man here or none at all. No propaganda, no slogans, no cliche comments, and no fighting, please, or I will flag your comments. If you are doubtful about what to say, say nothing at all. Admin, this blog is a copy/paste. This is the source: http://iranian.com/main/2012/jul/saeed-zeinali…