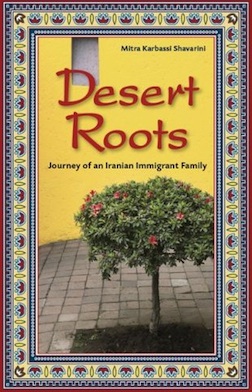 It was my mother who gave me the news: after thirty-three years, they were going back home to Iran. She told me my father had made his decision.

I had always sensed my parents’ connection to Iran, but it never occurred to me that they would yield to the calling of their birthplace. The Iran they had left three decades earlier wasn’t the same Iran that exists today. I asked myself why my father would decide it was time to go back, especially considering the fact that his damnation of the Islamic government that had replaced the Persian monarchy, and of the clerics who forced him into self-exile, was a daily occurrence in our household.

Immigrants like my parents, who long to one day return to their homeland, more often than not pine for a country that no longer exists. They become exiles not of one land but of two countries.

Why does an immigrant, even one who, like my father, a proud naturalized U.S. citizen, decide it’s time to go back home? What propels them back to their country of origin? When does the feeling of homeland become all consuming, its call too difficult to ignore?

Within Desert Roots lies my quest to understand my father’s decision to return to Iran—the whys, the hows—which ultimately led me to trace our family history. The story is of a uniquely Iranian experience—of the home culture, of rootedness, and of exile. It is a story of Iran beyond the Revolution, beyond politics—the story of an Iranian family whose tradition of endurance reaches back centuries. It is a story I hope my children will pass on to theirs.

I hold my hand out and invite you to join me in my parents’ journey to—and eventually from—America.

Neither am I happy in Ghorbat, nor in my homeland
O’God. I hope fate turns this dark destiny of mine.
—Persian proverb

Farsi is a language of subtleties, thus there is no exact English translation for the Persian word ghorbat: nostalgia, exile, longing for homeland, feeling yourself a stranger is close to the idea. To truly understand ghorbat, one must live the word, feel its burden. It is one of those intangibles, like heartache, or when you realize you are lost. Yearning.

I’m nine years old. I am wearing a neatly ironed private school uniform, white ankle socks, and shiny patent leather shoes my mother bought me in one of those fancy stores in downtown Tehran. A circle of twenty girls surrounds me, all shrieking with delight. It’s my last day at Ravesh Noa, a private girls’ school. Started by Anoshirvan Rohani, a modern musician and songwriter, and modeled after Western schools, Ravesh Noa is the rage among the sliver of society that now constitutes Iran’s middle class. Since my father has already left the country, a driver from his company has come to pick me up. I have a hard time making my way through the little bodies who all want to touch “the girl who is lucky enough to go to America.”

Twenty years later, I dream of my maternal grandmother. She waits behind a glass door. Her hair is pulled back, tight at the part. She wears a weathered sweater that reminds me of mothballs. It’s the color of embers, that particular glow right before they turn to ash. Before it fades, like memory, my grandmother says, “I see you.” From the other side of the glass I stare at the lines on her face, shaped and grooved like destiny. I cannot open the glass door between us. I wake up in tears. Furious.

She stands in the cluttered garage surrounded by boxes, holding a dusty and long untouched ceramic bowl, a school project her daughter made in the fourth grade. She has kept this clay piece, roughly shaped by little fingers, for many years. Year after year she has put the stuff of her life into boxes, thinking one day she may want them. That someday never came. Instead, she finds herself picking through boxes, meeting strange memories. She is convinced that, at seventy-four years of age, it is now time to put her boxes in order.

She traces where her daughter’s fingers had been thirty-three years earlier. She feels again the simple joy she felt the day her daughter brought home this shiny, glazed-hardened earth from school, proud to show off her handicraft. She had a dishtowel in her hands when her daughter danced into the kitchen. She remembers thinking, How lucky my girl is to go to school while we’re in America. On that day she told her daughter, “Your path in life will be different from mine.”

Now, standing in her garage, she feels that she can taste the memory. She almost feels she can taste the little clay bowl—a tormenting mixture of fondness and sadness. She wants to spit it out . . . or hold it in. She doesn’t know. So many things stir in her heart.

Her little girl’s bowl is America.

Thirty-three years ago they came to America. The move was meant to be temporary . . . at least that’s what they assumed. She never imagined that they would become exiles from Iran. Isolated and alone—exiles from America itself. Their days turned into years, and years into old age. She lets out a loud sigh, so loud that it screams with pain.

“Is it really time to go back?” she asks herself. Then, pausing a moment, she adds, “home.” She feels glad but uncertain. Even her husband grudgingly agrees that their exile from Iran has come to an end. In these final years of life, the call of Iran—their land—has become too strong to ignore. She feels that the very earth of their homeland is pulling them back, drawing her and her husband back to join their ancestors. Just as her daughter dug her small hands into the wet American clay that would shape her life in this country, she longs to be back on the ground worked by her people, by her ancestors. She thinks of her father learning the Tayamom from the Koran: in the absence of water we are cleansed by God’s earth, and the rock along the road becomes the prayer stone. Perhaps it is the duty of Persians to return home. Perhaps we will be washed clean by the soil of Iran.