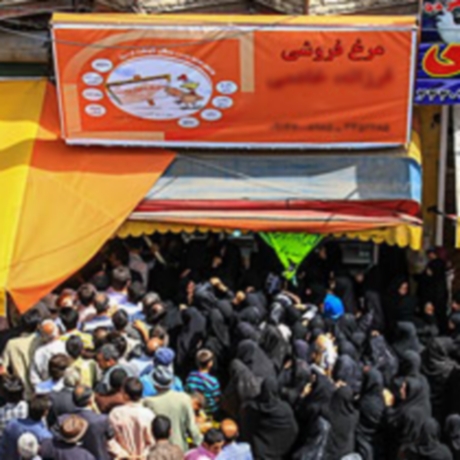 The setting was beastly and the scorching summer heat was unbearable.  The swelter had mixed with the air pollution, and with the addition of the micro-sized dust particles in the atmosphere, the shallowest breaths had become difficult.  Customarily, the crowd had segregated itself into two separate groups, male and female, but also as usual, mixing of opposite genders had occurred at the boundary of the two.  As waiting for the arrival of the overdue delivery truck grew longer, so did the crowd’s patience grow shorter and shorter with every passing minute.  The crowd was sparse at first, but as news of the government-subsidized pricing of its load spread in the neighborhood, it multiplied in number, and then it began to thrust itself forward, as if there was an unseen force pushing them towards the entrance of the store, and then into it.  Like many others, an exhausted young woman in a skimpy chador was trapped in this heap of hungry creatures, lurking anxiously for the moment when they would get their hands on the meat.

It was then that in the crushing push of the crowd, she felt a growing manhood behind her.  It was not ignorable.  She tried to move to the side, move forward, move somewhere else, move anywhere else but there.  But the trap, set by the crowd, was insurmountable.  With red blood pounding into her face, she wanted to turn around and look at him, but for what reason?  What difference did it make what he looked like?  Then she thought, he must be looking like all the others, all the ones in buses, in the subway, all the others in the streets, in sidewalks, in the parks.

At first, the crowd murmured about the long-delayed truck, but then they bellowed under their breaths, and then yelled profanity at the heaven and earth.  A man shouted, “Look at this miserable life!”  Another man screamed, “What happened to the petroleum revenue, promised to be delivered to our homes!”  The crowd chuckled uncomfortably, while a woman yelled at her daughter, at the border of the crowd, not to wonder off too far.  Her daughter yelled back, “No, dear maman.  I’ll be right around here.  Don’t worry.  Do you hear?”

The pushing forward continued, and with each surge the man’s manhood grew harder.  The woman’s left hand was holding her chador tightly under her chin, and her right hand was trapped in between her and another woman in front of her, but she eventually managed to wiggle it free, push it down, move it behind her, reach it under her chador, and bring it up to his manhood, by then a complete manliness from the excitement.  The man leaned back slightly, allowing her hand to enter into his loose trousers.  A man in the crowd shouted, “By next year we’ll be eating cats and dogs!”  The crowd giggled, and the woman squeezed the man behind her.  The man jerked backward, but she pulled him forward.  He waited for a moment, but the woman squeezed him harder.  His hands were trapped by then, below her waist, as he attempted to fondle her.  He tried to free them, but each time he tried she squeezed him even harder than before, till he understood the implication of trying to free himself.

The delivery truck finally arrived.  The crowd had to move away from the shop, for the baskets of plastic wrapped chickens to be transferred to the store.  After much yelling, the crowd moved back and forth, and the people loosened their tight grips on each, and her bloody hand was once again free.  She turned around and looked.  Everyone in the crowd was suffering the same in the unbearable sweltering heat, yet they were all resolute in their determination to get their hands on another creature and sink their teeth into its flesh.