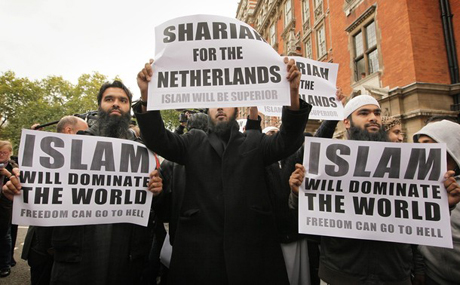 When he came out of the lift his sight made me uncomfortable. He was not a midget but he was not far from it either. He hardly reached below my chest but his head was even bigger than mine. With a long messy beard, a loose jacket, no tie, and a white shirt badly tucked into his loose trousers he was every bit a Muslim jihadist. You could just picture him jumping up and down outside the US embassy in London, burning US flag and yelling down with the USA or holding banners outside the British Parliament demanding the imposition of the Sharia law in the Netherland upon Girt Wilders visit to the UK.

I felt awkward as I felt that I had not managed to hide my disapproval of him. I offered him a chair and he sat there with his feet dangling in the air just like a little child whose been taken to a restaurant. Looking at him I realised that I had indeed failed to hide my displeasure and now he equally seemed tense.

I had read his CV and talked to him on the phone prior to the interview and he was my second choice. Could I now punish him for his beliefs? I scolded myself for being so unfair and biased. How could you claim yourself to be a believer in equal opportunity if you cannot conduct it in practice? You came to this country and this society has treated you as one of its own, now it’s your turn to treat others as equal. Let’s see your fairness in action now.

I regained my control and embarrassed of my initial patronising thoughts, smiled and cracked a few jokes to make him more relaxed.  He smiled back and seemed to feel more comfortable. He had finished his degree in IT more than a year ago and had been working in a restaurant since. This job could be his entry into the professional world and my Middle Eastern name may have had given him the hope that he would receive a more favourable treatment, or at least an equal treatment.

The interview went well and he managed to hold to the position of the second choice all the way through until almost the end when I asked him if he had any other question for me. He thanked me for having made everything clear already and said:

– I only have one question left, is there a prayer room in the building brother?

– In that case can I say my daily prayers in the office?

I was much more in control now, so smiled and said of course, that would be no problem at all, and at the same time thought that there would be no way that I would have him there.

I tried to help you but you just can’t let that happen. You must shove your Islam in everyone’s face. No, I cannot have you pointing your bum at the sky everyday bowing to your own stupidity. This would cause friction here. You will be wasting if not stealing the time for which you get paid to work, and no, you cannot do it during your lunch break, that is for you to eat and have the stamina to work. And most importantly, the people of this country have defeated the evil of religion and banned the display of religious symbols in any place of work in the UK, only for you to come here and insist on your daily humility rituals and resurgence of the evil of religion. There is a good reason that you work in a kitchen in an Indian restaurant and that will not change soon.

The position was eventually offered to my first choice, an Iranian who had changed his religion from Islam to Christianity. I asked him what made him to change his religion and he said that he found Christianity more in line with his ideas of a true religion but we both knew that he was lying.