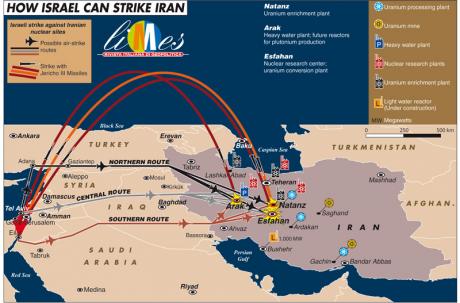 Iran’s nuke bomb possession is a foremost anxiety within Sunni Saudi Petrolistan. The issue of Iran’s ‘having a nuke’ will change the unilaterally ‘imposed balance of fear’ by Israel in the area. An Iranian nuke will dent and minimize Israel’s tactical prime directive i.e. Israel’s present capacity to compel its directives and political resolve at will. Israel’s tactical principle is straight forward: no regional power is to be permitted to get to the point of tactical equality. Moreover, Iranian nukes will hypothetically give rise to a survivability hazard to Israel. This what worries Israelis the most. Israeli freedom of action within the region is under danger from likelihood of Iranian nukes.

With one-sided nuclear supremacy in the Middle East, Israel tactical dominance and existence is assured in the region. This is Israel’s corner stone strategy. Saudis as major voice of Islam do not seem to be too concerned with Israeli nukes but they are very concerned with Iranian nukes. Iranians on the other hand want to achieve that equivalence to establish themselves as the primary powerbrokers of the region ahead of Saudi Kingdom. Iranian nuke is a two edged sword, it will lead to comprehensive dilution of Israeli diplomatic and strategic muscle on one hand and compromise the demographic authority of Saudi regime acutely. Shiite pre-dominance in demographic and numbers from Basra down to Oman is a tinderbox that Iranians will wish to ignite, the will to export the Islamic revolution has not died in the heart of Imam Khamenei. Wiki Leaks classified cables highlighted that Saudi Arabia are keen to see Iran’s nuclear sites neutralised. U.S. State Department documents showed that , Bahrain’s King Hamad bin Isa al-Khalifa indicated to Gen. David Petraeus in 2009 that Iran’s nuclear program should be stopped, saying, “The danger of letting it go on is greater than the danger of stopping it.”

In event of the materialization of nuclear gap between Saudi and Iran; Iran as a principal power broker will hold political sway in the Eastern oil rich provinces where Shiites are in absolute majority. This is the biggest threat to Saudis, Iranian sponsored troubles can lead to probable sectarian demographic division of Saudi peninsula. The marriage of Nejd- Hejaz and Dhahran is not a 5000 year old occurrence. Therefore Iranian bomb is a ‘no go area’ for the Peninsular Arabs as well as Israel, they both agree that Iran needs to be sterilized from achieving this dangerous nuclear parity. Iranian nuke will lead to total reconfiguration of nuclear assets in the region, it may lead Saudis to go ‘nuclear’ as well or seek protection or an nuclear umbrella. We all know from whom!