Does a Romney Administration Mean War with Iran? 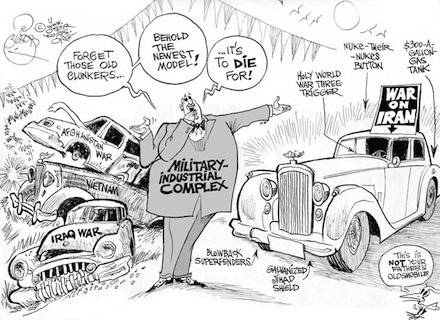 This article is specifically written for Iranian-Americans that consistently vote Republican.

To generalize, but safe to say, most of this group of Iranians are diehard Royalists, rich, and generally politically retarded. Please excuse the use of the word “retarded” but anybody that listens to Rush Limbaugh can’t be described in any other way. One of my best friends listens to Rush – and falls into the above category — and I hate to say this, but he is without a doubt, politically retarded; yes, we make allowances for him.

But back to Romney and War with Iran, which is really what this article is about.

First of all Romney is just a front as was Bush. What is alarming is that the same crowd with the same mindset stands behind Romney as stood behind Bush when it comes to foreign policy.

Who are these people? Essentially they are neoconservatives who prescribe to the marching orders set out by the Project for the New American Century think tank, or to be blunt in the interest of clarity, they are greedy bloodthirsty warmongering imperialists. You can find more on PNAC at the two links below:

Below are links and excerpts from recent writings by Prof. Juan Cole, Prof. Muhammad Sahimi, and Justin Raimondo, who all raise this very issue; Does a Romney Administration mean war with Iran?

Now if the answer is yes, then it does not matter if you are a Republican, a Royalists, or listen to Rush Limbaugh, but you must NOT vote for Romney in November. I am not saying vote for Obama, because he has been an utter disaster on so many fronts, but whatever you do, don’t vote for Romney, because as things are shaping up, a vote for Romeny means a vote for war with Iran.

“The American Republican Party Convention in Tampa ironically coincides with the Non-Aligned Movement meeting in Tehran, Iran. Were nominee Mitt Romney to win, he has signaled a willingness to take military action against Iran’s civilian nuclear enrichment facilities, which the Iranians say are for the production of electricity via nuclear reactors, but which Romney claims are intended to produce a nuclear warhead. Romney is also open to sending US troops into Iran-backed Syria. The two conventions, one of white American millionaires and their hangers-on, and the other of global South countries unwilling to subordinate themselves to the American corporate establishment, are harbingers of a new global conflict that could have a dire impact on oil prices and the American and world economy.”

“Last October, the Romney campaign officially announced its team of 24 “special advisers” on foreign policy and national security, two thirds of whom served under President George W. Bush, who led one of the most hawkish administrations in memory. In 1998, three of those advisers (Paula Dobriansky, Robert Kagan, and Vin Weber) signed the infamous letter sent by the neoconservative Project for the New American Century that urged President Bill Clinton to make toppling the regime of Saddam Hussein official U.S. policy, a wish eventually fulfilled with the invasion of Iraq in 2003. A total of 40 foreign policy advisers to Romney have now been identified — including unofficial ones such as former Secretaries of State Henry Kissinger, George Shultz, and James Baker — over 70 percent of whom served under Bush. These simple statistics alone provide important clues to what a Romney administration’s foreign policy would look like.”

“War with Iran is an enormously unpopular idea – unless you’re a crazed born-again Christian of the sort who believes America is Babylon, the end times are imminent, and loyalty to Israel is God’s will. These deluded doomsday dispensationalists are the bedrock of the GOP’s southern and Midwestern activist base, and revving these people up is what the festivities in Tampa are all about. The question is: how many normal Americans are repulsed by this kind of rhetoric?”

And in case you have been watching the Republican Convention and need to rinse out that flag waving propaganda out of your brain cells and want to know just how huge a sleazy bastard Romney is I suggest reading “Greed and Debt”, a brilliant article by Matt Taibbi, which I’ve provided the link for plus an excerpt.

“Greed and Debt: The True Story of Mitt Romney and Bain Capital”
by Matt Taibbi.

“By making debt the centerpiece of his campaign, Romney was making a calculated bluff of historic dimensions – placing a massive all-in bet on the rank incompetence of the American press corps. The result has been a brilliant comedy: A man makes a $250 million fortune loading up companies with debt and then extracting million-dollar fees from those same companies, in exchange for the generous service of telling them who needs to be fired in order to finance the debt payments he saddled them with in the first place. That same man then runs for president riding an image of children roasting on flames of debt, choosing as his running mate perhaps the only politician in America more pompous and self-righteous on the subject of the evils of borrowed money than the candidate himself. If Romney pulls off this whopper, you’ll have to tip your hat to him: No one in history has ever successfully run for president riding this big of a lie. It’s almost enough to make you think he really is qualified for the White House.”

“The unlikeliness of Romney’s gambit isn’t simply a reflection of his own artlessly unapologetic mindset – it stands as an emblem for the resiliency of the entire sociopathic Wall Street set he represents. Four years ago, the Mitt Romneys of the world nearly destroyed the global economy with their greed, shortsightedness and – most notably – wildly irresponsible use of debt in pursuit of personal profit. The sight was so disgusting that people everywhere were ready to drop an H-bomb on Lower Manhattan and bayonet the survivors. But today that same insane greed ethos, that same belief in the lunatic pursuit of instant borrowed millions – it’s dusted itself off, it’s had a shave and a shoeshine, and it’s back out there running for president.”